The entreé list is brief but varied, ranging from the familiar to the novel 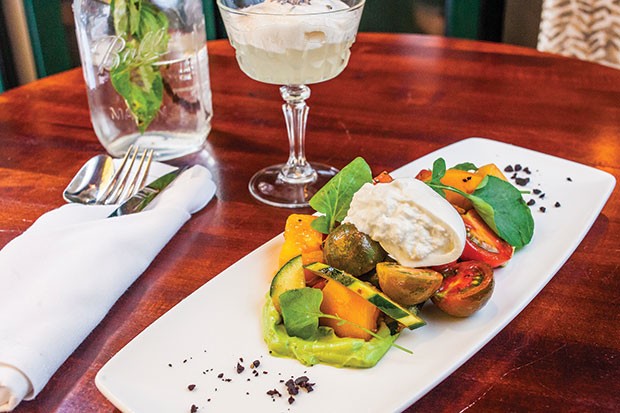 Twelve years is a long time in the restaurant industry.

Some local restaurants that last that long are destined to become institutions, places everyone, whether citizen or visitor, must dine to earn their Pittsburgh cred. Others grow tired and fade away.

A fixture of the Cultural District since 2005, Sonoma Grille took a different path: deliberate self-reinvention. Last year, chef-owner Yves Carreau refreshed Sonoma’s menu and its practice of California food-wine pairings. He stayed true to the Northern Californian concept but updated it with trendy ingredients and a looser approach to wine.

Then, abruptly, Carreau shut Sonoma Grill down this spring. Swiftly revamped, it has now re-opened as a French restaurant, Le Lyonnais, named after and inspired by Carreau’s hometown of Lyon.

Le Lyonnais (pro tip for non-French speakers: the “s” is silent) maintains Sonoma Grille’s original decor, which is designed to make dining in the near-cavernous interior feel like relaxing in the courtyard of a Napa Valley winery. Even the mural of California vineyards remains; the resemblance to southern France must be close enough.

As for the new menu, Carreau describes the concept as “French comfort food,” acknowledging that that may not be the typical American expectation of French cookery. Certainly, Le Lyonnais’ offerings are far from the haute cuisine of Escoffier, but it’s been decades since that style defined French food in America. We found Le Lyonnais to be very French indeed: not too fussy, but unafraid of rich flavors and ingredients, all expertly combined and meticulously prepared. Many of the recipes are ones Carreau himself grew up eating, and are said to have been in his family for generations.

Our meal began, deliciously, with a board of warm baguette from the magnificent Five Points Artisan Bake Shop (quite a feather in its cap to be the chosen baguette supplier of a French-run kitchen), served with an exquisite house-made herbed honey butter. Sweet, salty, creamy and freshly flavored with herbs without tasting like grass, this butter slathered on baguette might have been peasant fare, but it tasted fit for a king.

From there, we ordered two items from the menu’s array of categories we would characterize as “smaller than entrees”: Amuse-Gueules, Salades, Soupes and Tartines.

Heirloom tomato salad was splendid, as only a summer tomato salad can be. Chunks of a variety of tomatoes of different colors and acidities were arrayed on the plate around an egg-shaped ball of fluffy, creamy burrata cheese. These were sprinkled with watercress and oil-cured olives, and drizzled with a chaste amount of rich avocado mousse and smoked tomato vinaigrette. The flavors were naturally intense, perfectly complementary and beautifully balanced.

Tartine Bourguignonne was just as gorgeously presented — two toasts topped with caramelized onions and tender braised beef, dolloped with housemade Boursin. The texture of the meat was exquisite, but its flavor was surprisingly under-seasoned, a flaw made more apparent in bites where the sweet onions took the upper hand, exposing the meat’s lack of savor. The rich gravy was a necessary crutch to this beef hitting its stride.

The entreé list is brief but varied, ranging from the familiar — steak frites — to the novel, such as quenelle Lyonnaise. In this dumpling-esque dish, white fish — in this case, striped bass — was combined with enriched breadcrumbs to form a sort of mousse cake, which was in turn poached and served with a luxurious lobster cream sauce. Unlike a meaty fish filet or the tooth-and-claw combat of eating a whole lobster, this was a deceptively delicate dish. Mild, yet rich, it was ultimately quite satisfying.

At its most basic, pithivier is a savory tart wrapped with puff pastry. But lamb pithivier was far from basic. In addition to a round of airy, crisp pastry, Le Lyonnais’ version also included thick celeriac purée and hay-roasted beets, as well as a rich, glossy sauce. The lamb was fork-tender and pleasingly gamy, though again a bit under-seasoned. Indeed, the meat wasn’t quite savory enough to balance the sweet beets, so that Jason ended up with a small pile of them left over.

Seasoning can always be adjusted; authenticity cannot. After 12 years of California cuisine, we’re thrilled to see Yves Carreau turning his talents toward his own roots in the culinarily rich city of Lyon.