Freeland is an understated tour through the trials of pot farming 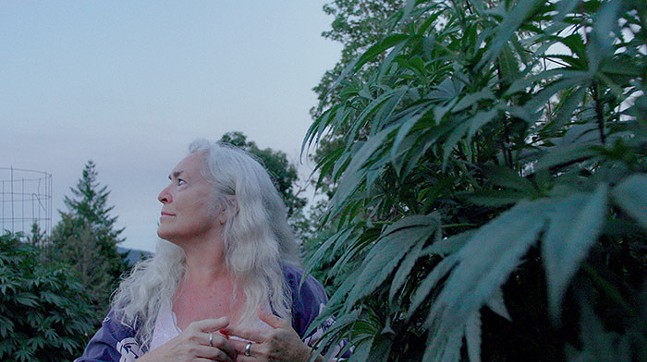 Photo: Dark Star Pictures
Freeland
It feels as though there’s been a noticeable shift in movies since the pandemic, particularly towards characters who have retreated from society. From a woman giving it all up in Nomadland to a hermit-like chef in Pig, to Bo Burnham being confined to a single room in Inside, we’re seeing more and more stories of people who exist a bit outside the grid.

We can now add Kate McLean and Mario Furloni’s Freeland to that list. Now playing at Row House Cinema, the film stars Krisha Fairchild as Devi, a longtime California pot farmer suddenly faced with the very real threat legalization poses to her business. A farmer on a stunning piece of land who’s spent her whole life as an outlaw, she has zero interest in giving herself over to a rapidly commercializing business, even as the walls of her idyllic lifestyle are starting to close in around her.

The film is a damning condemnation of where the legal weed industry is headed. Over and over, it asks its audience, “Is this what we really want?” Yes, more and more patients are getting access to the medicine they deserve, but it's coming at the cost of the people who were there before, and at the cost of the plant's holistic nature, slowly being corrupted by venture capitalists and startups. In a telling scene towards the end of the film, Devi tries to be the bigger person and looks for a distributor at a Cannabis Convention. Instead, she’s met with tech bros, equipment unsuited for growing, and a looming banner reading “Cannabis Meets Capital”.

Unfortunately, some of the film's themes and ideas come off as undercooked, with some issues not being addressed at all. It is a shame that a film that cares so heavily about its subject doesn’t give much of a platform to the overwhelming disparities in the battle over legal weed, including the glaring number of Black people still being incarcerated for selling it even as it becomes legal.

The film’s deliberate pace and the directors’ near-documentary shooting style works as both a blessing and a curse. It's naturalistic, often beautiful, and compels with its tranquility. But it also underserves some of its subplots, with the relationship between Devi and her employee Josh (Frank Mosley) in particular needing more exploration. The appeal of Freeland’s restraint is apparent, but there are times you just wish that observant camera probed a little bit more.

However, it’s pretty easy to overcome these flaws when you have a central performance as good as Fairchild’s. The type of work that, if it had more eyeballs, would be considered for any and every award, she is masterful as Devi, essentially in every scene in the film. She’s fierce yet motherly, stubborn but immensely giving, a hippie with the pent-up sadness of knowing that the world just doesn’t see the things the way she does anymore. Fairchild is asked to do a lot here, and there isn’t a single false note.

The topics in Freeland aren’t going to be slowing down anytime soon, as more and more states see the big green dollar sign flashing over every new dispensary that opens up. There are no easy answers, and the film doesn’t really provide them. Instead, what it does provide is a look at what the industry is slowly chipping away at, real humans, deeply felt, who still truly believe in the product they’re growing.