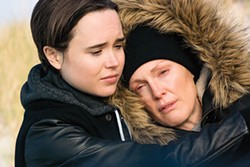 Peter Sollett’s drama Freeheld takes viewers back to the early 2000s, when equal rights for gay partners was still a messy patchwork of local regulations. So it was for Ocean County, N.J. police detective Laurel Hester (Julianne Moore), who, after being diagnosed with terminal cancer, fights to have her pension transferred to her domestic partner, Stacie Andree (Ellen Page).

It’s an emotional and inspirational real-life story that, despite some good actors, fails to coalesce into an affecting film. Freeheld is a checklist of standard melodrama that dutifully builds to its feel-good conclusion: The romance is established; a weird pain leads to diagnosis; the pension is denied; assorted players gradually rally to the cause; and so on.

Moore, of course, ails exquisitely, but she and Page never find a believable chemistry. (The TV-movie-caliber dialogue can’t be helping.) Moore fares better with her long-time cop partner (Michael Shannon), who also makes the best of his character’s transformation from being uncomfortable with Hester’s sexuality to her most supportive ally.

And then there is Steve Carell, who plays a braying, snarky legal activist who takes on Hester’s cause. His performance recalls Carell’s other comically exaggerated characters, and it’s a casting misstep. The screening audience howled at his every line, creating a weird tonal dissonance with the film’s fighting-from-the deathbed vibe.