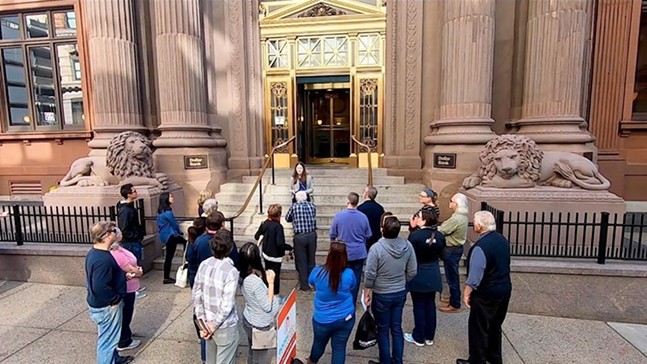 Photo: DOORS OPEN Pittsburgh
DOORS OPEN tour group outside of Dollar Bank in Downtown Pittsburgh.
On the surface, Chatham Hall is just one property in the picturesque Chatham Village on Mt. Washington. But as the Freedom Seekers: Underground Railroad Tour will reveal, the house was one of a few local stops that welcomed escaping African-American slaves heading North in the years leading up to the Civil War.

Tickets just went on sale for the tour presented by DOORS OPEN Pittsburgh, a
non-profit dedicated to celebrating the city’s heritage, architecture, and communities. Set for Sat., Feb. 29, the special Black History Month event will take attendees to major rumored spaces illustrating Pittsburgh’s role in the Underground Railroad, the term used to describe a clandestine network of safe houses, tunnels, and trails.

“Even though slavery had ended, this system had to be put into place because not everyone in the north or south agreed with the abolition of slavery,” says Bonnie Baxter, founder and executive director of DOORS OPEN Pittsburgh. “On this tour, we are going to not only provide access to some of these presumed safe houses and tunnels but also tell the story of all ‘freedom seekers’ – freed slaves and the white sympathizers.”

While DOORS OPEN Pittsburgh usual hosts one event a year in October, Freedom Seekers is part of a new initiative for 2020 to expand its offerings to monthly Specialty Tours. The tours will be guided, either by bus or walking (Freedom Seekers is by bus and includes docents), and are meant to provide "a thematic tour experience" in various neighborhoods and buildings.

Among the stops is Chatham Hall, once known as the Bigham House, the family home of Thomas J. Bigham, an abolitionist and a member of the Western Pennsylvania Anti-Slavery Society. According to a press release, it’s believed that Bigham designated his home as a station in the Underground Railroad. Also included is the Morning Glory Inn in the South Side and Market Square, home of Pittsburgh’s former Diamond Market, where sites like the current Original Oyster House and others served as a “hub for abolitionist and Underground Railroad activity.”

The tour will also hit the Dollar Bank headquarters Downtown, where, between 1855 and the 1920s, thousands of members of Pittsburgh's early African-American community opened savings accounts. (It should be noted that Dollar Bank also sponsored the tour.) At Dollar Bank, handwritten ledgers containing signatures of African-American account holders and employees of the Monongahela House, an important site in Downtown Pittsburgh during the Underground Railroad era, will be on display.

Baxter sees the tour as fulfilling the mission of DOORS OPEN Pittsburgh by using physical buildings to highlight lesser-known, but essential parts of Pittsburgh’s past.

“As a non-profit, DOORS OPEN Pittsburgh is all about teaching our visitors something about Pittsburgh by providing them unique access inside cool buildings that help tell the story,” says Baxter.