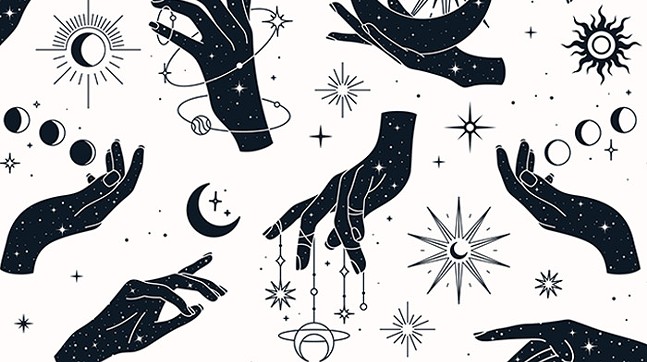 ARIES (March 21-April 19):
In 1904, it wasn't illegal to use performance-enhancing drugs during Olympic competitions. Runner Thomas Hicks took advantage of this in the marathon race. The poison strychnine, which in small doses serves as a stimulant, was one of his boosters. Another was brandy. By the time he approached the finish line, he was hallucinating and stumbling. His trainers carried him the rest of the way, and he was declared the winner. I recommend you make him your inspirational role model in the coming weeks. How might you cheat to gain a great victory? APRIL FOOL! I Lied. While it's true that a meaningful triumph is within your reach, you're most likely to achieve it by acting with total integrity, following the rules, and imbibing no stimulating poisons.

TAURUS (April 20-May 20):
Science fiction aficionado Wil Wheaton suggests that all of us should have the following: 1. a nemesis; 2. an evil twin; 3. a secret headquarters; 4. an escape hatch; 5. a partner in crime; 6. a secret identity. Dear Taurus, I have doubts that you possess any of these necessities. Please embark on intensive efforts to acquire all of them. Your deadline is April 21. APRIL FOOL! I half-lied. There's no way you could add all those things to your repertoire in such a short time. See if you can at least get a secret identity and a partner in crime. It’s time to have wicked fun as you add to your potency and effectiveness.

GEMINI (May 21-June 20):
"I hate being on my best behavior," wrote Gemini author Colleen McCullough. "It brings out the absolute worst in me." In the coming weeks, I hope you avoid the danger she describes. Don't be on your best behavior! Emulate Gemini filmmaker Clint Eastwood, who said, "I tried being reasonable, but I didn't like it." APRIL FOOL! I lied. Here's the real truth: Being kind and generous and reasonable will be your secret weapon in the next three weeks. Doing so will empower you to make interesting and unforeseen progress.

CANCER (June 21-July 22):
A Tumblr blogger named Alyssa complains, "I'm still peeved that I can't fly or set things on fire with my mind." You might share that feeling, Cancerian. But here's the good news: I predict that you could soon acquire, at least temporarily, the power to fly and set things on fire with your mind. Use these talents wisely, please! APRIL FOOL! I lied. In fact, you probably won't be able to fly or set things on fire with your mind anytime soon. However, you may acquire other superpowers that are only slightly less fantastic. For example, you could change the mind of an ally who has been ridiculously stubborn. You could uncover a big secret that has been hidden. You could mend a wound you thought would never heal. Any other superpowers you need right now?

VIRGO (Aug. 23-Sept. 22):
In honor of your arrival in the most lyrical and soulful phase of your cycle, I offer you advice from poet Richard Jackson: "The secret is to paint your own numbers on the clock, to brush away those webs that cover the wild country of the soul, to let your star hover between the flowers of the moon and the flowers of the sun, like words you have never spoken yet always hear." APRIL FOOL! I partially lied. I don't think you should paint your own numbers on the clock. But the rest of what Jackson said is totally applicable and useful for you.

LIBRA (Sept. 23-Oct. 22):
"I want excitement," declared Libra novelist F. Scott Fitzgerald, "and I don't care what form it takes or what I pay for it, so long as it makes my heart beat." In the coming weeks, I hope you will make that statement your motto. APRIL FOOL! I half-lied. While I do foresee you being able to gather a wealth of excitement, I hope you won't be as extreme as Fitzgerald in your pursuit of it. There will be plenty of opportunities for excitement that won't require you to risk loss or pay an unwelcome price.

SAGITTARIUS (Nov. 22-Dec. 21):
In the traditional opera performed in China's Sichuan province, magical effects were popular. One trick involved characters making rapid changes of their masks. The art was to remove an existing mask and don a new one with such speed that the audience could not detect it. An old master, Peng Denghuai, once wore 14 different masks in 24 seconds. This is an antic I think you should imitate in the coming days. The more frequently you alter your persona and appearance, the more successful and popular you'll be. APRIL FOOL! I half-lied. I recommend that you gleefully experiment with your image and exuberantly vary your self-presentation. But don't overdo it.

CAPRICORN (Dec. 22-Jan. 19):
A nutritionist named Mark Haub decided to try losing weight by eating only sugary treats. For 10 weeks, he snacked on junk food cakes, cookies, and sweet cereals. By the end, he had lost 27 pounds. In accordance with astrological omens, I suggest you try the metaphorical equivalents of this project. For instance, work on deepening your relationships by engaging your allies in shallow conversations about trivial subjects. Or see if you can enhance your physical fitness by confining your exercise to crossing and uncrossing your legs as you sit on the couch watching TV. APRIL FOOL! I lied. Here's your real horoscope: For the next four weeks, take better care of your body and your relationships than you ever have before in your life. Make it a point to educate yourself about what that would entail, and be devoted in providing the most profound nurturing you can imagine.

AQUARIUS (Jan. 20-Feb. 18):
Aquarius-born Giordano Bruno (1548–1600) was bravely heretical in his work as a philosopher, poet, mathematician, and friar. He angered the Catholic Church with his unorthodox views about Jesus and Mary, as well as his belief in reincarnation, his practice of occult magic, and his views that there are other stars besides our sun. Eventually, the authorities burned him at the stake for his transgressive ideas. Beware of a similar outcome for expressing your unusual qualities! APRIL FOOL! Luckily, no punishment will result if you express the rich fullness of your idiosyncrasies in the coming weeks. I'm happy about that, since I'm encouraging you to be as eccentrically yourself as you want to be.

PISCES (Feb. 19-March 20):
Life is too complicated to accurately comprehend. There's too much to know! It's impossible to make truly savvy and rational decisions. Maybe the best strategy is to flip a coin or throw the dice or draw a Tarot card before doing anything. APRIL FOOL! While it's a fact that life is too complex for our conscious minds to fully master, we have massive resources available on subconscious and superconscious levels: our deep soul and our higher self. Now is an excellent time to enhance your access to these mother lodes of intelligence.