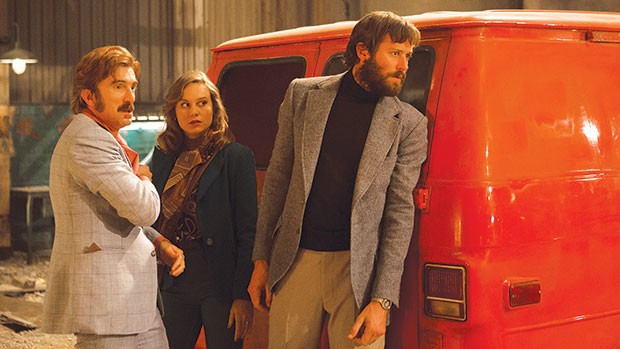 One night in 1978, at an abandoned warehouse in an isolated part of Boston. Two gangs meet to complete a standard business deal — a suitcase of cash for a van full of guns. What could possibly go wrong? Seasoned viewers of crime thrillers know the answer is: Everything. Spectacularly.

In this iteration, directed and co-written by Ben Wheatley (High-Rise, Kill List), the squabbling starts in the first moment, and escalates quickly. From the greasy dudes there for muscle and the local deal-makers (Armie Hammer, Brie Larson) to some international parties, including two Irishmen (Cillian Murphy, Michael Smiley), it’s a group of folks given to paranoia, profanity and hair-trigger responses.

Larson mostly holds her own in this room full of scenery-chewers, though her character lacks much color for her to play with. Unlike Sharlto Copley, who steals the show as arms-merchant Vernon, a preening South African (or “Austrian,” per some of the dumber folks on site), who drops his catch phrase “Live and Vern,” to little effect.

Unsurprisingly, this one-room action movie is a non-stop parade of insults, snappy comebacks, and lots and lots of shooting. It’s actually more fun when the bullets run out, and weapons must be scavenged from the assorted debris. (Free Fire certainly nods to Tarantino, including one snarkily used soft-rock song.) It’s a tidy 90 minutes, and perfect if you need nothing more than a silly non-stop shoot-out.