Free at Last? tells how slavery in Pennsylvania ended: slowly.

Free at Last?, a University of Pittsburgh exhibition at the Heinz History Center, is full of information about slavery in Pittsburgh. Maybe too full: This rather text-heavy exhibit about a complicated subject risks frustrating museum-goers, particularly those used to more image- and artifact-oriented displays.

But Free at Last? makes two important points emphatically: African Americans, both free and enslaved, played key roles in gaining slaves' freedom here; and, as the titular question mark suggests, the road to legal freedom was a long and crooked one, full of detours, switchbacks and dead ends.

The exhibit began with the discovery, in 2007, that the Allegheny County Recorder of Deeds housed a multitude of documents about slavery, indentured servitude and the granting of freedom. Robert Hill, a Pitt official, worked to build a show around them, with curatorial director Madelyn Ross and history professor Laurence A. Glasco.

It might shock some that Pennsylvania ever allowed slavery at all. But that lionized Quaker and founder of the commonwealth, William Penn, bought and sold slaves. Just months after Gen. Forbes signed the letter naming this slice of turf "Pittsburgh," in 1758, British Commandant Hugh Mercer wrote a letter seeking "two Negro girls and a boy about fourteen years old, to be paid for in fur." Other slaveholders included prominent Pittsburghers with well-memorialized surnames like Neville and Craig, and founding trustees of the school that became Pitt itself.

In 1780 -- when there were 6,000 slaves in Pennsylvania, several hundred of them in these parts -- legislators passed the Pennsylvania Act for the Gradual Abolition of Slavery. But it didn't actually free anyone, and it left slaves' children who were born afterward indentured servants until age 28. Meanwhile, the "slave-catchers" who were active here into the 1840s menaced not only actual runaways -- neighboring Virginia (now West Virginia) remained a full-fledged slave state -- but free blacks, too.

The counternarrative of African-American resistance centers on a small, still little-known class of affluent, educated blacks in antebellum Pittsburgh, to whom Free At Last? gives their due.

John Vashon, a veteran of the War of 1812 who owned a bathhouse here, founded the city's first antislavery society (in 1833). John C. Peck, a preacher, owned Peck's Oyster House. Along with wealthy merchants, activists like newspaperman Martin Delany, and white abolitionists, they made Pittsburgh a stop on the Underground Railroad -- a place where black hotel waitstaff might function as a legally traveling slave's ticket to illegal freedom.

In the initial sections of the exhibit, the aisles are narrow, and the wall text closely posted. But halfway through, the layout symbolically opens up into a full room, where life-sized mannequins help tell of how some slaves effected their own escapes. Some went in disguise; one man mailed himself from Virginia to Philadelphia in a wooden crate.

Equally fascinating, if less inspiring, is the exhibit's account of just how "gradual"
abolition proved here, and how entrenched was everyday prejudice. The banality of that evil is illustrated by reproductions of newspaper notices that, despite growing anti-slavery sentiment, ran in the Pittsburgh Gazette into the 1820s: Runaway slaves meant ad revenue. Meanwhile, state legislators failed in efforts to defy federal fugitive-slave laws -- as a new state constitution, enacted in 1837, repealed the vote for free African Americans, and blacks were excluded from the city's newly minted public schools.

While slavery is no longer legal, it still exists today, of course -- in fields, mines, factories, brothels and military camps around the world. That's something it wouldn't have hurt this exhibit to mention. And given some patrons' tendency to cluster in an alcove screening Unchained Memories, a 2002 HBO special dramatizing slave narratives, it would have helped to spread video or interactive displays throughout.

Still, Free at Last? and its substantial take-home booklet do the job. The show's single best stroke visually is a series of six tall, double-sided panels, each 6 feet wide and encasing some of the actual two-century-old freedom papers, indentures and other documents from the county Recorder's office. These hammer home the scope of human bondage here. They also illustrate the bizarre legal contortions one society, not so distant from ours, required of itself to cease classifying people as property. 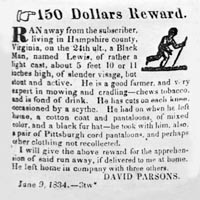 "If delivered to me at home": This ad offering a reward for a runaway slave ran in an 1834 edition of the Pittsburgh Gazette newspaper.