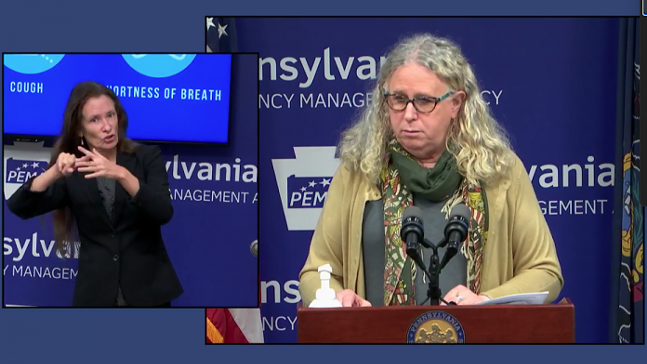 The agency confirmed 12 new deaths on Sunday, and seven deaths on Monday, for a total of 8,673 confirmed deaths statewide.

Daily Cases: In a statement, the Health Department said daily increases in caseloads are “now comparable with what we saw in April,” the department said in a statement.” Speaking to journalists on Monday, Levine said that, over the last week, health officials had reported three days with more than 2,200 cases. The state reported 2,043 new cases on Saturday, the Philadelphia Inquirer reported. The state is now averaging 1,668 new cases a day over the last seven days, which is just short of the high of 1,685 new daily cases that was set in April, the Inquirer reported. There are currently 1,104 people hospitalized and Levine said she expects that number to rise.

Levine also pushed back hard against White House Chief of Staff Mark Meadows who told CNN on Sunday that “we are not going to control the pandemic.”

“Despite the reporting you’ve seen we can control COVID-19. We need to use all the public health strategies in our toolbox — starting with containment, and moving to targeted mitigation, and therapeutics and vaccines,” Levine said. “We are committed to taking all steps to protect public health. What this pandemic has certainly shown is that we are all interconnected and need to work collectively and stand united.”

Schools: Over the last two weeks, the state has reported nearly 2,200 cases among children aged 5-18, Levine told journalists. The percentage of cases among 13- to 18-year-olds is “higher than it was at the start of the pandemic,” she said.

The Holidays: With Thanksgiving and Christmas just weeks away, Levine reiterated that those holidays will look very different this year.

“Unfortunately, in this time of the global pandemic of COVID-19, as we approach the holidays, we need to rethink those gatherings,” she said. That approach should include foregoing large and small family gatherings and “only staying with the family that you live with, that you’re exposed to all the time,” or by organizing Zoom holiday gatherings

Doing so will be difficult, Levine acknowledged, “but that means people don’t get sick in your community, and that will be worth it.”

What Happens Next: With Pennsylvania in the midst of a fall surge, Levine repeated advice that she and Gov. Tom Wolf offered last week: Wash your hands, wear a mask, and practice social distancing. A visibly angry Levine said Pennsylvanians have a “collective responsibility” to do so.

“We cannot rely on any strategy that relies on ‘herd immunity.’ That means letting it burn, and that is not a good public health strategy. It really comes down to personal responsibility. We have a collective responsibility to work to the common good.

John Micek is the editor of the Pennsylvania Capital-Star, where this story first appeared.