After three successful seasons, 2016 will be crucial one for the Buccos 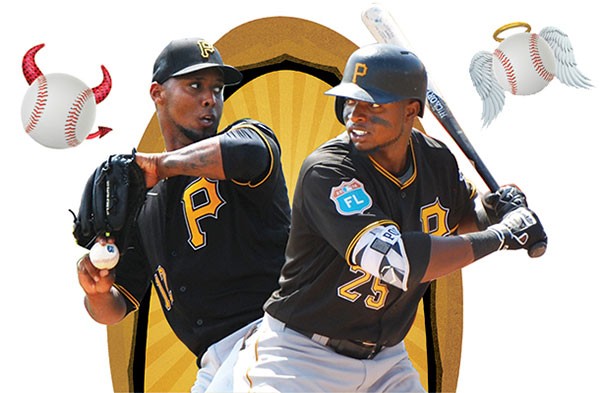 If you look closely at the Pittsburgh Pirates’ pending 2016 season, you can almost see a little devil and a little angel hovering it. It’s one of those seasons that feels pivotal for some reason.

The Buccos and their fans deserve that kind of success after 20 of the most miserable seasons suffered by any professional franchise. The Pirates lost every year. Fans had to pretend that horrible bush-league players like Lastings Milledge, Derek Bell and Pat Meares were going to be “just the thing to right the ship.” We had a player suspended for whacking Milwaukee’s sausage mascot with a goddamned baseball bat, for crying out loud. It was literally the only way we were getting on SportsCenter in those days. Those were the sweltering dark days. It was hell, or at least pretty hellish.

But this year feels uncertain. It feels like it could go either way. Many “experts” have the Pirates finishing third in the NL Central behind St. Louis and Chicago. The Buccos’ Midwest rivals are stacked, there’s no doubt about it. But did anyone really see the Pirates’ success of the past three seasons coming? That’s why this feels like a year that anything could happen for any number of reasons. We’ve narrowed it down to eight: four reasons the Pirates are headed for salvation in 2016 and four reasons they’re destined for damnation.

Gerrit Cole and Francisco Liriano are good — really good. Cole won 19 games last year with a 2.60 ERA and Liriano won 12 with a 3.38 ERA. These two will once again anchor the Pirates’ rotation. The Pirates also salvaged former Rockies pitcher Juan Nicasio from the free-agent pool to be the team’s long reliever. But a funny thing happened on the way to the bullpen: Nicasio is killing it. Nicasio has pitched 15 innings over five spring-training games this year and has struck out 24, including 10 strikeouts in four innings on March 16 against the Orioles. He hasn’t allowed even a single run this spring. City Paper asked Pirates starter Jeff Locke if he worried about Nicasio taking his spot. “The way he’s pitching right now, I think the question is, ‘Whose spot couldn’t he take?’” Locke says. Add to that the anticipated mid- to late-season arrival of touted minor-league lefties Tyler Glasnow and Jameson Taillon and the Pirates should be in good shape for the stretch run. In the bullpen, no team in baseball last year had a better eighth-/ninth-inning combination than set-up man Tony Watson and closer Mark Melancon. Watson had 41 holds last season and Melancon clocked in 51 saves. If you can lock down the eighth and ninth innings, you’re going to be able to lock down more wins.

Once you get past Cole and Liriano, there are a lot of question marks. Nicasio has been great this spring, but it’s the spring. The 29-year-old has never had a winning record and never won more than nine games in a season as a starter. He’s also never had an ERA as a starter lower than 4.00; in fact he’s had only one season lower than 5.00. Whether he can sustain this success for a full campaign is an unknown. The other starters, as of press time, are former New York Mets starter Jon Niese (inconsistent), Locke (really inconsistent) and returning Pirates pitcher Ryan Vogelsong (38 and inconsistent). The Pirates did little in the offseason to make themselves better on the hill (unless the Nicasio lottery ticket pays off). They lost A.J. Burnett to retirement and J.A. Happ to the Blue Jays. The whole staff — with the exception of Cole, Liriano, Watson and Melancon — has a bit of a close-your-eyes-and-cross-your-fingers vibe to it.

I know there are teams that might take exception, but you’d have a hard time convincing me that the Pirates don’t have the best outfield in baseball. Andrew McCutchen, Starling Marte and Gregory Polanco are the perfect trio. McCutchen is still at the top of his game; Marte came into his own last year; and Polanco, while young, has been improving every season. Infielders Jung Ho Kang, Jordy Mercer and Josh Harrison are the team’s new 5-4-3 combo. Kang became a solid infielder as his first season in the majors progressed in 2015. Harrison brings big-play capabilities, and Mercer, while not the most exciting player on the field, is a pretty dependable shortstop who should be improved over last year. And if you want a tough guy to bring them together, they don’t get much tougher than Francisco Cervelli. As a catcher, Cervelli is as passionate on the field as he is talented; he frames pitches nicely and knows how to work a pitching staff.

Errors, errors, errors. The Pirates have led the National League in errors the past two seasons and ranked third and second, respectively, in all of baseball. The biggest offender, Pedro Alvarez, is gone, but there are still plenty to go around. Last year, Harrison and Kang had 14 each, Polanco had eight and Mercer had seven. These are the types of mistakes that prevent you from winning the division and moving deeper into the postseason. And while Jon Jaso has had a pretty decent spring at first base, he’s probably not the long-term answer — that’s minor-leaguer Josh Bell, and we might see him later in the year. For Jaso’s part, although he’s aware of the Pirates’ past problems at the position, he says he’s been working hard and is not feeling any added pressure. “I don’t compare myself to other players at this position,” Jaso says. “I can only do the best that I can do, and that involves preparing myself the best I can prepare myself. If I do that and mistakes happen, they happen. They happen to everybody. The difference is, I’ll beat myself if they happened because I didn’t have the proper preparation. But if I have the preparation behind it, that’s the way it goes; it’s human error, you just have to move on from it.” 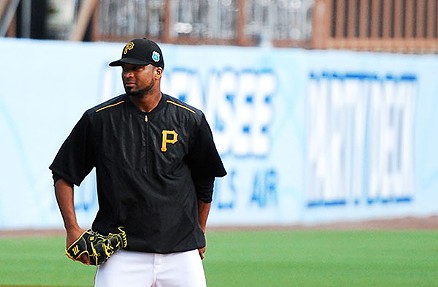 Cubs first, Cardinals second? Cardinals first, Cubs second? If you ask the plethora of baseball experts out there, that’s the only question in the NL Central this season. But why would you go to sleep on the Pirates now? The Cubs took a huge step forward last year and beat the Pirates in the wild-card game. But it’s a team with a lot of young guys — extremely talented young guys, but young nonetheless. And the Cardinals, they’re always good. But they lost guys like Jason Heyward and John Lackey to the Cubs. The Cardinals are aging; that’s why Heyward left, he smelled the decline. The Cubs are where the Pirates were in 2013 — a young team that caught fire and turned in a magical season. The Pirates have a perfect mix of veteran players like Liriano, McCutchen and Cervelli and great young players like Cole, Polanco and Kang. Where does that leave the Pirates? Most likely in the driver’s seat.

Have you seen the Cubs’ lineup? They had nine players hit home runs in double digits (the Pirates had five) and that was before they added Heyward. Add pitchers Jon Lester, John Lackey and Jake Arrietta, and the Pirates are in for a rough slog. And the Cardinals? Still not worried about them; they finish a distant third. 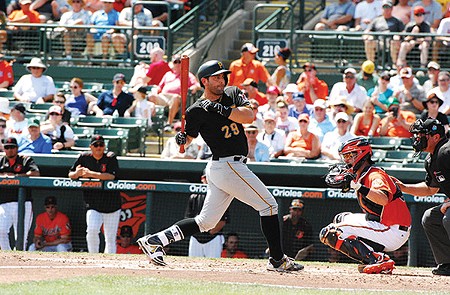 Andrew McCutchen is back in a big way. On March 16 and 17, he hit two home runs that landed approximately 20 miles south of Atlanta. Sure it was just spring training and even Cutch admits that the park “plays small,” but still. McCutchen was hampered last spring with chronic knee pain and never really felt like himself all season. That’s not the case this year. “My knee’s fine; it’s really strong,” McCutchen said the day after the first blast and just a few hours before the second. “Physically, I’m in great shape. Last year, my issues were health-related. I couldn’t do what I wanted to do or prepare the way I wanted to prepare. I had some adversity last year, but that’s last year. I’m ready to go.” Add the breakout season that Marte had in 2015, continued growth at the plate from Kang and Polanco, and clutch hitting from Cervelli, and the Pirates have the potential to put up a lot of runs.

Between the loss of Pedro Alvarez and Neil Walker (who was traded to the Mets), the Pirates lost a total of 43 home runs, 147 RBI and 130 runs from last year’s lineup. But that happens; it’s baseball. Except normally when you lose two run-producers, you go out and get new run-producers and the Pirates didn’t do that. With the exception of Josh Harrison, who is now the everyday second baseman, the only new face in the Pirates’ starting lineup is Jaso. He’s only hit 37 homers in his entire seven-year career. Jaso will contribute in other ways, but what the Pirates really need is more consistent power to replace what they lost and they failed miserably in that regard.