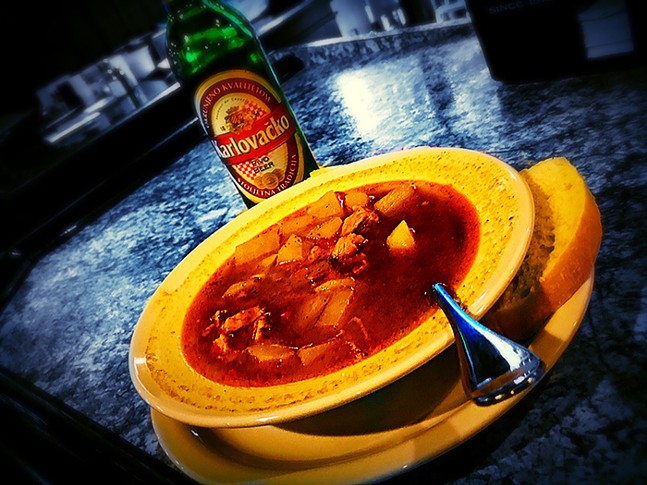 Photo: Courtesy of Huszar
Huszar’s goulash (aka gulyás)
There is no better winter food than a good stew. Hearty, rich, thick, hot, and flavorful. No need to expose your frigid hands for too long cutting meat or holding a sandwich. Broth, meats, vegetables all combined in perfect harmony. That’s winter cuisine, and Pittsburgh has some great options thanks to the fare of Hungary, Mexico, Ireland, and the Carribean.

627 E. North Ave., North Side. huszarpittsburgh.com
Goulash is a beef stew that is hard to hate (if you eat meat, of course), and Huszar’s Hungarian version, aka gulyás, will cure any winter blues. Succulent meat, rich potatoes, and tomatoes, in a broth bursting with spices like paprika and other eastern European favorites. Huszar’s dishes are some of the most authentic in Pittsburgh, as the owners are second-generation Hungarian. In addition to goulash, try the creamed onion soup (Hagymakrémleves) or the stewed beef and gravy over dumplings.

660 Washington Road, Mt. Lebanon. totopomex.com
An unappreciated classic Mexican dish is a rich bowl of pozole. This traditional stew is typically made with hominy and meat, and is thick and powerful, but surprisingly balanced. Totopo makes a Pozole Verde with shredded chicken and tomatillos that is a bright treat on a cold day. Or, if you’re looking for other authentic Mexican flavors, try their creamy poblano soup, which is a delicate combination of mushrooms, corn, bell peppers, and black beans in a creamy broth flavored with mild poblano peppers.

2329 Penn Ave., Strip District. harpandfiddle.com
If you are a beer drinker, you probably think a Guinness stout is a perfect winter beer. Heck, it's great in a stew. The Irish — who endure cold, cloudy, balmy weather just about all year round — make killer stews. At Mullaney's Harp & Fiddle, the Guinness lamb stew is just the ticket for a gloomy Ireland-like day. The bitterness of the beer helps to cut through the richness of the chunks of lamb, red potatoes, parsnips, turnips, and carrots. Slow cooked to perfection.

823 E. Warrington Ave., Allentown. leonscaribbeanrestaurant.com
The magical thing about stew is it usually takes ingredients seen as cast-offs and makes them shine. At Leon’s Carribean Restaurant, that ingredient is Oxtail (aka the meat from the tail of cattle). Oxtail needs to be slow-cooked or it is too tough and impossible to remove from the bone. Leon’s stews it to perfection with Jamaican spices in a dark broth. Served with steamed cabbage and rice and peas, or white rice.

Where to get Pittsburgh-made sweatpants, socks, and other comfortable quarantine essentials

Five Pittsburgh cocktails that are great even when served cold, when it’s cold outside 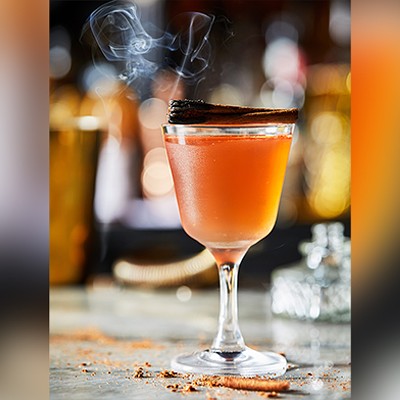 Seven places to sled within the city of Pittsburgh

Five Pittsburgh movie theaters you can rent this winter