Catch Birdboy: The Forgotten Children, The Breadwinner, Mary and the Witch’s Flower and Coco

This week at Row House Cinema, it’s a slate of recent animated feature films, three of them Pittsburgh premieres.

BIRDBOY: THE FORGOTTEN CHILDREN. This Spanish film from Pedro Rivero and Alberto Vázquez should delight those who like their tales dark. The story takes place in a dystopic realm of anthropomorphic animals. Some scavenge for copper in the wasteland, others kill the pain with drugs. But a teenage mouse named Dinky rouses three friends, and they set off to escape their sad homes. Caught in their scheme is Birdboy, a tragic lost soul whom Dinky loves. The images, however grim, are gorgeously rendered, and there is a scintilla of hope to this bleak tale. In Spanish, with subtitles. Jan. 19-21, Jan. 22 and Jan. 24

THE BREADWINNER. From director Nora Twomey (who co-directed The Secret of the Kells) comes this tale of perseverance set in the Taliban-controlled city of Kabul, Afghanistan. After her father is wrongfully imprisoned, 11-year-old Parvana must disguise herself as a boy in order to leave the house, earn money doing odd jobs and provide food. These excursions are exhilarating for their freedom, but also fraught with danger. Parvana’s story is intercut with a mythical tale she tells her family of another plucky adventurer, making his way through a fantastical landscape. 7 p.m. Wed., Jan. 17 (sneak preview), and Jan. 19-25 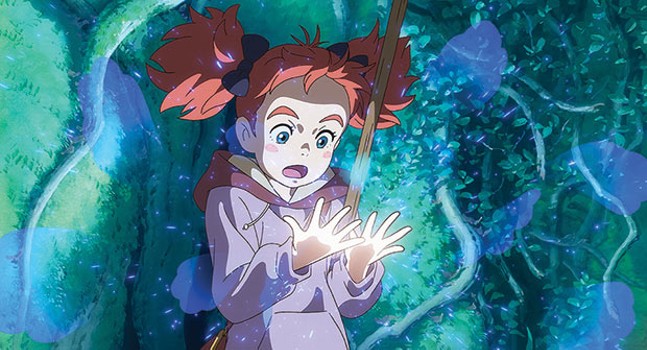 Mary and the Witch’s Flower

MARY AND THE WITCH’S FLOWER. Adapted from Mary Stewart’s classic children’s book The Little Broomstick, this Japanese anime from Hiromasa Yonebayashi takes viewers through young Mary’s crazy adventures after she picks some magical flowers. Soon she is transported by broom to a witch college in the sky, but her amazement soon turns to concern after discovering a nefarious plot. Yonebayashi is a veteran of Studio Ghibli, and the film reflects that style and vibe. Dubbed and subtitled; see www.rowhousecinema.com. Jan. 19-25

COCO. Rounding out the program is this recent critically acclaimed feature from Pixar, directed by Lee Unkrich and Adrian Molina. In it, a Mexican boy travels to the Land of the Dead to find his great-great-grandfather, a legendary singer.  It’s a fun story, emphasizing family and heritage, and the digital animation is superb. Jan. 19-25

Candyman is a tale of two different movies