“I am vehemently opposed to this project.”

The city’s Urban Redevelopment Authority may be getting a bit ahead of itself.

In July, the URA applied for a state grant that would help fund a transit connector from Oakland to potential labs and tech centers at the Almono development site in Hazelwood and beyond. The project, which potentially could use driverless vehicles to shuttle riders, aims to foster “continued economic growth” between the two areas, according to the grant application.

The problem is, however, that the URA forgot to ask the two small neighborhoods the shuttles would travel through if they minded. At a Dec. 7 community meeting in the Four Mile Run section of Greenfield, however, one thing became clear: They mind very much.

“I am vehemently opposed to this project,” says Tom D’Andrea, a lifelong Four Mile Run resident whose home is right on the proposed transit loop. “If I saw all the things our neighborhood needs directly impacted, it might be different, but I don’t see how that is possible.” 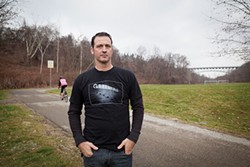 Photo by Heather Mull
Four Mile Run resident Tom D’Andrea stands near the southern entrance of the Junction Hollow Trail, where the proposed shuttles will run through.

D’Andrea says residents aren’t very interested in a shuttle bus and would rather see some of the community benefits they have been requesting. He says neighborhood roads have not been paved in decades, blighted properties have not been addressed, and no action has been taken to mitigate problems with stormwater runoff. (In 2009, the neighborhood experienced a devastating flood.)

Pittsburgh City Councilor Corey O’Connor says the process to include community input has just begun. He says consultants have been hired to go door-to-door to the residents of all affected neighborhoods, including Hazelwood and Oakland. However, O’Connor says his office found out about the pre-community-input grant application from an article in the Pittsburgh Post-Gazette and that the city made a “mistake” in not reaching out beforehand.

Pittsburgh Planning Director Ray Gastil agrees and says, “we probably should have been out here earlier.”

Kevin Acklin, URA chairman and Mayor Bill Peduto’s chief of staff, says that the URA didn’t have time to receive community input before applying in July. However, when asked by City Paper when the idea for the transit connecter first materialized, Acklin couldn’t specify and said the date when the idea first came up was a little “irrelevant” because the city was always going to reach out to the community after applying for the grant.

Acklin also reinforced that community engagement is just beginning and nothing is set in stone. “This is the beginning, it is the front end of this process,” says Acklin. “Change is difficult, and we are committed to working with the community. … No hard decisions have been made about the final road.”

But it is unclear how much the city can do to address residents’ requests. Funds from the grant, if it’s awarded, can only be used for transit and development enhancements related to the potential connector, according to the grant’s guidelines. So, a multi-million-dollar project to address Four Mile Run’s flooding problems can’t be incorporated.

However, Chris Sandvig, from the Pittsburgh Community Redevelopment Group, says awarded grants can have a chain-reaction effect that makes other grants in the area more attractive. “Now that a potential transit project is there, it could make solving the stormwater issue more tangible,” he says.

But, the city also has work to do convincing Four Mile Run residents how the project will specifically benefit them. Many of the 50 residents at the meeting said they wouldn’t use the shuttles, with some saying they usually walk the mile-plus to the attractions in Oakland.

D’Andrea’s wife, Christine, believes the transit loop would attract drivers wanting to avoid paying for parking in Oakland, who will park in the Run for free and take the shuttle to their jobs.

But Gastil adds that the shuttle line could encourage people to not use their cars to go to work and that residents who live in Oakland, the Run and Hazelwood could potentially do this via the transit connector.

Acklin says this connection could potentially link the affected neighborhoods to a city-wide connection at the East Busway, while avoiding the potential widening of Second Avenue to six lanes to accommodate development. Acklin says the city “heard loud and clear” the concerns of the residents, and the city will be back soon to see if they can address some of them. But he also encourages residents to work on a compromise that can help the potential growth of Pittsburgh.

“Just because things are how they are does not mean they don’t have to change,” says Acklin. “We are an evolving city. We can’t just sit idly by and not take advantage of this new economy.”