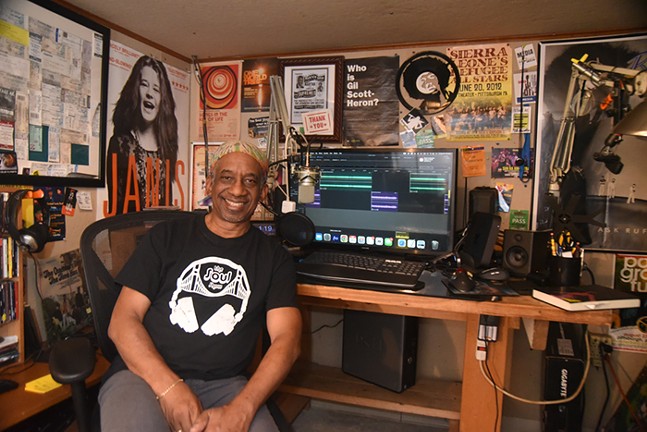 It didn’t take Mike Canton long to find a new home in Pittsburgh. A month after local listener-supported radio station WYEP canceled his long-running weekly program The Soul Show in August, it was picked up by Pittsburgh jazz channel WZUM. But while Canton says he’s honored to stay on local airwaves, he’s joining others — including listeners, musicians, supporters, and a current on-air personality — in calling for changes at his old station over racial diversity and equity issues he claims go back years.

“My goal is to shake the branches a little bit and wake them up,” says Canton, who also publishes a monthly music column for Pittsburgh City Paper.

The Soul Show — which launched in 1995 with hosts Stephen Chattman and Don Patterson, and has been helmed by Canton since 2009 — was terminated by WYEP on Aug. 31, amid other station changes. Also canceled was 31-year-long volunteer host Ken Batista’s Sunday evening show, An American Sampler, while Jesse Novak’s Roots & Rhythm show was moved from early Sunday afternoons to evenings.

“Based on feedback from listeners, we are working to bring listeners more of the great mix of music on the weekend that they hear during the weekdays,” said WYEP program director Liz Felix in the announcement.

While fans of An American Sampler expressed disappointment, those who mourned the loss of The Soul Show say the decision to eliminate one of the only two programs with a Black host indicates something more troubling. The other production — Big Town Blues hosted by Wrett Weatherspoon, the station’s “longest-serving volunteer DJ,” according to its website — remains in its original Saturday afternoon rotation.

Local musicians were among those who took their frustrations online, including jazz, funk, and soul band Afro Yaqui Music Collective, which posted, "Why 91.3 WYEP would cut his program, in favor of expanding existing (predominantly white) rock programming … deserves an explanation." Pittsburgh jazz artist Mandy Kivowitz-Delfaver, aka Phat Man Dee, wrote, "I will miss the little bit of diversity they managed to put on the airwaves.”

Canton and Batista aren’t the only hosts who have been absent from WYEP’s rotation.

Since 2014, fans of soul and funk music could also listen to a mix by longtime local DJ James Scoglietti, aka Selecta, on his Grand Groove Radio program on Friday evenings. But, in the weeks since the announcement, Selecta tells City Paper he’s decided to take time off “to ponder how to proceed with or without the show.”

“I was upset over the general optics, getting rid of Mike Canton and The Soul Show, given the fact that it was such a long-standing institution,” says Scoglietti. “It served as a vital outlet for exposing Black music from local and national artists alike.”

According to a 2021 Local & Services report, WYEP's audience is listed at an average of about 69,500 per week, and it was recently voted as the "Best Radio Station” for the second year in a row in City Paper’s annual readers’ poll.

Multiple WYEP listeners reached out to City Paper to share emails they recently sent the station. These include Pittsburgh residents who canceled their memberships, like Rachel Chapin-Paolone, who accused the station of "whitewashing the programming more and more,” and Lee Ann Antol, who moved her donations to WZUM, which will be airing The Soul Show on Saturday afternoons. Others shared evidence of moved support to WTJX, which also airs The Soul Show in the Virgin Islands, where Canton lived before moving to the Steel City.

John Kostuch, a 20-plus year listener and volunteer for the station, says he still loves WYEP but believes it “should follow its mission of championing diverse music and connecting the community.” He also alleges that "there has been a growing corporatis," calling out Pittsburgh Community Broadcasting President and CEO Terry O'Reilly's high salary. "For a non-profit that is constantly asking for donations and conscious of costs, nearly $300,000 for one year seems exorbitant." (According to ProPublica, O’Reilly made $291,742 in the 2021 fiscal year.)

Listeners and musicians aren’t the only ones taking note.

Kristen Linfante, the executive director of Chamber Music Pittsburgh, which is named as an “on-air ally” in Pittsburgh Community Broadcasting’s online list of 2021 media sponsors, says the local nonprofit is “deeply disappointed" in The Soul Show's termination "because it represented programming that served diverse groups of people in Pittsburgh.”

But, she says, the cancellation isn’t her only concern.

On Sept. 12, less than two weeks after The Soul Show was canceled, WYEP sent out an email, which some on social media called “tone deaf” and which Canton describes as “aggressively exclusive,” to its members. At the top of the email was the WYEP logo on a blue background, along with the text, “Off the bat, you may notice that our logo got a little facelift. You like?? We think the blue goes well with our eyes. But that is not the only improvement we've made…”

Canton immediately responded by sharing a screenshot of the email to his Facebook page, saying that he hoped it was fake. In the days that followed, he protested by Photoshopping blue eyes onto his profile photo and images of others, which drew the attention of the Pittsburgh Post-Gazette.

“I think the blue eye incident was a bigger issue than the show's cancellation,” says Canton. “I am more disappointed in them about the blue eyes.”

Linfante says WYEP’s “shocking and offensive reference about their new logo matching their ‘blue eyes’ is a prime example of a lack of sensitivity and awareness in the realm of diversity, equity and inclusion,” adding that these actions “have certainly caused us to take pause.”

While Canton says he hasn’t heard from the station about his posts, Sauter tells City Paper, “The email referenced used a terrible choice of words and the situation has been dealt with internally.”

Scoglietti also says “the tone deafness of sending out a mass email so shortly” after the cancellation of Canton’s show also added to his decision to take a break from the station.

In his Post-Gazette article, music writer Scott Mervis also points out Canton's share of a 2014 news photograph featuring an all-white WYEP staff being honored with a proclamation at Pittsburgh City Council.

Canton says he pushed WYEP over the years to lean on him and their other Black on-air hosts on various topics, and says he specifically asked them to invite the blues show host to be included in the City Council photo-op. He acknowledged they did address some of his concerns, including his request to allow Black volunteer hosts to participate in Black History Month programming.

But he says others were ignored, and when WYEP let him go during an in-person meeting, Canton says he told them, “I know you don’t really like Black music. Know how I know? Because I never see you at any shows.” He says he also told them they should bring in people of color to help with planning.

“When developing your plans to engage more diverse music audiences, ask yourselves whether you want to draw said audiences into the existing mix, or are you willing to flip the mix to draw the new?” reads one of the many messages Canton tells City Paper he sent WYEP over the past several years with suggestions on how to improve their racial diversity efforts.

The official end of The Soul Show came the day after at least 24 staff members at Pittsburgh Community Broadcasting, including WYEP employees, filed a petition to unionize. Among Pittsburgh Public Radio Union’s list of concerns was the need to foster a culture where "our concerns are respected, including those regarding racial equity."

The lack of Black employees in Pittsburgh media is an ongoing problem, as noted by Letrell Crittenden, director of inclusion and audience growth at The American Press Institute, in The Pittsburgh problem: race, media and everyday life in the Steel City. (Full disclosure: City Paper is no exception, and is currently one of five local media outlets participating in a DEIB training program with the Press Institute in order to improve internal structure, and diversity and equity practices and initiatives.)

On a DEI section on WYEP's website, O'Reilly writes that "Diversity, equity, and inclusion is not just an initiative at Pittsburgh Community Broadcasting: it is an inextricable part of who we are and is critical to our mission to serve all of Western Pennsylvania."

Pittsburgh R&B singer, songwriter, and producer INEZ, who was named WYEP’s Artist of the Year in 2020 and has performed in multiple concerts for the station, credits Canton as a cheerleader for Black music locally.

“Mike is a unifying thread in Pittsburgh’s Black music community. A supporter of many musicians here, myself included,” she tells City Paper in an email, adding that The Soul Show "no longer being on Pittsburgh FM radio is a loss for Black music representation in Pittsburgh."

But INEZ also credits WYEP with being the first station to break her record locally and says she’s a donating member.

“The hosts are some of my favorite people in Pittsburgh whom I love and support deeply," she says. "But with that love, comes duty."

INEZ says she reached out to WYEP to express her disappointment over recent events.

"I feel my candor was received and also the door held open for future conversations of betterment surrounding equity and inclusion," she says. "I, as a member, collaborator, and local artist, am holding them to it.”

Sauter says WYEP listeners “can rely on the station, as they have for nearly half a century, to continue to provide them with musical discovery of the more than 28,000 different songs we play each year.” When asked if they have any plans to add in new Black hosts or programming that showcases Black artists, Sauter says they "have nothing to announce at this time." But an internal email shared with City Paper shows at least one notable recent hire, a local Black musician who the email says will soon join the staff. [WYEP posted the official announcement of the new hire — Clara Kent, who WYEP's Twitter account said will be an on-air host — on Tuesday at 6:28 p.m. after this week's issue went to print.]

Canton says he believes that the ending of his show could be what helps enact future diversity and inclusion efforts at the station.

“[I]f it can reverse course a little bit and start picking up some interesting diverse things on the weekends or even in the evening, gosh, maybe even the middle of the day,” he says, “I will believe that this sacrifice of The Soul Show was just fine.”

UPDATE: James Scoglietti publicly announced his resignation from WYEP on Mon., Oct. 17. "For those that have been wondering of my whereabouts and the lack of Grand Groove Radio on the FM dial this last month (or so)," he posted on Facebook, "I resigned from WYEP in support of my friend Michael Canton & in opposition of the cancellation of the long running (27 years to be exact) 'Soul Show.'" He continued that while he was thankful Canton found a new home on WZUM, "it was EXTREMELY necessary for this action to occur in hope that (as a result) change can be ushered in."

Editor's note: Lisa Cunningham brought Mike Canton on as a contributing writer in 2020, after seeking out his advice on improving City Paper's categories for its Best of Pittsburgh readers' poll. She is also a sustaining member of WYEP.