In the past six years, 412 Cherry Way has gone by many names. The space, nestled underneath a Downtown parking garage, transformed from a 20-year-old Primanti’s into the Pittsburgh Poultry Company and saw multiple iterations of Venezuelan street food, the most popular an arepa-based concept called Chevere. But unlike the restaurants before it, Chevere came back.

Chevere now operates as Arepittas, but the rebranded restaurant is still serving up the same high-quality, authentic Venezuelan cuisine — just from behind a new logo.

Arepas, the restaurant’s namesake dish, are the quintessential Venezuelan street food. The hand-held dish is built on a corn-based flat bread (often the size of a taco tortilla, but with a thickness similar to an English muffin), that may be grilled, steamed, boiled, or fried. Though the finished product can be eaten plain, it’s often cut in half and piled with toppings.

There is no wrong time to eat an arepa. For breakfast, throw scrambled eggs inside the unleavened bread with beans and rice. Need a snack? Look for a simpler version, plain and buttered. Add meat, plantains, or vegetables, and an arepa becomes a meal.

At Arepittas, contrary to what the name implies, the arepas were anything but small. I tried two: the arepa pabellon and a build-your-own dish with pork, guacamole, and cheese. They were enormous. If it weren’t for smart use of tin foil, the split bread would have lost its delicious fillings to the table. 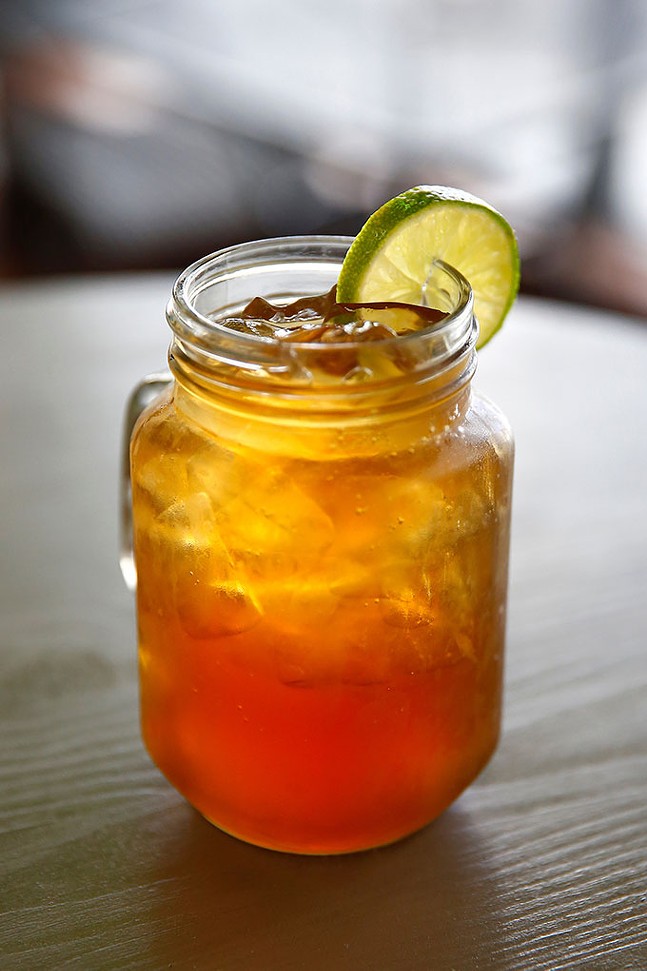 CP photo: Jared Wickerham
A ‘Papelon’ drink, made with lemonade and brown sugar

The naturally gluten-free bread was crunchy on the outside, but when broken, exposed a light, fluffy inside. The dough was a little sweet and a little savory, an easy complement to the mound of toppings. There were no rules for the fillings. In addition to traditional combinations — chicken and mayonnaise, beef and plantain — Arepitta’s options included everything from seafood and vegetarian options to an interpretation of Italian caprese.

Arepitta’s menu goes beyond arepas. A few specials are posted underneath the register featuring other classic street foods like chachapas, thin corn hotcakes filled with cheese, along with a handful of tacos. Look to the fridge for Malta, a traditional Venezuelan soda, and Jarritos Mexican sodas next to quesillo, the country’s version of flan.

Pabellon criollo was my second choice off of Arepittas’ menu. This dish is considered to be the national dish of Venezuela, because of its three colors. Arepittas, on its Facebook page, notes that the restaurant represents the “three great Venezeulan cultures,” from which “the Venezuelan lineage derives.”

It contained the same elements as my pabellon arepa: stewed, earthy beef, black beans, plantains, cheese with rice and plain bread on the side. Plantains brought the perfect grounding sweetness to the otherwise salty dish. With a zing from one of Arepittas’ many sauces — the restaurant’s true triumph — it was the perfect balance between hearty and heavy.

For many Downtowners, lunchtime is a riddle with no easy answer. Affordable, quick meals seem to be locked into sandwiches and fast-food. Arepittas gives Pittsburgh a much-needed option for something different. Prices are kept modest while packing a lot of flavor, and they have mastered the balance between fast service and good food.

Of all the restaurants to call Cherry Way home, I hope Arepittas is the one that sticks.

When the employee behind Arepittas’ counter asked, “Would you like any sauce?” I felt a little overwhelmed. There were so many options, and trust me, they’re all delicious — but start with the garlic and cilantro.

When I walked in, they were freshly frying arepas behind the counter.

Yes, Arepittas is a little hard to find. But rest assured, the trip is worth it.