Polamalu: The Inspirational Story of Pittsburgh Steelers Strong Safety Troy Polamalu by Jim Wexell
Troy Polamalu is arguably the best strong safety ever to play football. His honors, including being selected to the Pro Football Hall of Fame in 2020, are numerous. Polamalu’s flair for the game, his anticipation, and his ability to diagnose plays was unrivaled during his 12-year career.

But very few people, save for select teammates and family, really know the former Steeler. The key to Polamalu’s personality might be connected to a book, The Mountain of Silence by Kryiacos C. Markides, and one of its chapters, “Woe to the Monk Who Becomes Famous.”

Polamalu seemed to take that warning about fame to heart.

“That was kind of a mirror on Troy,” says Jim Wexell, author of Polamalu: The Inspirational Story of Pittsburgh Steelers Strong Safety Troy Polamalu. “He did become famous, and his view of that, I wish he would talk about it. Here’s a book to unravel the mystery of Troy Polamalu, and the answer is he’s even more mysterious after you read the book.”

Culled from a decade’s worth of interviews with teammates, family members, and childhood acquaintances, Polamalu sheds light on one of the most unique individuals ever to don a football helmet. 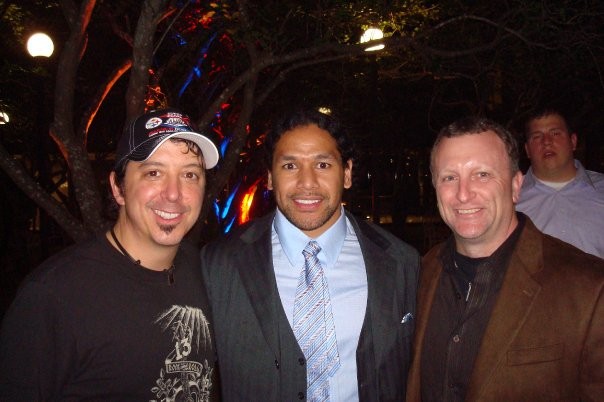 Photo: Courtesy of Jim Wexell
Randy Baumman from the WDVE Morning Show, Troy Polamalu, and author Jim Wexell
Wexell, who has covered the Pittsburgh Steelers for various news outlets since 1995, became, if not a trusted confidante, at least a familiar face, conducting numerous interviews during Polamalu’s career. But Polamalu declined to be interviewed for the book; any quotes in the biography are from past interviews while Polamalu was still a Steeler. That could have been a deterrent, but Wexell was able to use the absence of Polamalu’s voice to illustrate his most noted trait: humility.

“It’s almost perfect that he didn’t sit down with me,” Wexell says. “It made the book more real. If he would sit down and talk to me about his genius, what the hell would I be writing about his humility for?”

Wexell interviewed over 50 former teammates, coaches, and friends of the former Steeler. You’d think at least one of them bore a grudge or was upset by something Polamalu did or said. But no one – not ex-Steeler safety Mike Logan, who was supplanted by Polamalu in the lineup; or coach Bill Cowher, who often expressed his displeasure when players missed assignments; or linebacker James Harrison, never one to sugarcoat any situation – had a bad word to say.

Even players on other teams rarely spoke ill of Polamalu. At one Pro Bowl, Steelers linebacker Joey Porter was stunned by his teammate’s status.

“Joey said, ‘You think you’re a rock star, and then you see all the people you think are rock stars trying to get the seat closest to Troy,’” Wexell says. “And, of course, I’m sure Troy was unimpressed by all of that.”

While he was extraordinary on the field, Polamalu often did things that defied his status. Notably, Polamalu proposed to his wife, Theodora, at Mineo’s Pizza in Squirrel Hill and got married a few days later at a magistrate’s office. On more than one occasion, he bought extra food at restaurants to distribute to homeless people.

One of his few flaws was an enormous appetite.

“He eats too much, though,” his teammate Ryan Clark, one of his closest friends on the Steelers, told Wexell. “I used to always tell him, 'You’re the only Samoan in the league not playing D-line.'”

So many coaches and teammates made time for Wexell when they learned he was calling about Polamalu. Pouring through hours of tapes and transcribing pages at times left Wexell overwhelmed.

“I was right in the middle of it for 12 years, so I knew how [his teammates] felt,” Wexell says. “It didn’t surprise me. … But [former Steelers tight end] Heath Miller gets in his car, drives to the top of a hill for better reception, and gives me an hour. That simple act, beyond what he said, tells you a lot.”


What Troy Polamalu’s peers said about him:

Mike Tomlin, head coach: “There was a clarity in Troy’s life, and in his game. It really was about that. He felt that. He was never distracted by peripheral things, the past, or the potential for the future. He’s just a guy who cherishes moments, and he felt that.”

Ike Taylor, cornerback: “You know wise men, all they do is listen. They barely talk. But when they talk, they’re dropping gold nuggets. That’s Troy. When Troy talked, everybody listened, including the coaches."

Craig Wolfley, current Steelers broadcaster: "The greatest thing that stands out about Troy is his humility and his commitment to be a humble servant of others. You don’t find that with the players of today.”

James Harrison, linebacker: "Me and Troy had a lot of in-depth conversations where we’ve talked about life and just basically everything outside of football when I either had things I wanted to express or wanted advice on and then get his perspective. Troy is that person. And he’s going to give you an honest opinion, whether you want to hear it or not. That’s something you’ve got to respect.”

Ryan Clark, safety: “He’s just special, man. He moved in a different way. He thought in a different way.”Polamalu is available at jimwexell.com. 20% of the proceeds from orders through the website will be donated to the Troy and Theodora Polamalu Foundation.