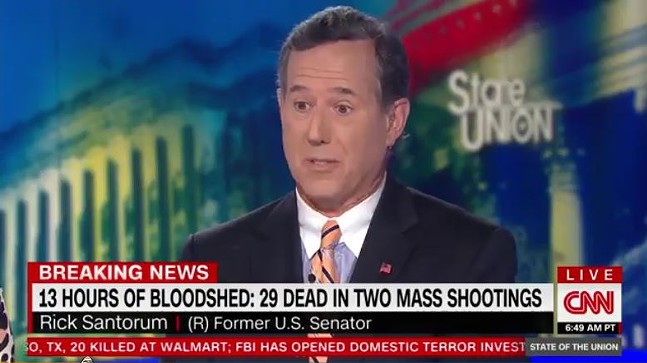 Screenshot of CNN
Rick Santorum
Tragedy struck twice last weekend, as mass shootings in El Paso, Texas and Dayton, Ohio killed more than 30 people and wounded over 50. Coverage of these shootings dominated cable news, which inevitably brought political pundits on to weigh in with their opinions on the events. One such pundit was Rick Santorum.

The former Pennsylvania senator and Pittsburgh-area native spoke on CNN’s State of the Union Sunday show and said that law-abiding citizens with guns help to deter mass shootings. He claimed that laws that restrict gun use actually put citizens at higher risk.

“What you see from a lot of these shootings that take place, several of them this year, is law-abiding people, not police, actually come and stop these things,” said Santorum. "Why? Because they have the right to own guns.”

Both Ohio and Texas are open-carry states, where citizens can legally carry guns just about anywhere. Santorum’s claim that law-abiding people with guns are preventing mass shootings is specious, to say the least.

According to the FBI, the U.S. experienced 50 “active shooter incidents” from 2016-2017. Only four of those incidents involved "citizens possessing valid firearms permits” that successfully stopped the shooter, according to the FBI. That's 8 percent of the shootings, the same number of shootings in which a civilian without firearms successfully stopped the shooter.

Out of 160 active shooter incidents occurring between 2000-2013, only four were stopped by armed security guards and just one was stopped by an armed civilian, according to FBI data.

Santorum went on to blame the victims of the El Paso shooting for being “soft targets,” implying that they might have been safe had they been armed.

“So they go after soft targets, that’s exactly right,” said Santorum. “The whole point is that when you restrict guns to law-abiding people, you make more soft targets.”

However, this statement was directly contradicted by the details of the Dayton shooting, in which the shooter was able to inflict lethal damage in the presence of "hard targets," like armed police officers. The alleged gunman in the Ohio city killed at least nine people and injured at least 27 people in 30 seconds before he was shot and killed by police. A similar scenario played out in Gilroy, Calif. last week, when the active shooter was confronted by police within a minute of his attack and then killed himself.

Santorum has a history of skewing facts and making unfounded claims when it comes to gun violence in America. After the Las Vegas mass shooting in 2017, the deadliest mass shooting in U.S. history, Santorum blamed violence in video games for motivating the attack. This claim was echoed by protesters at a far-right gun rally that took place earlier this year in Pittsburgh, in response to city council considering new gun restrictions. And both President Trump and U.S. House Minority Leader Kevin McCarthy cited violent video games as partly to blame for the shootings this week.