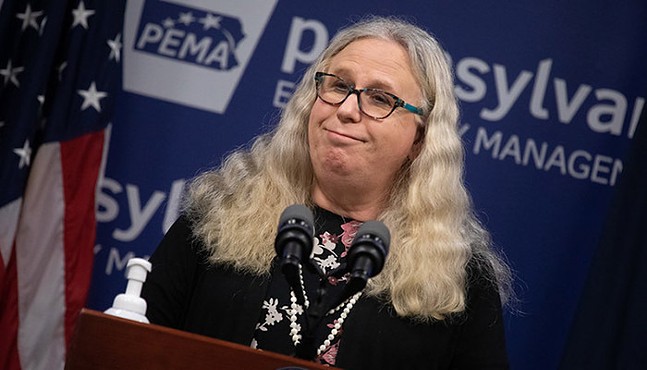 Photo: Official Governor Tom Wolf Flickr
Dr. Rachel Levine
On March 24, Dr. Rachel Levine was confirmed as U.S. Assistant Secretary for Health with a vote of 52-48 in the U.S. Senate. Levine, formerly the Pennsylvania health secretary under Gov. Tom Wolf, becomes the first transgender person ever confirmed for a White House cabinet position by the U.S. Senate. She becomes the highest-ranking out trans person to ever serve in the federal government.

“President Biden committed to appointing our nation’s most qualified leaders to tackle the pandemic, and he delivered in choosing Dr. Levine," said Parker in a statement. "Yet the importance of this moment extends well beyond the health of our nation alone. At a time when hateful politicians are weaponizing trans lives for their own perceived political gain, Dr. Levine’s confirmation lends focus to the contributions trans people make to our nation and deflates absurd arguments calling for their exclusion.”

During her confirmation hearing, Levine faced transphobic attacks from U.S. Sen. Rand Paul (R-Kentucky), who likened gender dysphoria to "mutilation." Levine has continually faced transphobic attacks throughout her tenure as Pennsylvania’s health secretary. These prompted Levine to address the attacks, after which Gov. Wolf lashed out at those making attacks against Levine solely based on her identity.

LGBTQ Victory Institute director Ruben Gonzales noted the divisiveness some senators brought to Levine’s confirmation, and said that today’s vote is a historic moment in light of those comments. Levine is the first transgender person to seek confirmation from the U.S. Senate.

“Dr. Levine’s confirmation is an exciting, profound moment in our nation’s history and will be viewed as a milestone in our community’s march toward equality,” said Gonzales in a statement. “While a bipartisan majority of senators voted with the best interests of our country in mind, a minority prioritized anti-trans hate over an honest review of Dr. Levine’s qualifications. Their vote to ride the extremist political winds of the moment will be judged in time, because history never looks fondly on those who vote on the side of bigotry.”