Former Pa. congressman and presidential candidate Joe Sestak might be a NIMBY 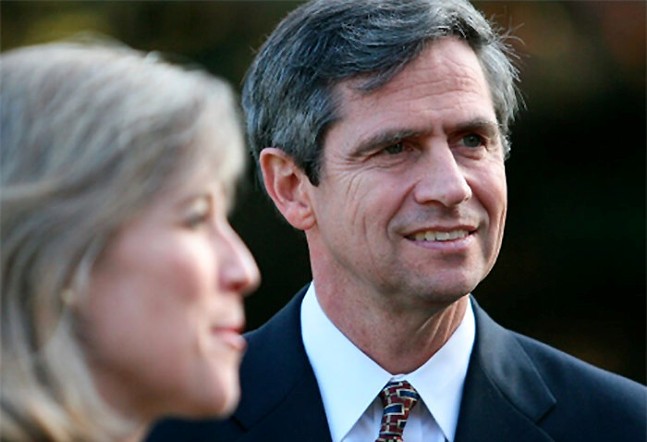 Photo: Joe Sestak for President
Joe Sestak
When former Navy Admiral and Pennsylvania U.S. Rep. Joe Sestak ran for a Pennsylvania U.S. Senate seat in 2016, he relied on sidewalks more than most candidates, as he walked 422 miles across the commonwealth, including stops in Pittsburgh.

On Sunday, Sestak announced his candidacy for president, becoming the 24th Democrat to run for the nation’s highest office, but it doesn't look like sidewalks, bike lanes, or any roadway improvements will be part of his platform.

In fact, he's previously made splashes at community meetings in his hometown of Alexandria, Va. for criticism of a road design project that would add a bike lane and sidewalks to a road in his neighborhood.

Some are comparing his criticism to behavior typical of community activists described as NIMBYs (Not In My Back Yard). This is a mindset that is generally opposed to neighborhood development and street redesigns on the basis that they will change the character of the neighborhood, and has been successful in blocking bike lanes, affordable housing, high-rises, and other developments.

In an April op-ed published in the Alexandria Times, Sestak wrote in opposition to a road redesign project on Seminary Road in between Howard Street and Quaker Lane. He also spoke to a Times reporter on June 20 and reiterated why he was opposed to the redesign, which would remove two lanes of traffic and add sidewalks to the 25 mph road, as well as extending bike lanes for a mile that would connect with more bike infrastructure in the Northern Virginia city. Sestak says he has attended four to five meetings concerning the road redesign proposal.

Sestak’s opposition stems from the arguments made by Alexandria officials that the redesign is meant to improve safety for road users. Sestak wrote that safety should be improved in lower-income parts of the corridor first, since figures show that more pedestrian and cycling crashes occur there. He says it is disingenuous for Alexandria leaders to make the project about safety.

“The city recently confirmed its intention to use funds to make this safe street section ‘safer,’ wrote Sestak. “However, real safety concerns are elsewhere — in low-income neighborhoods that lack a voice in safety spending.”

Jonathan Krall, of advocacy group Grassroots Alexandria, is in support of the redesign, including the bike lanes, and agrees that road redesign and bike lanes should occur in all neighborhoods in Alexandria. He was involved advocating for Alexandria’s Bike Master plan, which was finalized in 2016, and shows proposed bike lanes extending to many roads of Alexandria, including the lower-income stretches of Seminary Road that Sestak is referencing. He also notes the section of Seminary Road proposed for a redesign is currently four lanes, but he connects to Janneys Lane, which is two lanes.

Krall says Sestak’s opposition is a typical example of NIMBY, because Sestak says he is supportive of bike lanes, just not in the particular area they're being proposed (about a half-mile from his home).

“That is a classic NIMBY,” says Krall. “They say, ‘I really like bike lanes, but someplace else.’” 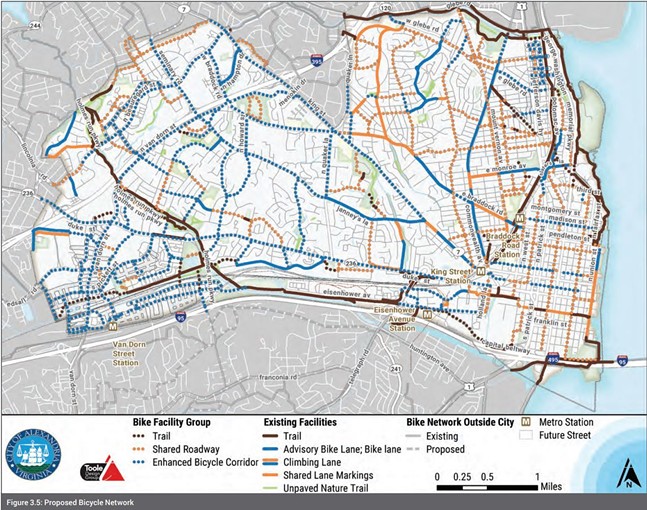 Alexandria's bike master plan
Sestak rejects the NIMBY label and says that he does support bike lanes in Alexandria, and notes that he met with and received support from the Bicycle Coalition of Greater Philadelphia when he ran for Senate in Pennsylvania. Randy LoBasso of BCGP says that the cycling-advocacy organization doesn't support political candidates, and that BCGP met with Sestak and other candidates to advocate for the group's issues.

Sestak says bike lanes should occur first on Seminary Road north of I-395, where there have been three times as many crashes since 2015. He also thinks it is unfair that the proposal is aimed at a road in a wealthy part of town, and not a low-income part.

“It’s better to have bicycle lanes wherever you want,” says Sestak. "But you better have it over there first, for the lower-income residents.'”

But creating bike lanes north of I-395 wouldn’t connect to much other bike infrastructure, leaving cyclists back on roads with heavy car traffic if they ride south to try and reach bike lanes on Janneys Lane.

Krall says the proposed bike lanes and road design on Seminary Road between Howard and Quaker is part of Alexandria’s overall goal of creating more transit corridors that provide better options for cyclists and pedestrians. He notes that sections of Seminary Road in this stretch don't have a sidewalk, and creating bike lanes there would connect to a more than two-mile stretch of bike infrastructure Janneys Lane and King Street.

He says creating policies to reduce driving is the best way for local governments like Alexandria to fight climate change. Krall says bigger changes, like energy policies, must come from state and federal governments. Local governments can't have much of an impact there besides creating green standards for construction, so buildings use less energy. But considering that 62 percent of Washington, D.C., area residents use their cars daily to get around, Krall says providing residents more non-car options to get around is paramount for Alexandrians to fight climate change locally.

Sestak has received backing from environmental groups in the past, including endorsements from the Sierra Club and the League of Conversation Voters in his 2010 Senate run against Pat Toomey. His presidential campaign website states he supports banning future offshore drilling, increasing fuel efficiency standards and ending subsidies for the fossil fuel industry. “Most critically, we need to break our addiction to fossil fuels as soon as possible,” reads his campaign website. While running for Senate in Pennsylvania in 2016, he supported a moratorium on natural-gas drilling in the commonwealth.

But Krall says politicians need to address the nation’s automobile use if the U.S. is to really combat climate change, and that starts at the local level. According to the U.S. Environmental Protection Agency, transportation accounted for 29 percent of greenhouse gas emissions in the U.S. in 2017. That is the largest sector in the country and has been increasing over the last several years.

“Politicians don’t like talking about it,” says Krall. “For all the climate change things to talk about, they never talk about the impact of cars.”

Sestak insists his criticism of the road design is not about bike lanes or being anti-environment.

He says he got involved because of the way city officials were framing the project as a road safety issue, and that the section being proposed for a redesign is not the most unsafe in the area. He adds that he did not hear local officials make a case for the bike lane being a pro-environmental step.

Sestak says the eroding trust in government motivated him to speak out and says Alexandria officials should have been more transparent about why they were proposing the redesign.

“I think the biggest issue is lack of trust in government,” says Sestak. “If you are saying this is about safety, but they shouldn’t have safety in the areas where the highest [amount of fatal crashes], then I thought I should speak up.”

Krall says there have been many meetings discussing the potential of bike lanes and redesigns in the Seminary Road corridor over the years, and it was at the most recent meetings, with the final proposals, that drew the attention of more community members, particularly those in opposition to the project.