“If I am operating out of love, my capacity to create and serve is supernatural.” 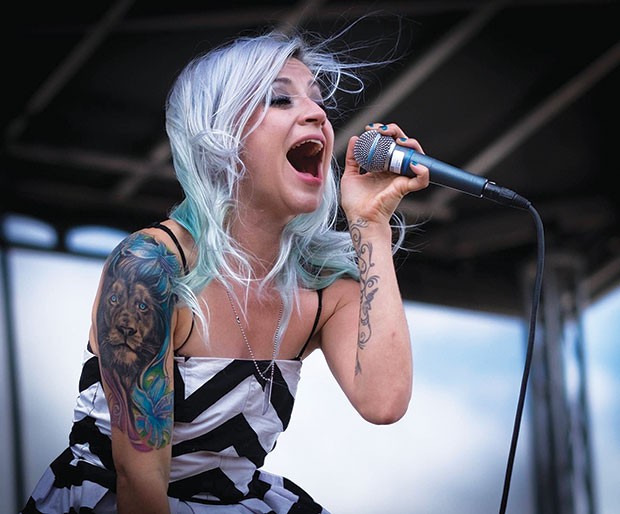 Lacey Sturm with Palisades, Letters From the Fire and Stitched Up Heart

In the early 2000s, she was the frontwoman of Flyleaf, an alt-rock outfit out of Belton, Texas. After three EPs, the band was signed in 2004 by Octone Records and began touring with bands like Stain’d, Disturbed, Breaking Benjamin and Three Doors Down. The group enjoyed great success, charting three times on the Billboard Top 100 and many more times on the alternative, hard-rock and Christian charts. In particular, the band’s 2009 album Memento Mori hit No. 8 on Billboard, and No. 1 on the alternative, Christian and hard-rock charts. The band’s hard-driving rhythms were led by Sturm’s vocals, which mixed angelic melodies with chilling and even blood-curdling screams.

After the band’s third release, New Horizons, however, Sturm — who was born in Florida, raised in Texas and now lives in Pittsburgh — left the band to concentrate on her marriage and motherhood.

“Looking back, I know that leaving Flyleaf to figure out motherhood was one of the most difficult and best decisions I’ve ever made,” Sturm tells City Paper. “I can’t say I have any regrets, because even the difficult parts of that have taught me so much. I’m thankful to learn and grow from the kind of pain that comes with making the right choice for my heart and my family.”

But life after Flyleaf didn’t mean Sturm would stop working. Last February, she released a debut solo album, Life Screams. Her tour in support of the record is a 36-day odyssey that began in Florida and will wrap up here on Feb. 14, at Diesel, on the South Side.

“We are so excited to play Pittsburgh. I feel so at home,” she says. “I like the cold much better than the hot summers. I like to visit the South, but I love the cold winters. I am a fan of snow and fireplaces and cozy old-man sweaters.”

Besides working on her music, Sturm also began writing, authoring two books — The Reason: How I Discovered a Life Worth Living, in 2014, and The Mystery: Finding True Love in a World of Broken Lovers. In her writing, she talks about her troubled past and how finding comfort and solace in the church saved her life. While not explicitly a Christian-rock act, Sturm (now and with Flyleaf) is deeply rooted in her faith.

“When I know who I am through my faith and relationship with God, then I am such a better wife. When my marriage is strong, my kids are more secure and at peace. When I feel that freedom as a mom, I overflow with creativity and can’t hold it in. I respond to the life blooming around me with songs and words,” Sturm says of her creative outlets. “I heard this quote one time that goes, ‘Lovers out-work workers.’ Whatever I am doing, if I am operating out of love, my capacity to create and serve is supernatural.”

The record is pure hard rock, but offers a few welcome surprises. A lot of songs, like “Soldier,” “I’m Not Laughing,” “Life Screams” and “You’re Not Alone,” will more than satisfy Sturm’s fans from the Flyleaf days. But others, like “Rot” and “Vanity,” break the mold of what should be included on a hard-rock record. While technically two tracks, the songs, starting with “Vanity,” transition into one. “Vanity” is a mostly spoken-word track where Sturm argues with a male voice (hip-hop performer Propaganda); it’s not an argument between a couple, it’s an inner struggle of a person trying to do the right thing, but being pulled back into dangerous behaviors. It bleeds directly into “Rot,” where the pounding rhythms provide the perfect canvas for Sturm’s vocals, which seem simultaneously desperate and hopeful: “So infatuated by the darkness and so surrounded by the light / Oh my God, save my soul / And still I want what’s pure and want what’s right / But I need another fix tonight / Oh my God, save my soul.” It’s almost like a mini-concept album on its own. And despite the complexity of the subject matter that Sturm deals with on Life Screams, preparing the record was a labor of love, without the labor.

“Life Screams was the easiest process. It felt like hanging out with my family and doing what we love,” Sturm says. “If other people appreciate what we did on Life Screams, then that is an amazing bonus. There were no expectations for anything [beyond] just getting to be honest on the album. The amazing response we got — for just doing what we love — is such a beautiful gift to our hearts.”