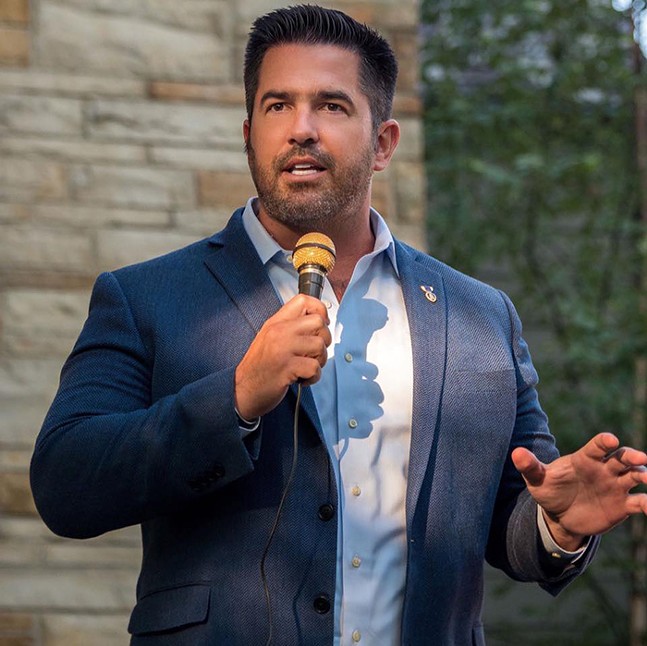 Photo: Courtesy of campaign
Sean Parnell
After teasing a run for Pennsylvania’s open senate seat last month, former Congressional candidate Sean Parnell (R-Ohio Township) has officially launched a campaign for U.S. Senate. Parnell, an Ohio Township resident and U.S. Army veteran, announced his Senate run in an interview with KDKA, and also held a special event in McCandless on the evening of May 5.

He joins an already crowded field of four candidates, and many more are expecting to announce over the course of the year. Parnell, a native Western Pennsylvanian who has earned Purple Hearts for his service, is best known for his book about his experience in Afghanistan, Outlaw Platoon. He is also a Fox News contributor who has said controversial statements while on air, including the idea that women can have fulfilling lives without men is “nonsense” and that some organizations supporting veterans create an “unhealthy entitlement” mindset.

Parnell also told KDKA that he embraces views that are anti-abortion, pro-Second Amendment, and says he is a “defender of the police.”

Before Parnell’s announcement, a group of elected Republicans and GOP chairs from across Pennsylvania encouraged Parnell to run for U.S. House in Western Pennsylvania and not U.S. Senate, with the group preferring former Lt. Gov. candidate Jeff Bartos (R-Montgomery). But Parnell did receive support from U.S. Rep. Guy Reschenthaler (R-Peters), who was rumored to be interested in a Senate run himself.

In 2016, Parnell initially supported U.S. Sen. Marco Rubio (R-Florida) for president over Trump and even tweeted that Trump needs to release his tax returns. But in 2019 while in Pittsburgh, Trump announced that Parnell would be running for U.S. House, and then subsequently endorsed Parnell several times in his race against Lamb. After Parnell’s election defeat, which he never conceded, he sued Pa. Gov. Tom Wolf, then Secretary of State Kathy Boockvar, and the Pennsylvania legislature (which is controlled by other Republicans), claiming that the state's mail-in voting law is unconstitutional. This suit came from Parnell, even though he publicly supported mail-in voting during the 2020 primary election.

The Senate race has also attracted many Democrats — like Lt. Gov. John Fetterman (D-Braddock) and state Rep. Malcolm Kenyatta (D-Philadelphia) — and is likely to be the highest profile election in 2022, as it could control which party controls the Senate. The Pennsylvania Democratic Party issued a statement about Parnell entering the race, saying they expect to see the Republicans attach themselves to Trump, who lost Pennsylvania in 2020 to President Joe Biden.

“The headaches continue for the Pennsylvania GOP as sore loser Sean Parnell becomes the latest candidate to join their ‘super MAGA Trump’ primary,” says Pa Dems spokesperson Jack Doyle. "Buckle up as this collection of failed candidates spends the next eleven months running over each other to spread conspiracy theories and sell out Pennsylvania, all in an effort to secure Trump’s coveted endorsement.”