Forbidden Broadway is back! Pittsburgh CLO, in its cabaret space, recently closed the first, long-running edition of this New York-born spoofing staple, and has now opened a retooled version called Forbidden Broadway: Special Victims Unit. Whatever the title, FB remains a jaundiced look at the Great White Way, with satirical lyrics by creator Gerard Alessandrini put to B'way tunes and poking fun at the outsized egos and ethos of the commercial American musical.

I take a lot of grief from a lot of people because of my love for show tunes, so something like FB is a reward for my cult-like devotion to the craft. But there is a problem, best exemplified by a bit in the first act.

Here the company lampoons last year's Tony-winner The Light in the Piazza. The skit itself is absolutely hysterical, thanks in no small part to Christiana Craig-Dukes and Tom Schaller as the numbingly idiotic young lovers. But as my annoying braying was ringing out through the venue, I did notice that not a whole lot of people were laughing. And not just because the show hasn't yet made it to Pittsburgh; a few of the jokes are based on the fact that Adam Guettel is the grandson of Richard Rodgers.

The issue is addressed somewhat in the second act, when the targets become broader and more user-friendly: Beauty and the Beast, Ethel Merman, Phantom of the Opera, Carol Channing, etc. I have to say that I wasn't that crazy about this section, although Tim Brady's piss-take on Robert Goulet is scathingly entertaining, and Christina Laitta's evisceration of both Liza Minnelli and Barbra Streisand is worth the price of admission. Plus, as a huge bonus, accompanist Deana Muro gets a chance to come from behind her piano in a funny take on the frustrations of rehearsal pianists.

While I love Forbidden Broadway, I can't imagine that Pittsburgh CLO has gone to such great expense to put on a show just for me. But there's no question that I'm grateful just the same. 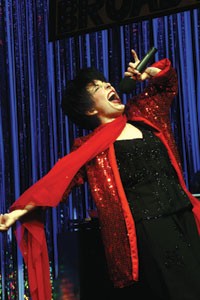