For this UPMC surgeon, music is an important prescription for a successful procedure | News | Pittsburgh | Pittsburgh City Paper

For this UPMC surgeon, music is an important prescription for a successful procedure

“Music influences us in the operating room just as much as it influences the mood inside of a restaurant.” 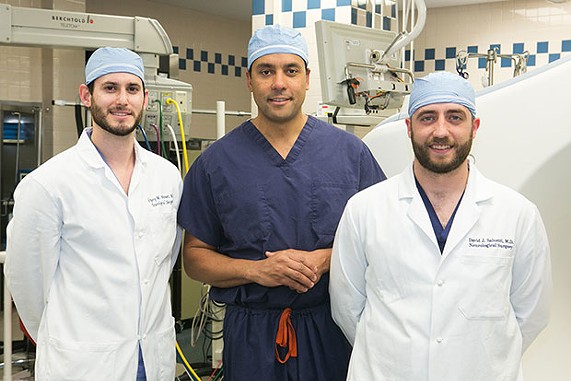 Imagine you’re about to go under the knife for brain surgery. You’re given anesthesia and your eyelids start to get heavy. Right as you begin to lose consciousness, you hear the opening notes of The Beatles’ “Come Together.”

Sure, it could be a dream or an anesthetic-induced hallucination. But if your doctor is David Okonkwo, it’s all part of the routine. The UPMC neurosurgeon and his staff listen to a variety of music while performing surgeries. The tunes range from country to classic rock to EDM; it might be the Selena Gomez Pandora station, or Pink Floyd’s “Comfortably Numb” (which would be fitting).

“I have a broad appreciation for music across many disciplines,” Okonkwo says. “I can find the beauty in everything from Mozart to [U.K. metal band] DragonForce, and everything in between. But for me, it’s fantastic to be exposed to new and different music, day in and day out, by every successive generation of neurosurgeons in training.”

Okonkwo typically allows the neurosurgeons in training to choose the music, but his current residents — Gregory Weiner, in his sixth year, and David Salvetti, in his fourth — have trouble agreeing on selections. The two are split on acts such as The Beatles, Led Zeppelin and Miranda Lambert, among others. Their only consensus: no Justin Bieber.

And this isn’t surprising to Okonkwo. He understands the subjectivity of music preferences.

“This is the reality of music,” he says. “It’s incredibly personal … there’s something for everybody. Every jar has a lid, right?”

Weiner says the music is meant to “calm the air,” never too loud or too soft. Salvetti echoed this sentiment.

“[The music] just sets the tone of the room, kind of chills things out a little bit,” Salvetti says. “Sometimes surgery can get a little intense, and I think [music] helps keep people going for the day.”

Okonkwo’s typical day is eight to 10 hours long, and could involve one large operation or several shorter procedures. During the actual surgeries — not including preparation and cleanup — he says the operating room has music playing about 90 percent of the time.

“For us, music is a complement to our workplace, just as it might be if you work on a painting crew and you’re listening to music all throughout the day while you’re doing a job,” he says. “For those of us who live and work in the operating room on a daily basis, that is our home away from home.”

He says the doctors never listen to music during emergency operations, or during certain critical points of an operation.

“There’s a specific period of time that requires absolute concentration, undivided attention, where you need to be communicating very specifically to the anesthesiologist or to your assistant, and there just can’t be any distractions,” Okonkwo says. “And you can feel that in the room. It’s just appropriate that this is the moment where we’re going to hit the pause button on the music, because this is what we’re here for.”

However, he also says some moments during an operation need music, or else the atmosphere of the room would feel strange.

“There are other parts of the operation where if there’s silence,” he says, “it would be as bizarre as listening to Metallica during that extremely delicate portion of the procedure — [that part] where you’re under the microscope, doing that critical maneuver that’s going to be the difference between whether this person’s eyesight is saved or not.”

Those are the times that remind him what a critical role music plays in everyday life.

“It’s in those moments that you realize how much music is woven into the fabric of what it is that we do on a daily basis,” he says. “[M]usic influences us in the operating room just as much as it influences the mood inside of a restaurant, whether it’s lunch or whether it’s the happy-hour crowd.”

For Okonkwo, listening to music during surgery isn’t just about staying calm; it’s also about staying focused and energized. Ten hours on your feet performing intensive and complex operations takes its toll, and music helps him concentrate. And at the end of a successful surgery, he plays music to celebrate a job well done.

“That’s when we start listening to things that are up tempo, and things that are making people smile and getting people energized again,” he says. “And it’s also a little pat on the back for a job well done and a good day had by all."