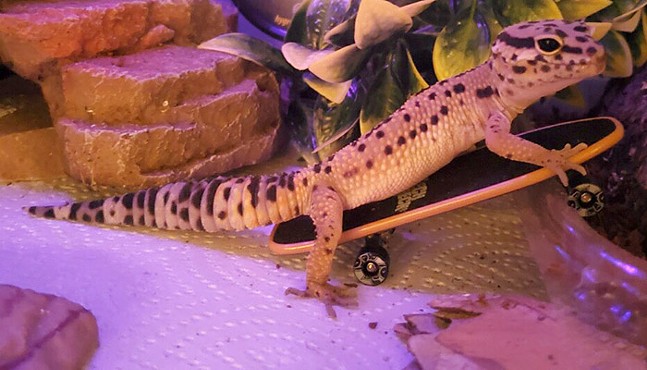 Photo: Courtesy of Lauren Girvin
Malvo the leopard gecko
As people spent increasing amounts of time at home during the pandemic, cuddly and furry friends became common additions to families and homes. But for Laura Girvin, the pandemic brought a chance to introduce her partner to a new kind of pet: lizards.

After Girvin and her partner’s hamster passed away early in the pandemic, they decided they wanted another living thing around the apartment. Her partner never had a lizard before, but Girvin used to work for a reptile breeder, which gave her some experience with the non-mammalian creatures. Thus, Malvo the leopard gecko entered their life.

“Leopard geckos are a great introductory lizard for anybody who wants to get into the reptile world,” says Girvin. “They're really docile and tame, and they're pretty hardy.”

Malvo was only three or four weeks old when Girvin and her partner got him from The Enclosure in Plum. Named for the season one antagonist of Fargo — Girvin has never seen the show, but she trusts her partner’s description of the character as “reptilian-like” — Malvo is now about a year old and may live for another 15-20 years, or more.

Girvin was unemployed for part of the pandemic, freeing up more time to put towards Malvo’s care. Because she and her partner weren’t spending as much money going out, they could also invest it in Malvo.

Girvin did research and built upon the knowledge she gained while working for Tom Kelly, the chief reptile expert of Steel City Reptile Expo. When a cricket shortage during the pandemic — due to shipping delays and an increased demand for reptiles — threatened Malvo’s food supply, Girvin was prepared and went back to The Enclosure, which breeds their own crickets.

Other than feeding time, however, Girvin and her partner had limited interactions with Malvo, since, according to Girvin, reptiles don’t typically form bonds with their owners like mammals do. Since Malvo is nocturnal and Girvin and her partner are diurnal, the hours where everyone is awake are slim. But when they do hold or play with Malvo, they are careful to remember how different he is than other pets.

“What I think is really interesting about lizards, and not furry animals, is that they move and act so different. And I think a lot of times we anthropomorphize,” Girvin says. “But with lizards, you really shouldn't do that because they are so different than us.”

Girvin understands why some people are hesitant to get lizards as pets, or are scared of them, and enjoys teaching people about the creatures’ habits and preferences, which she thinks can help people better appreciate them.

“If there's ever going to be another pandemic, my advice is to get a lizard,” Girvin says. “Because you shouldn't socialize them like with other lizards, and they don't really like people all that much. So it's kind of the ideal pet.”