“It’s fucking great to have someone pay you to smell your dirty shoes.” 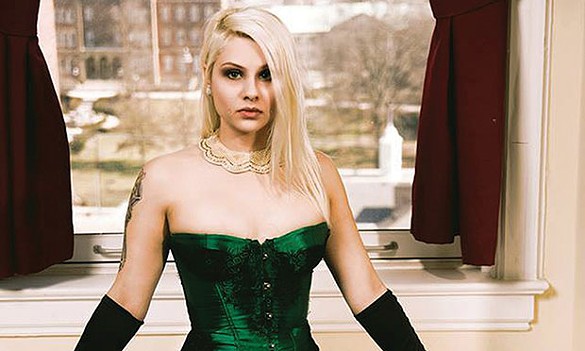 “Initially, I was on a fetish site that was similar to FetLife [a social-networking site for those into fetishes],” Flame says. “I saw girls, their profile was basically an ad where they were charging for [camera] time as a domme. I just kinda kept thinking, ‘I could do that,’ and it just kinda went from there.”

That was in 2010, and now the 24-year-old has moved beyond camera work to real-time sessions with a developed client base. While maintaining her domme business, she also works as a hair stylist.

Dommes, or dominas, as she prefers to call herself, are professionals who are paid to create power-exchange scenarios for their clients. Some of the activities listed on Flame’s application for potential clients, or “slaves,” are public humiliation, needle play, orgasm denial and couples’ sessions. Sessions are negotiated on a client-by-client basis.

“Foot fetish is definitely the most vanilla fetish, but it’s the most requested,” she says.

While it is considered sex work, Flame’s profession isn’t prostitution and isn’t subject to the same laws. She works from her apartment, where her living room serves as her dungeon.

Her typical equipment includes whips, riding crops, a spanking bench, wooden shackles and floggers (a short-handled, multi-lashed whip). “The rest of my stuff I have in storage until I can get a bigger place,” Flame says, smiling.

She receives a lot of her equipment and clothes as gifts from clients as a form of tribute or as thanks for a session. Financial domination of different degrees is common for slaves, who enjoy buying presents or handing over bank-account information as an act of submission.

In order to schedule a session, Flame requires potential slaves to fill out an application. If she accepts it, an in-person meeting is set up before a session is scheduled. She also requires an upfront deposit for initial meetings to protect her from clients with last-minute cold feet. Safety, in all aspects of the exchange, is highly important to her.

“I get asked a lot how to do this safely. It really comes down to common sense. If something seems shady, just don’t do it,” she says.

Flame checks up on her clients’ information before meeting with them, and during sessions, cleanliness, sanitization, routine check-ins with the client and using a safe word are musts.

Most of her clientele are middle-aged white men. Flame says minority and female clients are rare. “Women can get it for free. The women who I have had, they wanted more of a professional experience,” she says.

Maintaining a client base takes a tremendous amount of work, which Flame does with a robust social-media presence. “People tend to come and go,” she says.

Most of Flame’s relationships with her slaves are friendly. “I do develop some sort of caring or bond,” she says. However, maintaining the power dynamic is such an integral part of the work and fantasy-building that she has to be careful to maintain her emotional distance. “I had a really loyal slave, who I saw on a weekly basis. We became too close in a friendship, and it kind of ruined everything,” she sighs.

Make no mistake — domming isn’t all strutting around in high heels and humiliating clients for top dollar. It takes a tremendous amount of time, work, learning from mistakes, and energy to have a successful career.

“I spent a really long time before I ever did real-time [sessions], working online and researching things. I wasted a lot of time, I got ripped off a lot, I got lied to a lot,” she says. “I went through a lot of crap to get to the point of knowing what I know now.”

Flame herself worked with another domme when she first started doing real-time sessions with clients. The arrangement allowed her to both feel safe and learn.

“It’s a lot of fun, honestly,” she says, “If it’s not fun, you really shouldn’t be doing it. It’s fucking great to have someone pay you to smell your dirty shoes.”

Medical marijuana is coming to Pennsylvania