For Bettor or Worse

On the face of things, the Steelers Feb. 1 Super Bowl match-up against the Arizona Cardinals doesn't exactly send shivers down the spines of the Black and Gold faithful.

True, the Cardinals were the first NFL team to clinch their division this year. But they did it with just nine wins. Three of the teams they played failed to post a winning record, and combined for just 13 wins all season. That's just one more win than the Steelers got all by themselves in the regular season ... which is one reason the Steelers are favored by 7 points.

But football is a funny thing. The Miami Dolphins went from one-win rejects in 2007 to division winners this year, proving that anything can happen in a season. And while Miami surprised people all season long, the Cardinals only need to surprise the Steelers once.

It's easy to forget that in the world of Pittsburgh sports, where reporters are often just another group of die-hard fans. It can be hard to get an honest picture of the Steelers' chances. So to dissect the game, City Paper consulted sources with a purely mercenary interest: professional gamblers.

So far, they've yet to put their money where so many Pittsburghers' mouths are.

"I haven't heard a solid opinion yet that would convince me to bet one way or another," says Tony Miller, the race and sportsbook manager of the Golden Nugget Casino in Las Vegas. "I think it really is up in the air."

At 12-4, Pittsburgh never lost a division game and except for the game against Tennessee, they never lost by more than 9 points. But the Cardinals have a high-scoring offense led by quarterback Kurt Warner. "He is the same Kurt Warner that he has always been," Steelers coach Mike Tomlin said at a Jan. 20 press conference. "He makes quick decisions, he doesn't make mistakes. He absolutely tortures you when he recognizes pressure and he gets the ball out of his hands."

On the other end of many of those passes: receivers Larry Fitzgerald and Anquan Boldin. Due to recent injuries to the latter, Fitzgerald, a former Pitt Panther, has stepped up as the Cards' biggest weapon -- and the best receiver in the NFL. As Tomlin put it, "Larry Fitzgerald is quite simply the best in the world, down the field on one-on-one situations. If we are going to be successful in Tampa, we need to limit the number of times we are downfield with him one-on-one."

But the Cards' passing game won't be the Steelers only problem. "Add to that passing offense the fact that they've started to run the ball well behind Edgerrin James the past few weeks and they're even more dangerous," says Tony Miller. 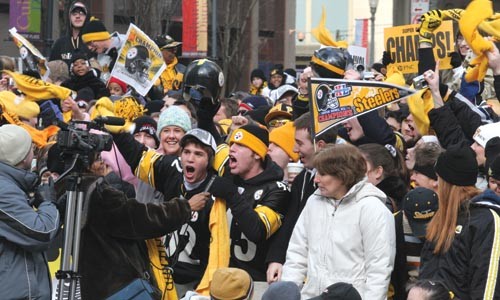 "But Arizona's offense is just half this picture," Miller adds. "Pittsburgh has the best defense in the league, and they've shown they can stop potent offenses all year long." At the heart of that defense was linebacking beast James Harrison. In 2008, Harrison garnered Defensive Player of the Year honors, third runner-up for league MVP and a trip to the Pro Bowl.

"How the Arizona offense and the Pittsburgh defense perform is going to say a lot about how this game goes down," says Miller.

Professional sports handicapper J.R. Miller (no relation to Tony) agrees. "It's an old adage, but a consistently true one -- offense makes headlines, but defense makes games," he says. "Arizona is known for the offense and Pittsburgh for the defense. So let's just assume that those two units offset one another.

"That means the key to this game could come down to Pittsburgh's offense against Arizona's defense."

J.R. Miller, a veteran gambler who runs the Web site www.professionalgambler.com, says that while Arizona has a "good, solid defense," the Steelers offense could be the real difference. Quarterback Ben Roethlisberger "can sling it around pretty well," Miller says. "If he can avoid the turnovers -- which you can't predict in a game like this -- they could be in pretty good shape."

But it's not that simple.

"The key for the Steelers is also the key for the Cardinals," Tony Miller says. "If that defense can stop the run and force Roethlisberger to make bad throws, then we could be looking at a different ballgame."

Or even a game very similar to the Steelers' loss to the Philadelphia Eagles in Week 3, a defeat far more humiliating than the 15-6 score would suggest. The game established a familiar pattern for the rest of the season -- plays ending with quarterback Ben Roethlisberger on his back. Behind an offensive line that has struggled mightily during the season, Roethlisberger was sacked eight times that game. He's been sacked 51 times during the regular and post-season. So far.

Which means a lot turns on the options Roethlisberger has at his disposal. In setting the odds on the game, Tony Miller says, "When we look at the Pittsburgh offense, we know that if [running back] Willie Parker runs well and [receiver] Hines Ward is healthy, then the Steelers are going to have a pretty good chance in this game.

"If Willie Parker can run well -- if he can get four or five yards on first or second down -- that's going to open up the passing game for Roethlisberger. He's going to be able to go over the middle to Ward and [tight end Heath] Miller, and he's going to get those looks at [receiver] Santonio Holmes deep."

Right now, Tony Miller says a lot of the early money is coming in on the Arizona Cardinals. That's not necessarily because gamblers think Arizona will win: The Cardinals are 7-point underdogs, so if they lose by less than that, the money behind them will pay off. And Pittsburgh has a way of keeping games interesting -- more interesting than anxious fans would like.

However, thanks to the Steelers' strong nationwide fan base, Tony Miller predicts quite a bit more money will come down on their side in the days ahead.

And while J.R. Miller says it's still early, he thinks the Steelers are likely to win the Super Bowl.

Does that mean he's putting his own money on the Black and Gold?

"I didn't say that," he says, laughing. "That's a different question all together in this business."

If you get a feeling of déjà vu watching the Arizona Cardinals, you're not alone. In 2007, when Mike Tomlin took over as Steelers head coach, he won that job over popular Steelers coordinator Ken Whisenhunt.

Whisenhunt left to coach the Cards, but he took a little Pittsburgh with him, to add to some expatriates who were already there. In fact, the Steelers-Cardinals Super Bowl looks like a bit of a reunion. Here are some Cardinal jerseys and faces to look out for Sunday.

Russ Grimm. The Cardinals assistant head coach held the same post here in Pittsburgh. He too was passed over in favor of Tomlin, but not before he got a priceless souvenir: a Sunday Pittsburgh Tribune-Review front page announcing Grimm was hired as head coach. Oops. If the Trib announces the Cardinals won in Monday's edition, be sure to get a second opinion.

Brian St. Pierre. For awhile there, it felt like Brian St. Pierre had been the Steelers third-string quarterback for decades. His name was hard to miss on the Steelers sideline, but you rarely saw it anywhere else. He'll be playing a similar role on the Arizona sideline this time.

Sean Morey. Morey was a Bill Cowher guy: a really special, special-teams player and OK back-up wide receiver. But when Cowher went, so did Morey.

Jerame Tuman. A formerly prototypical Steelers tight end. He can block like a wall and catch a pass when he needs to.

Clark Haggans. Was a Steelers linebacker for eight years before joining the Cards. Don't expect see him Sunday, however: Haggans is on injured reserve.

Larry Fitzgerald. The superstar receiver may have grown up in Minnesota, but he became a star at the University of Pittsburgh before leaving early to enter the NFL draft. He is likely the former 'Burgher that Steelers fans won't want to see on Sunday.

Reggie Wells. A South Park native, Wells, an offensive lineman, played his college ball at Clarion before being drafted by the Cards in 2003. He is part of an offensive line credited with providing protection for Warner and spurring the Cardinals running game resurgence.

A look at the most maddening Steelers fight song ever.

On Super Bowl Sunday, arts groups head for the sidelines.

The mayoral wager: What happens when politicians put their pride on the line.

The Super Bowl may be the last cultural phenomenon we still have in common.

What do people who don't like football do all day?