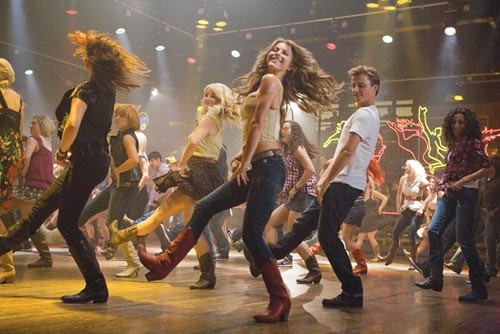 On its release, I found 1984's Footloose perplexing -- you can outlaw dancing? -- but this remake from Craig Brewer will really challenge what you know of the world and how kids (and adults) act in 2011. Suffice it to say, there is still a town in these here United States where dancing among high school students is a very, very serious criminal act. Until, of course, the free-thinking kid from Boston shows up, declaring his wildness by blasting Quiet Riot from a beat-up VW Bug (isn't this the reverse of cool?). The Bad Boy from Beantown (Kenny Wormald) hooks up with the preacher's daughter, a wild child who really just wants to be good. (What she needs is a good waltz.) Together, they fight for their right to dance.

It's a sing-along morality play about how adolescence is fraught with sexuality and challenging authority. But to follow any of that, you have to pretend there is someplace where teens cheerfully booze, screw and wreck school buses for fun, but must dance in secret. (The cool kids have a boxcar hideaway filled with cassette tapes.)

Still, I suppose people aren't coming out for the plot, but rather to see attractive kids dance up a storm. So we get a hip-hop grind session at the drive-in; some pre-school girls swiveling their hips to "Let's Hear It For the Boy"; a shit-howdy trip to the big city for some country line-dancing (!!!); and Wormald's big solo blowout. The Yankee boy simply tears up a cotton gin, with a routine that is equal parts Rocky training montage, Billy Elliott and Jersey Shore beat-up-the-beat session. Footloose is head-scratching cheesiness, but apparently there's no holding back the dancing fools. Starts Fri., Oct. 14.