“There is so much history and pride that is related to the sports teams, that we want to have a little bit of that reflected in the airport" 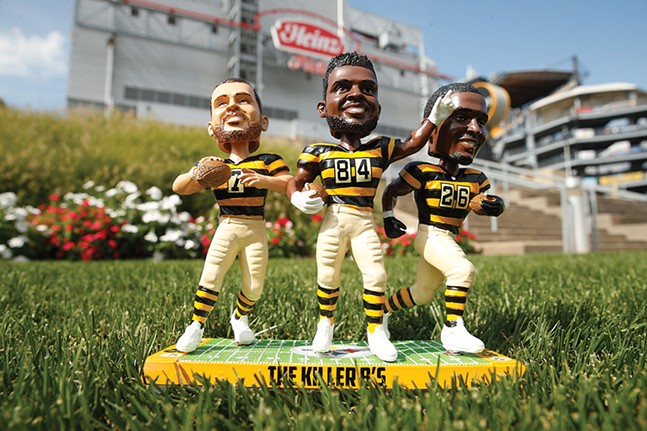 CP Photo: Jared Wickerham
Fans fly in from all over the country to catch these Killer B's at Heinz Field

The heart of Steelers Nation is not Heinz Field. It’s not inside a Monessen home where a banner reading “This is Steelers Country” acts as a curtain. It is not in some West Coast Steelers-themed restaurant where Pittsburgh expats gather to put French fries on salads.

Every weekend during fall, the airport is covered in black and gold. Alyson Walls, of the Allegheny County Airport Authority, says the airport gets so crowded on Mondays following Steelers home games, the authority advises passengers to arrive earlier to accommodate for longer wait times.

Fans fill the terminals, shop at the stores, eat at airport restaurants, and drink at the bars. From September through December, PIT might as well call itself “Steelers Station.”

Starting in the 1970s, Pittsburghers started leaving the region in droves. Thousands resettled in areas with stronger economies. But their football allegiance never wavered, their children were raised Steelers fans, and now generations of people with ties to Pittsburgh make a pilgrimage of returning to “the town with the great football team.”

Research published in Sports Business Journal shows Steelers fans live an average of 466 miles from Heinz Field. This number is surprisingly high considering there are 12 other NFL teams within that radius. Other teams with fans living farther away, on average, are geographically isolated like the Seahawks (Seattle), Cardinals (Arizona), and Patriots (New England).

The airport wants to highlight the intense love fans have for the Steelers and other Pittsburgh sports teams. “There is so much history and pride that is related to the sports teams, that we want to have a little a bit of that reflected in the airport,” Walls says.

The “Black and Gold” store inside the airport has its busiest days during Steelers weekends. When local teams make the playoffs, the airport adds pop-up stores selling sports gear. Walls says those pop-ups can’t “keep that stuff on the shelves fast enough.”

The airport also pays homage to the Steelers with the “Immaculate Reception” statue of Franco Harris. Walls says it’s the most photographed spot in the airport.

And it’s not just Steelers faithful arriving to Pittsburgh; the opposing holds true, too. Huge volumes of Steelers fans travel from Pittsburgh to stadiums across the country. The Steelers regularly rate amongst the NFL’s top road draws, and their fans have famously filled large chunks of stadiums in Cincinnati, Washington, Dallas, San Diego, Denver, Charlotte, Miami, and for recent Super Bowl appearances by the team.

And when those fans return to Pittsburgh, Walls says the airport makes sure they know they’re home.

“We see a lot of comments on social media,” says Walls. “They know they are in Pittsburgh because they see Steelers and Pittsburgh culture represented at the airport.”