Don't forget the sprinkles! Ryan Deto outside Punk’s Ice Cream Shoppe
It’s been hot, really hot. Over the last two weeks, the Pittsburgh region has seen several days over 90 degrees, with only a few days of rain to cool things off. This kind of weather is perfect for ice cream.

With more hot days coming this week and two more months of summer left to go this year, Pittsburghers still have lots of time left to run to their nearest ice cream stand, shop, or truck. Pittsburgh City Paper encourages ice cream fans to get those frosty treats, but why not try some flavors beyond the usual vanilla or chocolate? Ice cream shops in the region offer some truly unique tastes.

Here are five shops in the Greater Pittsburgh area that are worth a sample, or a whole dang cone. 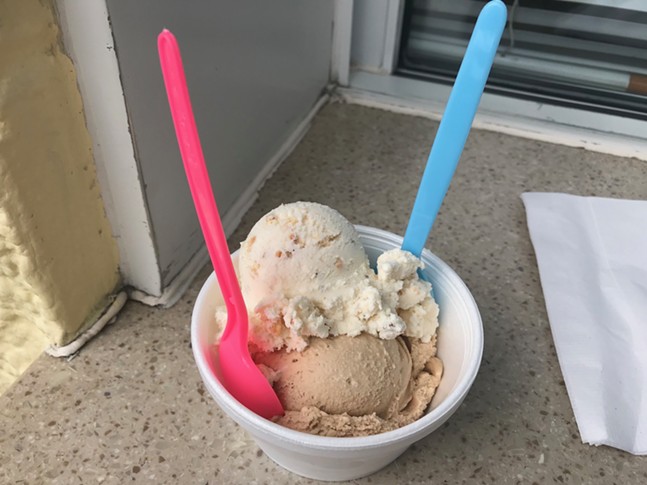 1316 Poplar St., West End
Pittsburghers love pizzelles, the waffle-like Italian cookies that are especially popular at Christmastime. At Antney’s in Pittsburgh's West End, pizzelle fans are in for a treat with this spectacular flavor. The base tastes like a sweet cream, and is filled with chunks of pizzelle cookies and dotted with anise seeds. The creamy ice cream with vanilla cookies is rich and delicious, and an herbal anise seed really balances out everything. Get it while you can. Antney’s has over a dozen flavors and they rotate often.

2056 Broadway Ave., Beechview
A paleteria is the Spanish name for a popsicle shop, and Alquisiras Paleteria in Beechview is one of the only shops like it in Pittsburgh. There are several flavors of the Mexican-style popsicles, but the Arroz, aka rice, flavor is rich and creamy, as well as refreshing. It's like a perfect frozen version of horchata, a rice-milk beverage with a touch of cinnamon and nutmeg. And the Alquisiras version has some bits of cooked rice inside for some nice texture.

Multiple locations, including Lawrenceville, Shadyside, and Downtown
Multiple locations of this popular Pittsburgh chain offer this refreshing and citrusy ice cream flavor. Yuzu is a member of the citrus family that is a cross between a mandarin orange and an Ichang papeda, a sour citrus fruit native to China. Millie’s Lemon Yuzu ice cream is tart and sweet, and described as “lickable scoopable sunshine.” Try it at all five Millie’s locations located throughout Southwestern Pennsylvania.

Corner of Virginia Avenue and Route 65 in Baden, PA 15005
Punk’s on Route 65 in Beaver County is well-known for specializing in soft serve. Every week, the shop rotates new unique flavors into one of its soft-serve machines, and this week’s combo is perfect for hot days. Orange-Pineapple and Coconut combines and transports ice cream fans to a tropical getaway. Enjoy your cone or bowl on a bench overlooking the Ohio River.

East End Food Co-op, 7516 Meade St., Point Breeze
This popular Southern dessert gets the frozen treatment from popular, local ice-cream sandwich makers Leona’s. Strawberry Pretzel Salad is not a salad at all but instead, a great combination of tart jelly, a creamy center, and a salty-crunchy pretzel crust. Leona’s turned this “salad” into one of its mammoth ice-cream sandwiches in honor of East End Food Co-op’s 40th anniversary. Stop by the health-food grocer to grab a Strawberry Pretzel Salad ice-cream sandwich, made with Leona's signature lactose-free ice cream.

Nominate your favorite shop for Best Ice Cream in this year's Best of Pittsburgh Readers' Poll before before July 22!