Five realities Donald Trump has shown us about America 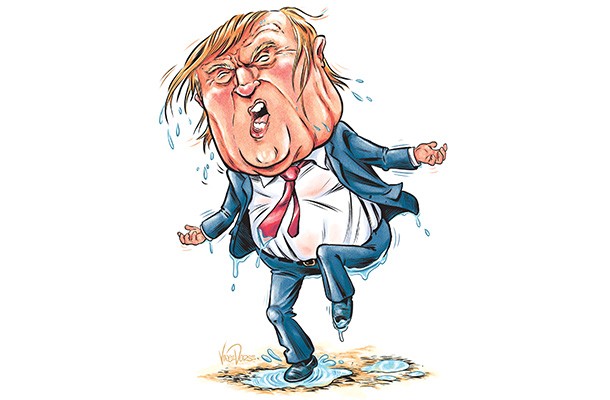 If you’re not a Donald Trump supporter, which I assume includes most of you reading, I can pretty much guess how you feel about him. He’s arrogant, clueless, entitled, racist, sexist, anti-gay, anti-immigrant, pro-wall, anti-facts and, because he has a whole lot of support, extremely dangerous. As it happens, this also pretty much sums up my feelings on the man. Trump the candidate, much like Trump the reality-TV star, was so absurd that we couldn’t even take him seriously… until, that is, we had to. Trump is leading the Republican delegate count and the Republican National Convention looks to be a shootout to see who will get the nomination.

But regardless of whether or not Trump gets the nomination and regardless of how much he disgusts you as a human being, Donald Trump has been good for America. Why? Because he has shown us the reality of the place and time that we live in. He has given us valuable information to help us evolve as a species. Donald Trump’s campaign has been good for this country, and if we learn from the lessons he’s taught us (we made you a list below), we can “Make America Great Again,” just like he promises. Just don’t elect him president; that would be a colossal shit show.

5. Hatred Has Been Legitimized

Before Donald Trump, you thought your conservative neighbor, who talked about what was wrong with America, was probably a racist, but you weren’t sure (or at least you wanted to give him the benefit of the doubt). But once he put that “Trump for President” sign in his yard, he started getting ballsy. He started speaking “the truth,” as Donald Trump tells it. America has big problems and they are only going to be fixed if we build walls to keep out the undesirables and stop any Muslim from entering the country. “We have to get to the bottom of this,” Trump told CNN’s Anderson Cooper last month about the “hatred” that Muslims have for Americans. A February poll from NBC shows that 67 percent of Donald Trump supporters are buying what he’s selling. After all, this guy is leading in the polls after he was endorsed by a former Grand Wizard of the Ku Klux Klan and later refused to disavow the endorsement. Folks who normally save their racism and xenophobia for the dinner table or Sunday-morning church services are getting invigorated. Disagree with them? Profess your hippie beliefs at a Trump rally and they’re going to sock you right in the face. Trump has emboldened a new generation of idiots to say and do whatever they please regardless of who it hurts or offends.

4. The Truth Is Overrated

There was a time when Americans who believed in conspiracy theories like “9/11 was a government operation” or “Obama isn’t a citizen” were pretty quickly labeled as “off their rockers,” and we moved on. But Trump has proven the old adage true: It’s not a lie if you believe. Donald Trump appeals to his voters because he either believes, or is willing to pretend to believe in, the cockamamie conspiracies and hate-based lies that the right relies on to fuel its mission. Politico reporters watched 4.6 hours of Trump speeches and found that he lied on average once every five minutes. Worse than the lying is that even when the lies are debunked, his supporters still believe him. They can’t be reasoned with and that’s a frightening thought for the future. The government plans to bring in 10,000 Syrian refugees; Trump says it’s 250,000 and now that’s the new truth among his supporters. Trump has also claimed not to have hurled insults and misogynistic slurs at women, even though the incidents are documented. But Trump stands firm on his bullshit pulpit, denies it all and his supporters believe it. Apparently you can unring a bell.

3. Ronald Reagan and George W. Bush Were Lincoln and Truman compared to Trump

I never thought I would ever have kind words to say about the two worst presidents of my lifetime, but compared to Trump, it makes me long for the salad days of these two yahoos. While I disagreed with pretty much everything these two guys did as president, I wasn’t afraid of the world coming apart under their leadership. OK, I did think that when Bush got a second term and we all thought Reagan was going to incinerate the whole planet, but we’re still standing. Trump is a different kind of animal. He’s driven by ego and a desire to rule the world. But there’s a different feeling with Trump. He likes to tell us that he’s not a politician, but for some reason that doesn’t make me worry less. He has no ability to compromise. He has no ability to listen to reason. I can sum up his leadership style in two words: “fuck you.”

2. Trump’s Support Has Little to Do With Trump

It hasn’t taken me long to come to this conclusion. Most voters, especially white voters who feel put-upon by what they see as a PC culture that promotes reverse racism and government handouts over hard work, don’t really identify with Trump. He’s a real-estate mogul, reality-TV star and prototypical rich asshole. Most of his supporters don’t identify with that. But they identify with the rhetoric and the alternate reality that Trump’s created where they (white voters) are the ones receiving the raw deal in this country. Voters who don’t understand why they can’t say the words “colored,” “ragheads” and “Oriental” anymore. They don’t know why they can’t compliment a woman’s ass in the workplace, or call her sweetheart, or yell about her legs on the streets. Donald Trump plays on all of these ridiculous angers and that has made him popular. But I have a feeling that if a talking duck in a nice suit spouted the same rhetoric, he’d be winning the nomination, too.

1. The Republican Party Is Dead

Regardless of who eventually wins the GOP nomination, Donald Trump has done what millions of liberals have failed to do over the years — destroy the Republican Party. The party has been fractured for years since the emergence of the Tea Party. The far right wing of the party has gained a lot of traction over the past several years, but it has been growing quieter. And if Trump goes into the GOP convention with an overwhelming delegate count but doesn’t get the nomination, it will be anarchy.