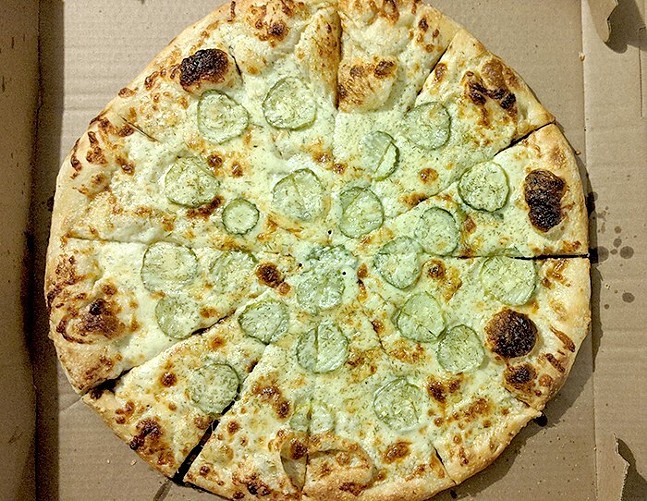 CP photo: Maggie Weaver
Pickle pizza at Spak Brothers
Pittsburgh isn’t necessarily known for its pizza, but we do have a number of places in the city where you can get a pretty good slice. Whether it’s the ongoing Mineo’s vs. Aiello’s debate, or the cold cheese on a hot slice debacle, Pittsburgh’s pizza is a hot topic with locals. But if you suffer from food allergies or are vegan, you might indulge in a slice at your own peril. Now you don’t have to - here are a few places in Pittsburgh where you can get a vegan (or gluten-free) slice.

Spak Brothers
5107 Penn Ave., Garfield. spakbrothers.com
This list would be incomplete without Spak Brothers. For years they’ve been selling a great vegan pizza to the Pittsburgh area. Spak has a wide variety of vegan pizza regulars on the menu from a classic Margherita with vegan cheese to a Buffalo seitan pizza with vegan Buffalo sauce and a side of vegan ranch. Spak can also make a vegan version of its wildly popular pickle pizza. Gluten-free? Spak has you covered.

Pizzeria Davide
2551 Penn Ave. Rear, Strip District. pizzeriadavide.com
Pizzeria Davide has a simple vegan pizza made with dough, sauce, garlic, oregano, and olive oil. They also have a build-your-own pizza option so you can order a slice sans cheese and enjoy it with whatever toppings you like. Have your pizza plain or with a side of vegan ranch. Davide also has vegan garlic knots, seitan wings, and a selection of seitan sandwiches that can be made vegan and dairy-free.

Pastoli’s Pizza
1900 Murray Ave., Squirrel Hill. pastolis.menu
Pastoli’s has its own selection of vegan specialty pizzas. They carry a Classic White Pizza with garlic sauce, fresh tomatoes, diced onions, and fresh basil. The Vegan BBQ Chicken Pizza is topped with vegan cheese and fries. Like many pizza places, Pastoli’s also has a selection of vegan hoagies ranging from Cajun "chicken" to pulled "pork."

Mandy’s Pizza
512 Perry Hwy, North Hills. mandyspizza.com
Mandy’s Pizza has three specific menus for allergen and specialty diet specifications: Gluten-Free, Veganated, and Allergen Friendly. Their Veganated menu has seven specialty pizzas to choose from, including a pulled "pork" pizza with homemade pulled “pork” and vegan barbeque sauce. Three of the pizzas also come with a Pittsburgh signature, fries on top. If you’re not into vegan meat substitutes, try the classic white pizza with vegan mozzarella and a bruschetta mix. You can also get a traditional pizza or a Sicilian-style pizza with three toppings. Mandy’s also has seven vegan calzones on their Veganated menu.

Country Style Pizza
536 Dewey Ave., Bridgeville. countrystylepizza.net
Country Style Pizza has a vegan menu that is pretty extensive. They use cheese made by Daiya, a fairly popular brand among vegans and people with dairy allergies, as their dairy substitute. You can go traditional with a red or white sauce pizza, with toppings like mushrooms, jalapeno, plant-based pepperoni, and more. If you’re feeling a bit more adventurous, try the vegan pierogi pizza or the pickle pizza. Pair it with the vegan breadsticks topped with Daiya mozzarella and cheddar with a side of marinara. They even have vegan cinnamon breadsticks made with vegan butter. 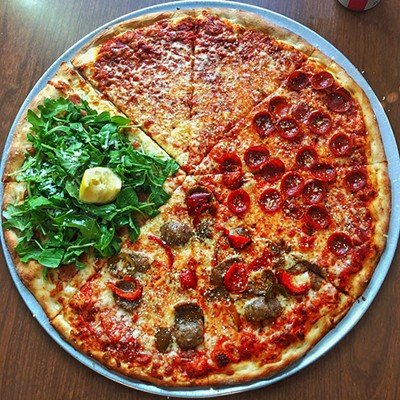