Five local art projects that thought outside the box in 2014

Pittsburgh's art scene keeps growing in venues, events and variety, including performances, pop-ups, evolving exhibits, crowdsourcing, interactivity, etc. No one can catch it all, so consider these outside-the-box examples as representative and not the result of a comprehensive survey.

I preferred the more focused original vision for the Pittsburgh Biennial as showcasing only artists living and working in Pittsburgh, given their perpetual underdog status at home and the fact that there's no shortage of talent. That vision held for several Biennials and through several curators, but no more. Still, there were lots of Pittsburgh artists included and plenty that was ambitious, adventuresome and occasionally unexpected — none more so than Anna Mikolay's geometric wall painting at the Pittsburgh Center for the Art's iteration of the Biennial (Aug. 15-Nov. 2). Loitering outside of the galleries proper, Mikolay's use of rectilinear shapes and a few bright colors transformed the somewhat ornate hallway into a three-dimensional canvas. Make that four-dimensional, because the thrilling part was that as you moved around the space, it was continually reconfigured, not unlike moving around in "the real world." 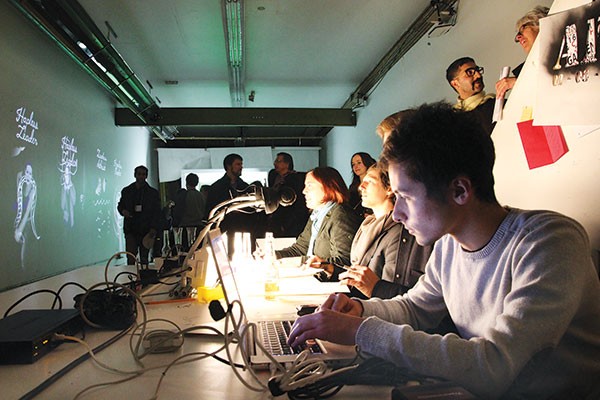 Once you'd been to St. Anthony's Chapel to see the self-described "world's largest collection of relics outside of the Vatican," there wasn't a lot of reason to head back up Troy Hill. Until, that is, neighborhood resident and art collector Evan Mirapaul commissioned German artist Thorsten Brinkmann to transform an abandoned house into La Hütte Royal, a hybrid installation that includes plenty of artworks, arrangements that might or might not be artworks exactly but are part of a larger artwork, plus an optional, pleasurably disorienting crawling journey through the house for any viewer who is game. Playful and possibly profound, in a class of its own. (The exhibit is ongoing, with visitations by appointment at lahuetteroyal@gmail.com.)

Ali Momeni and Jenny Schmid's Drawing Gutless Warrior, at Artists Image Resource on March 2, was presented in conjunction with Carnegie Mellon University's DRAW 2014 Symposium. Momeni and Schmid's drawing-and-projection performance was a short-term stand-alone interactive artwork. Technologically based and participatory, every element not only worked together, but it was transparent enough to be grasped. Audience members were invited to don one of the provided masks, perform a brief action (a spin, a dance step, an unexpected movement) that was videotaped and projected onto the wall along with others. The mask left people looser than late-night karaoke, and a changing panel of artists did spontaneous sketches that were added to the projected images along with labels such as "Worthless Billionaire." It was a fine example of what is now called a platform — not quite a performance by an artist and not quite an exhibit. Rather, this artist-created, flexible system solicited audience input and yielded changing output. Observe, participate, stay a minute or an hour, it was up to you. Like it or not — and the audience did indeed like it — this is where at least some art's been headed.

For the Birds occupied the National Aviary's FliteZone Theater on May 5 and 11. A cross between a trained-animal show and a Dada performance, "For the Birds" was the brainchild of Tucker Marder and Daniel Allende, who enlisted lots of help from friends, acquaintances and Aviary staff, including skilled bird trainers, not to mention a macaw, a hawk, a snowy owl and vultures that flew freely within the theater. Marder and Allende represent a growing contingent of artists who are not performance artists as such but produce performances as a part of their art practice, while also making things. "For the Birds" featured outlandish costumes, percussion and movement, and birds doing bird tricks, all somehow tied together into what felt to me like an alien culture.

Photo courtesy of Laila Archuleta
Tucker Marder and Daniel Allende's For the Birds, at the National Aviary

The Cultural District was already looking pretty snazzy with public art, spruced up façades, dramatic uplighting and maturing trees. Wood Street Galleries' Murray Horne (who, among other things, started the Pittsburgh Biennial) decided to do something about the lack of enough things to lock a bike to by commissioning artists to do something creative in a permanent, very public art form. Generously funded by the Colcom Foundation (disclosure: I was a member of the unpaid selection panel), the bike racks, permanently installed throughout the Cultural District, are clever, attractive and useful, and celebrate local artists while putting some money in their pockets. From what I hear, there may be more bike racks on the way, and more of a lot of this other stuff, too. Cheers to that, even if I won't manage to see all of it.