He’s only done it once in his career and it wasn’t even his MVP season. Early last year, Cutch struggled with a knee injury and never really looked right, although he eventually did hit 23 bombs. He’s stronger, he’s had a strong spring, and his swing gets closer to perfect every day.

The Bat Signal will fly over Pittsburgh skies by July

It’s no secret that the back of the Pirates rotation is a little sketchy. By the halfway point, the Pirates will need a veteran to go along with the call-up of Jameson Taillon. A.J. Burnett will be that guy. He’s Batman, after all; we all know it. Batman always comes back when the city needs him. After The Dark Knight, Batman retired, the city went to shit and he had to come back in The Dark Knight Rises. This season will be A.J. Burnett’s Dark Knight Rises. 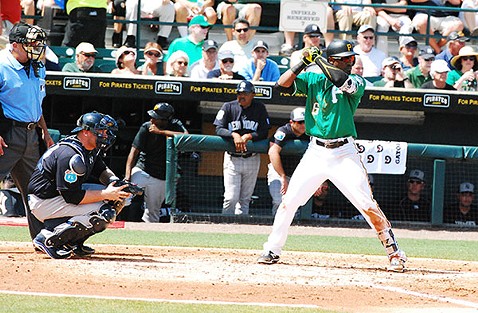 Starling Marte will join the 30-30 club

Las year, the Pirates leftfielder really started to find his power stroke. He hit 19 home runs and stole 30 bases (for the third consecutive year). The power will fully develop this season as he hits his prime, and he looked really fast this spring. If he hits his stride, 30 homers and 30 stolen bases could be a low estimate.

Juan Nicasio will win between 15-20 games

While the argument continues about whether the former Colorado Rockies pitcher will make the rotation, we believe that’s a no-brainer. He’s already earned that this spring. His ERA numbers are inflated because of all the years he pitched in home-run-happy Coors Field. Pirates pitching coach Ray Searage knows how to get the best out of good pitchers and even mediocre hurlers. Nicasio was somewhere in the middle of those two when Searage got a hold of him, and he’s going to have a big season. 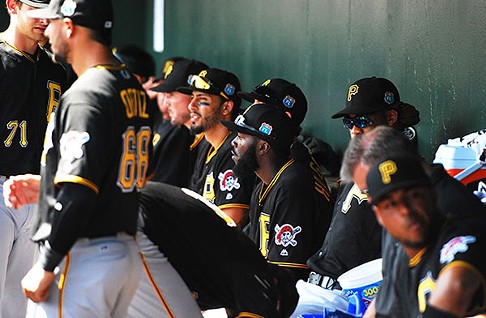 Photo by Charlie Deitch
Inside the Pirates dugout

The Pirates will win the NL Central with 97 wins

As noted elsewhere in this issue, the Pirates are being written off as third-place finishers behind Chicago and St. Louis this year. That’s a mistake. The aging Cardinals will finally fall off their perch for a solid third-place finish, and the Cubs’ growing pains will keep them in second with 94 wins. Age- and experience-wise, the Pirates are in the sweet spot. The veterans aren’t too old and the young guys aren’t too young. They’ve won big ballgames the past two years and are ready to move forward.