"On the first album, it was all about Fitz's massive old organ and his old, out-of-tune piano."

FITZ AND THE TANTRUMS with MAX FROST, HOLYCHILD 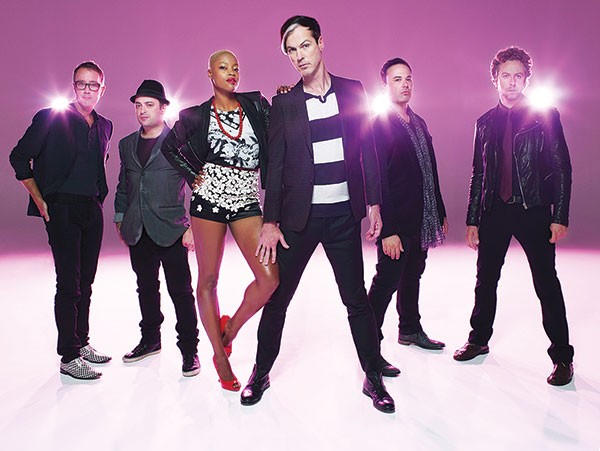 They broke down and got a guitar: Fitz and the Tantrums

Long before he joined Fitz and the Tantrums, keyboardist Jeremy Ruzumna found himself in front of a college music class, with no idea what to say. A producer at the time, Ruzumna couldn't even read music, but his visit went surprisingly well. "When you talk to people who are younger, and just coming up, you realize you know more than you think you do," he says. "There's always something you can teach people."

That knowledge — along with "a pretty formidable collection of vintage synthesizers"— has helped take Fitz and the Tantrums from buzz to critical acclaim. (Ellen Degeneres dancing to their song "The Walker" in an Oscar commercial didn't hurt, either.) The band is festival-hopping and headlining tours, impressing funk purists and preteens alike. Last year was undoubtedly the musicians' best thus far, all because they decided to switch gears.

"On the first album, it was all about Fitz's massive old organ and his old, out-of-tune piano," Ruzumna explains, referring to frontman Michael Fitzpatrick. "On this new record, we wanted to take our sound somewhere different. We wanted to do what sounded good to us, and hopefully other people would be into it. I was able to take the songs home at night and just lace them with tons of different weird and obscure keyboards. We used everything on this album, from old vintage synthesizers to modern laptop synthesizers. Just mixed them all together to taste."

How many synthesizers, exactly? Over 30. More Than Just a Dream takes the edge off the neo-soul sound of the band's debut, Pickin' Up the Pieces. What's left is a triumph of pop — with all the artistry of the earlier efforts and hooks that are infinitely danceable. The band also broke its own ban on guitars — saxophonist James King learned to play for "Spark." Far from dumbing down the sound, Fitz and the Tantrums have made good music popular.

The live show is a must-see, Ruzumna says, because of those two singers. "Fitz and Noelle work really hard every show to connect with everyone in the audience," he says. "I think that's one of our secret weapons, too. There's a true sincerity there."