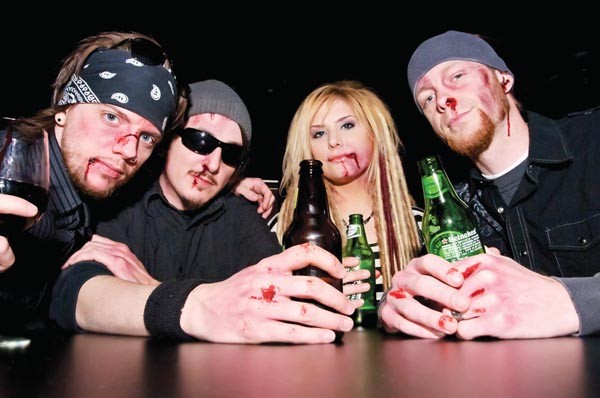 Takin' it outside: Fist Fight in the Parking Lot

FIST FIGHT IN THE PARKING LOT

If you've reached that point where you're ready to fight someone in a parking lot, you've abandoned some pretense, at the very least. And for some people — those who on principle disapprove of Mastodon's increasingly slick sound, or who find Priestess too poppy — dropping a little pretense is what it will take to appreciate Fist Fight in the Parking Lot's catchy, radio-ready metal.

"This is more attainable, perhaps, than really heavy stuff that tries to have its own niche, and tries to keep people out of it," says singer Abby Krizner. "This is just metal enough for people who like doom bands, and there's enough heavy rock stuff for people who like bands like Queens of the Stone Age."

Composed of members of Mojo Filter (drummer Chris Ruane, bassist Johnnie Metal and guitarist Jason Sichi) and Motorpsychos (Krizner), the band was born about two years ago, when Mojo Filter's singer didn't appear for a show, and Krizner jumped onstage to fill in.

Things swiftly moved forward. "At our first practice, Jason just started riffing, and it turned into a song very quickly," Krizner remembers. "We were exchanging smiles around the room and just knew we were going to have a fruitful relationship with each other."

At this point, though, you're more likely to have heard Krizner's speaking voice, thanks to her job as music director and DJ at 105.9 The X. Frankly, Fist Fight in the Parking Lot is exactly the kind of band that should be played on the X, but so far she's made a point to keep the two separate.

"I've always left my bands out of the conversation," she says. "That being said," she adds with a laugh, "I'll be on air and I'll get a call from someone saying, ‘Play Fist Fight in the Parking Lot!'"