First weekend of WPIAL football championships is worth suffering through a cold, wet Pittsburgh Saturday

It’s rare to have fun in wet socks 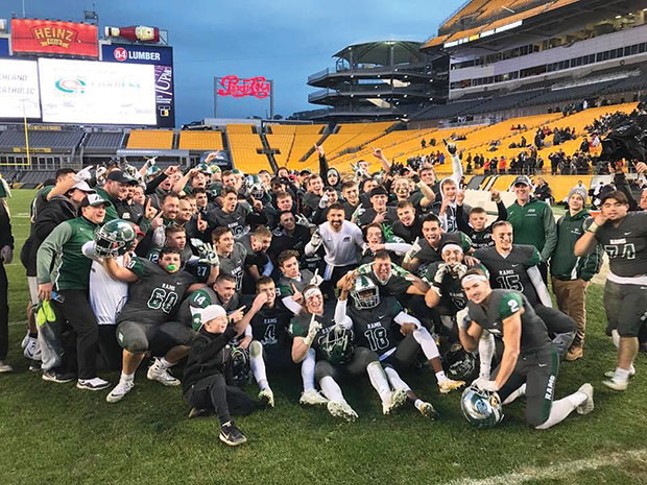 The worst kind of cold is a wet cold. The kind of uncomfortable weather where you wish the temperature would just drop a few degrees so it would snow instead of rain. Everything is damp, the rain won’t stop, and once your socks are wet, the day is ruined. It’s rare to have fun in wet socks.

That is, unless your team is playing for a WPIAL football championship at Heinz Field. Hardcore fans sat in the miserable weather, and half of them went home happy. It’s our local high school Super Bowl, with all the winners moving on to the state brackets.

In the 6A game there were no surprises. The Pine-Richland Rams continued an unblemished season with a methodical beat-down of the Central Catholic Vikings, 42-7. Phil Jurkovec continued to look like a much older brother playing all-time QB against his younger brother’s friends and trying real hard to win. Jurkovec ran for 93 yards and passed for 263 as the Rams made a respected powerhouse school look average. Next up for the Rams are the State College Little Lions. Stan Belinda’s alma mater has never seen an offense that averages 49 points a game. In fact, credit Central Catholic for holding the Rams to 42.

In the 5A game, the Penn-Trafford Warriors were hot and looking for the school’s first WPIAL title. The Gateway Gators were there to spoil the party. Gateway jumped out to an early 21-7 lead and then put up the prevent defense. Gateway was able to fend off Penn-Trafford, which fought and clawed its way to within five points but came up short. Gateway plays the Hollidaysburg Golden Tigers in the next round. Hollidaysburg is known only for its production of the Slinky — the old Christmas present that is fun for about three minutes, then you never play with it again. Those Slinky-loving Blair Countians are about to get Gatored.

Thomas Jefferson scored the hat trick in the 4A finals. TJ shut down Montour, the school that produced Batman and Birdman, Michael Keaton. Shane Stump threw two touchdowns as Thomas Jefferson won its third consecutive WPIAL title with a 27-0 statement win. TJ will try to win its fourth state title since 2004, but standing in its way is arch nemesis Erie Cathedral Prep. ECP has knocked TJ out of the playoffs the past two years.

But the best story of the afternoon was written by the Quaker Valley Quakers. It’s a high school that started in 1955 and has had less success at football than Jim Belushi has had at acting. In 62 seasons, the Quakers have made the playoffs just six times. Nobody even wanted to coach this team at the beginning of the season. In August, the track coach took over the team, probably as a way to make a couple extra bucks. Reaching the championship was an astounding feat for the program. But things got more interesting when it became obvious who the Quakers would be playing.

The Aliquippa Quips are the Pittsburgh Steelers, New York Yankees and Boston Celtics of WPIAL high school football. The Quips have claimed 16 WPIAL titles; nobody has more. As expected, the Quips defense showed up and allowed QV only 55 yards. The Quakers offense couldn’t make it into the Aliquippa red zone all afternoon. Fortunately for the Quakers, they have a pretty good defense, too. The defense scored two points on a safety, forced five turnovers and held Aliquippa scoreless the rest of the game for a 2-0 victory. Quaker Valley awaits the winner of Sharon vs. Forest Hills as this improbable quest continues.

An exciting day of football to be sure, but it’s not over yet. This weekend at Robert Morris, the last two division championships will be decided. In 2A, the Steel Valley Ironmen put their 26-game winning streak on the line against the Washington Prexies. The 1A game features Imani Christian, which sounds like a high-end clothing line, playing the Jeannette Jayhawks. The weather will probably be cold again, but the seats will be cheap. Let the Quakers be an inspiration to everybody. That sentence probably hasn’t been said since William Pitt.