“The shelters have plenty of great dogs.”

Peduto and his girlfriend, Caitlin Lasky, adopted the terrier from the Humane Society of Western Pennsylvania on April 1. Since that time, they say, the dog has been a ray of sunshine in their lives.

“We’re both totally happier,” says Lasky. “I’m so in love with animals in general, but she’s just made us both extremely happier.”

“I’m stressed out quite a bit,” says Peduto. “But she’s such a mellow dog, it’s hard to be stressed out around her.”

As a result of their experience, Peduto has become a strong advocate for pet adoption. At the several animal shelters throughout the Pittsburgh area, there are thousands of dogs, cats, birds, rabbits and reptiles in need of good homes.

“The shelters have plenty of great dogs,” says Peduto. “If you’re looking for a specific breed before you decide to purchase through a breeder, look, go to the different shelters. If you’re like us, you’ll find a great dog looking for great people.”

The American Society for the Prevention of Cruelty to Animals estimates that five in 10 dogs and seven in 10 cats in animal shelters are euthanized because there are not enough people to adopt them. ASPCA estimates the number of stray cats throughout the country to be around 70 million alone.

The cost of adopting a dog or other pet can be affordable. Peduto and Lasky adopted Lilly from the Humane Society on the North Side for $155, which included getting the dog spayed, a health check-up, microchip identification, shots and de-worming and flea treatments. 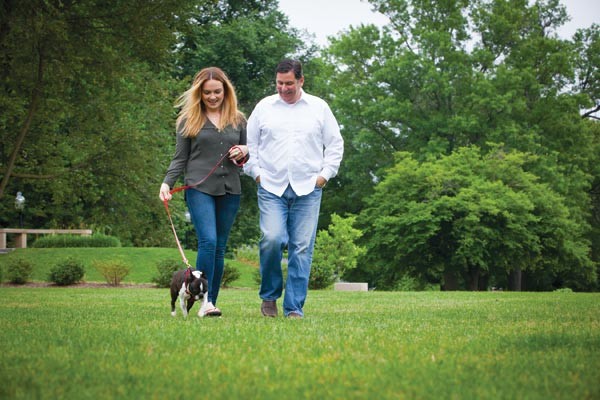 However, new pet parents should also be prepared for a few surprises. Lilly was brought to the Humane Society by an elderly woman who could no longer take care of her. The terrier suffers from an autoimmune problem that prevents her eyes from producing tears.

“When we got Lilly she had ulcers on her eyes,” says Lasky. “She couldn’t see very well. We have to put four drops in her eyes three times a day, and she had to see an ophthalmologist, and it cost us more than we were expecting but she’s totally worth it.”

Lasky and Peduto have nursed the 3-year-old Lilly back to health and have seen an improvement in her demeanor as well.

“When we got her, she couldn’t walk up or down stairs,” says Peduto. “She used to be very tentative. Now she just runs up and down them. Her vision’s not completely back, and it won’t come back, but she’s better.”

Adopting a pet can be a difficult process depending on the shelter a person visits. Before finding Lilly, Peduto and Lasky were working with a Boston terrier rescue group that required them to give references, as do some shelters. Some shelters also do home inspections and check-out the family’s veterinarian.

“I grew up with adopted dogs,” says Lasky. “Some places are so difficult that I think it can deter people from adopting, but the Humane Society is really reasonable. You can tell they really cared, but they didn’t make it impossible.”

Due to Lilly’s relaxed temperament, Lasky and Peduto are interested in taking her to visit local nursing homes or training her to be a therapy dog.

“We’d like to make her a therapy dog, she’s really chill with kids and older adults,” says Lasky. “You have to go through a lot of training, but there are also places you can take dogs, like nursing homes.”

For now, they’re soaking up the positive impact the Boston terrier has had on their life, and spreading the word about pet adoption in the hopes other Pittsburghers will do the same.

“If you want a dog immediately, go down to the shelter and there are plenty of dogs looking for a home,” says Peduto. “If you’re looking for a specific type or breed, give it time and that dog will come to you.”

“If you’re on the fence about it and you have the time and home where you’re able to do it, definitely do it,” adds Lasky. “It’s totally worth it.”