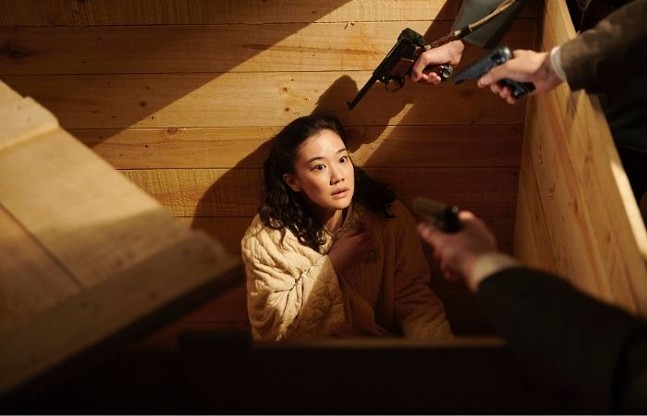 Picture: Kino Lorber Studios
Satoko gets more than she bargained for in Kiyoshi Kurosawa’s latest Wife of A Spy.
Asian and diasporic film and media have grown increasingly popular in the U.S., from the proliferation of K-dramas on Netflix to major award recognitions for films such as Minari, The Farewell, and Parasite. But there is more to Asia than East Asia, and SCREENSHOT: Asia Film Festival seeks to celebrate the wide range of contemporary Asian and diasporic films.

The first annual SCREENSHOT: Asia Film Festival will run Wed., Oct. 6-Sun., Oct. 10. The festival will show nine films and three short films representative of Asia, the Pacific Islands, and the diaspora. Screenings will occur mostly on and around Pitt’s campus, with the closing ceremony at the Carnegie Museum of Art.

“Since the previous film festival wasn't continuing, we thought it would be really exciting to bring it to Pitt,” says Lynn Kawaratani, assistant director of partnerships and programming at the Asian Studies Center and co-chair of the film festival. “This way, it will outlast us, hopefully.”

SCREENSHOT: Asia is a collaboration between the University of Pittsburgh’s Asian Studies Center and Media Studies Program. It began in 2019 and includes other programming, such as Silent Asia, a silent film and performance event that pairs older films with contemporary artists. The name Screenshot is a reference both to traditional forms of Asian media, such as shadow plays, as well as modern technology people use to view media, such as phones and laptops.

“We wanted to tap into the kind of myriad of different technologies, not just film, that influence Asian media today, right? So we wanted to think of it in a really holistic way as, 'What does contemporary Asian media look like?'” says Kirsten Strayer, programming coordinator for Film and Media Studies and the Asian Studies Center and co-chair of the film festival.

The festival will show films that delve into the mystical, such as Khyentse Norbu’s 2019 Nepalese film Looking for a Lady with Fangs and a Moustache, as well as thrillers that pay homage to classic filmmakers, such as Kiyoshi Kurosawa’s 2021 Japanese film Wife of a Spy. The films selected will grapple with death and murder, as well as sexual assault and corruption. A full list is available on SCREENSHOT Asia’s website.

Strayer and Kawaratani plan to limit future festivals to films from the previous year. But, for this year’s festival, selections go back to 2019 to give people a chance to see films that did not get full theatrical releases due to the pandemic since watching a film as part of an in-person community is an experience many people have been missing for years.

To make sure people feel comfortable attending, in-person screenings will be limited to 50% capacity. Masks are required at indoor venues, and vaccinations are expected. Virtual screenings are also available to select films, including Wife of a Spy and Gaurav Madan’s 2021 Indian film 12x12 (Barah by Barah). The latter will also feature a guest conversation between the co-writer and producer Sunny Lahiri and Pitt associate professor of English and film studies Neepa Majumdar.

“We want to think about why you come out for the experience, and part of it is just like, 'Hey, there's this amazing film that maybe didn't make the rounds [in theaters],'” says Strayer. “Let's watch it together.”SCREENSHOT: Asia Film Festival. Wed., Oct. 6-Sun., Oct. 10. Various locations.
$5-10 per screening. Free for Pitt students. screenshot.pitt.edu