Degraded images and lost memories are the show’s guiding concepts 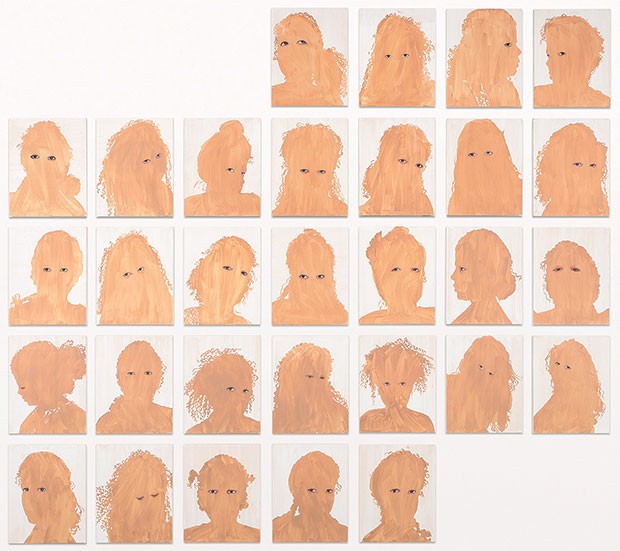 continues through May 21. The Andy Warhol Museum, 117 Sandusky St., North Side. 412-237-8300 or warhol.org
If you admire visual art, do not miss your chance to see Firelei Baez: Bloodlines, now at The Andy Warhol Museum. The work that went into these 17 paintings! Some are 6 feet tall, ink and acrylic labors of love, ranging from figurative to abstract, painted, washed out, scraped and carved, ornamented with hair’s-breadth details. The first pieces to greet you (if you turn right upon entering, and I insist you should) are medium-sized abstractions that look like scorched and blistered film. One title, “The last one who remembers it,” encourages its reading as a degraded image, or lost memory.

Degraded images and lost memories are the show’s guiding concepts. Yes, the exhibit deals with race. Recurring motifs include Afro-picks, panthers and chains. But this isn’t a lecture. The secret of the Dominican-born, New York-based Baez’s work is the intimacy she assumes with us. One large-scale painting features a red-skinned woman wearing an elaborate tignon, the head-covering that women of color were mandated to wear by an old, shamefully obscured Louisiana law so their curls did not tempt white men.

The show is an attempt to engage with the immorality inseparable from the African diaspora, by a working artist whose life is indivisible from it. This is why you should walk right upon entering, so the final work you’re left with is “Can I Pass? Introducing the Paper Bag to the Fan Test for the Month of June,” the embodiment of all the internalized history in the work you’ve seen before it. This piece consists of 28 silhouette self-portraits, featuring only eyes and arranged like a calendar, depicting the artist posing with different hairstyles. Sometimes her hair clouds around her in ringlets; sometimes her hair is flat-ironed. Is the artist a temptress today, or is she wearing her electric tignon?

Baez is most confrontational with the ugly, internalized yet obfuscated race and gender dynamics of the Americas in “Man without a country (a.k.a. anthropophagist wading in the Artibonite River),” a large-scale collage featuring 144 small paintings on the pages of discarded old library books. The books contain, as wisdom, the outdated and discredited theory of Social Darwinism, the idea that social groups are subject to the same laws of natural selection as plants and animals. The concept was used to justify imperialism and racism; once, the prominent intellectual institutes of whole nations were sustained on the premise that if you could take it and rape it, it was meant to be yours. This knowledge enhances the viewing of the work, but it isn’t necessary. A woman’s detached, outstretched arm, brown and furry and tattooed in Caribbean florals, painted on the title page of the book The Decline of Competition: A Study of the Evolution of American Industry, speaks powerfully, and for itself.

Not only is each piece in this exhibit technically impressive and thoughtfully stimulating, each is truly beautiful. Forget that “eye of the beholder” nonsense; the beauty emanates as though it were a physical property of the work, as though the accompanying placards should read “acrylic, ink, beauty on paper,” or as though it should perhaps be included in the dimensions. “Those who would douse it” is encased in its own alcove, wallpapered with Baez’s signature design, the eponymous “Bloodlines,” a coat of arms whose elements include black revolutionary symbols (those picks and panthers) married to Latin American azabache, charms to protect against evil spirits. (It’s a powerful declaration that Black and Latinx are not separate identities, and also a design pattern you aren’t soon to forget, as identifiable in my mind now as Keith Haring’s “Radiant Baby.”)

“douse it” is enormous, and stunning, a magmatic silhouette of a woman with missionaries in her eyes and the colonial architecture of New Orleans and Haiti smoldering in the flames of her burning body. Kant argued that part of the experience of a beautiful object is that it should affect us as though it had a purpose in our lives. I notice most of the pieces in the show are on loan from private collectors.

Baez’s work has been exhibited nationally, and it’s been written about in The New York Times, The Los Angeles Times and Art in America. Firelei Baez: Bloodlines was arranged in 2015 by Pérez Art Museum Miami assistant curator María Elena Ortiz. The Pittsburgh presentation, coordinated by The Warhol’s associate curator of art, Jessica Beck, features three pieces unique to this show. The catalog, sold out at the time of my visit, features an original short story written by Haitian-American author Roxane Gay. It is Baez’s first solo show.