A longtime hot-dog venue is remade into an attractive gastropub, but the execution of the menu needs some attention

Walking into Fire Side Public House, it is impossible not to be struck by the near-complete transformation from the building’s hot-dog-heavy past. The ketchup, mustard and relish color scheme is gone, as are the airbrushed paintings of anthropomorphic wieners. All the vintage whimsy of the former Station Street has been replaced by subdued, slate-gray surfaces, lodge-worthy wrought-iron candelabras and artsy nighttime photos of the city.

Indeed, Fire Side is a place meant to be experienced at night, appointed with darkly gleaming stained wood, tabletop candles and, at the middle of it all, a kitchen in the round, centered on a wood-fired grill, sending sparks into the air and creating a campfire aroma. There’s undeniably a primal appeal to gazing at the fire while cooks adjust the racks and manage the food before the flames.

The effect is contemporary and cozy, and the array of seating options — banquette in the back, high-topped bar tables up front, and stools at the long counter that still divides the open cooking and dining areas — allows for a variety of experiences, from solo to social. 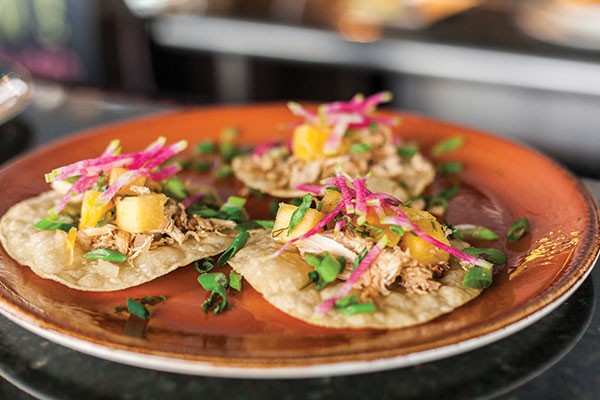 Although Fire Side bills itself a “public house,” the menu lacks the moniker’s British inflection, and is rather firmly rooted in the kind of homey, all-American cooking that has been seized upon by the recent gastropub trend. Wings, burgers, hush puppies, and shrimp and grits, are all upgraded with au courant ingredients such as grass-fed beef, applewood-smoked bacon and brioche buns. But none of it seems designed to impress finicky foodies at the expense of hungry customers; a Quebec burger with poutine and bourbon gravy sounded like it would be well worth the calories.

And the burger itself was delicious. But the curds on top were literally cold to the touch, and so failed to melt and meld with the other toppings. The bourbon gravy was unremarkable. Fries on the side looked great, deep brown with dark edges; but while the first bite was savory with crunch, it was followed by an unpleasant chewiness.

The curse of cold cheese also afflicted the Buffalo chicken grilled-cheese sandwich. Reheated later at home, the sandwich was terrific: thick slices of bread filled with tender, moist pulled chicken coated in “inferno” (actually only moderately spicy) sauce, layered with fresh mozzarella. But as served at Fire Side, the mozzarella was in thick, cool slices, so firm that whole discs dislodged with every attempted bite. This was less a grilled cheese than a cheese (and chicken) sandwich on grilled bread.

Hush puppies, with crab in the batter and bacon crumbled into the remoulade, were love at first bite, but then love turned sour — or rather saline — as salt built on our palates. The texture of the fritters was good, with a medium crust and substantial but light interior, but layer upon layer of salt, in the batter, in the sauce and in the chewy bacon bits, grew to overwhelm the other good flavors.

But even that was better than the so-called stuffed avocado. A grilled avocado half stood upright, surrounded by four poached shrimp and a salsa of diced tomato and cob-cut corn. It looked great, but one ingredient after another proved unsatisfying: The unripe avocado was rock-hard to the point of inedibility, the tomatoes were wintry-wan and flavorless, and the shrimp, somehow both mealy and firm, had little flavor.

This raised concern about our order of shrimp and blue-corn grits, but this came with whole, head-on prawns. They made for a stunning presentation but awkward eating, and while it was slightly better than the previous shrimp in flavor and texture, that wasn’t saying much. We focused on the satisfyingly porridge-like, slightly spicy grits, stirred with aged white cheddar (melted this time) and topped with an over-easy egg.

Wings were the highlight of the meal. They were fried to a beautiful golden brown, like roasted chicken, doused with a garlic sauce, and topped with shreds of Parmesan. We would have liked to transfer some of the salt from the hush puppies to address a salt deficit here, though, and we also found insufficient garlic zing. Fire Side offers a limited, but rotating, selection of wing sauces; the other options when we visited were sriracha-maple-bacon and inferno ranch.

Fire Side has subscribed to a great formula for success: pleasing atmosphere, appealing menu (including many craft beers and cocktails) and reasonable prices. But unless the execution of that menu improves dramatically, this flame might flicker out all too soon.