Finding a place in local history for the modern women's movement. 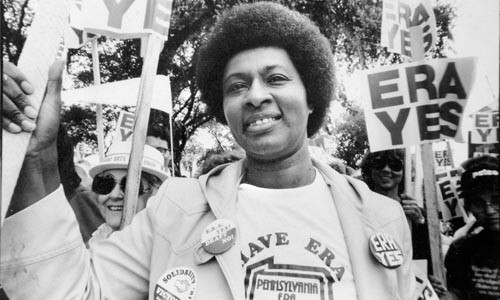 Pittsburgh's role in the struggle for women's rights in the 1970s and '80s was rich, vibrant ... and, now, mostly overlooked. A new project, part of the city's 250th-birthday celebration, aims to change that.

In Sisterhood: The Women's Movement in Pittsburgh is a multimedia project documenting the rise of groups like NOW -- Pittsburgh had the country's fourth chapter and was always well represented in leadership positions -- and Pittsburgh Action Against Rape, the nation's second rape crisis center. The project uses oral histories, photos and other memorabilia from the women who lived and agitated for women's rights in Pittsburgh and across the country.

"I did research on the status of women in Southwestern Pennsylvania, which was a real eye-opener," says In Sisterhood director Pat Ulbrich, who moved here in the 1990s. As a feminist sociologist, she came to Pittsburgh for a career in academia, though she's since become an independent researcher. She also cofounded the Women and Girls Foundation of Southwestern Pennsylvania.

"I also became aware of how vibrant the women's culture was in the '70s and '80s," she says, sipping tea in her cozy Shadyside office, portraits of Pittsburgh feminists leaning against the walls. "When I heard there was going to be a celebration for 250, I immediately thought, 'There really has to be a women's history that's part of the official history.'" So Ulbrich sought -- and won -- a Community Connections grant for her research: "It seemed to me that clearly these feminists had been highly engaged as activists. And it should be a source of regional pride and lots of people should know about it."

It was important to Ulbrich to create "a living document," she says. "Typically, research is about dead people. I decided to use an oral-history methodology, rather than someone interpreting their story."

So Ulbrich and her team of videographers, photographers and Web whizzes interviewed 15 prominent Pittsburghers, and whittled the up-to-six hours of footage from each into a 15-minute video. The videos tell a story of women working together, notably on issues of racism and sexism.

One of the interviewees is Alma Speed Fox, a community activist in the Hill District and onetime director of the Pittsburgh chapter of the NAACP. "There were a number of white women who were members of the NAACP. There was an action against Sears in 1968," for refusing to hire black people, says Ulbrich. "NOW members joined the picket. The feminists in Pittsburgh would never take action on sex without including race. Pittsburgh NOW in the '70s had a policy that you always had to include race when you wanted to make a case."

Eleanor Smeal, president of the Feminist Majority Foundation and past national president of NOW, is also interviewed. "Ellie Smeal argues that the Pittsburgh feminists shaped the women's movement. They did it, and I think that's just an extremely important story," says Ulbrich.

Moreover, Pittsburgh was home to KNOW Feminist Press, which was influential in the nascent women's-studies curricula across the country. The press reprinted syllabi and classic articles from 1970 to 1984 -- long before the Internet put such things at everyone's fingertips. The Allegheny Feminist was a monthly newspaper published from 1977 to 1981. Pittsburgh had a feminist bookstore; The Wild Sisters, a group of young feminists devoted to promoting women's music, who put on shows at libraries and universities; and two women's karate organizations.

The docent-guided exhibit will be at the Pittsburgh Center for the Arts Jan. 9-25, and will travel the region in the coming years. All the hours of interview footage will be donated to the library at the University of Pittsburgh, and made accessible to students and the public.

"If younger people learn about this," says Ulbrich, "not only will they develop an appreciation, they'll learn the fundamentals you can use to bring about change."