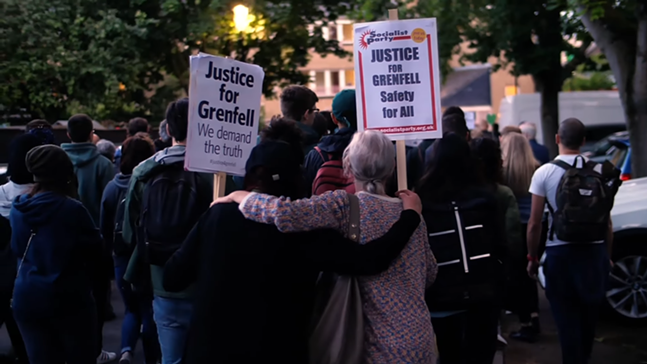 Screencapture from Chris Ivey's new film on London high-rise tragedy
Veteran Pittsburgh filmmaker Chris Ivey has lately shifted his focus from the bulldozed high rises of East Liberty to a burned-out apartment tower in London where, five years ago, 72 people lost their lives.

Separated by 3,000 miles, the vacated housing structures in each case tell stories of inequity. But it’s the role played by Pittsburgh-based manufacturer Arconic that has drawn Ivey’s attention to the Grenfell Tower, a 24-floor building that erupted in flames on June 14, 2017.

Ivey’s particularly concerned that the company’s suspected culpability hasn’t raised enough attention around the Steel City. And in an effort to remedy that, he will be driving a mobile van around Pittsburgh on Sat., June 11, projecting clips from his new documentary, asking: “Hey Pittsburgh, did you know Arconic is responsible for this?”

Headquartered on the North Shore, Arconic is a global corporation that produces a range of metal products for industries including construction, automotive, and aerospace. Ivey was visiting London to work on another project when he learned that Arconic had manufactured the aluminum paneling believed to have contributed to the fire’s rapid spread.

Since the fire, Arconic has ceased producing the paneling products used in the Grenfell Tower, citing complications with international building codes and the ongoing fallout of the London disaster.
U.S. regulations already prohibited the use of the material as a construction material for residential buildings. Ivey says this confirms the company knew of the risks but chose anyway to exploit an open business opportunity.

“People always try to get away with what they can until they get caught,” he says.

Arconic did not respond to a request for comment on the contents of Ivey’s film.

A U.K. civil service inquiry into the causes of the fire has produced pages of findings but remains ongoing. Claude Schmidt, president of Arconic’s French division where the Grenfell components were made, acknowledged when questioned for the inquiry he “hadn’t made it a priority” to learn about safety testing procedures prior to the fire. Seizing on this, U.S. shareholders have filed a lawsuit against the company for mishandling safety procedures, which they say inflicted financial losses.

To Ivey, discussions about profit and loss simply deflect from the human cost at the heart of his documentary, adding, “They talk about record profits, but did they care about record deaths?”

Ivey says survivors who he interviewed remain traumatized, and are frustrated that no one has been held responsible.

“[Arconic has] ducked and dived and wrangled their way out with their billions,” laments one survivor featured in the film.

While the inquiry continues along, buildings built with the same Arconic paneling product remain standing throughout the country.

Ivey intends for his film to have a big impact in Pittsburgh, but he has no plans to screen it in the U.K.

“The work I’ve shown here, I would never want to show in the U.K. … because it would just be too traumatic for the communities,” he says.