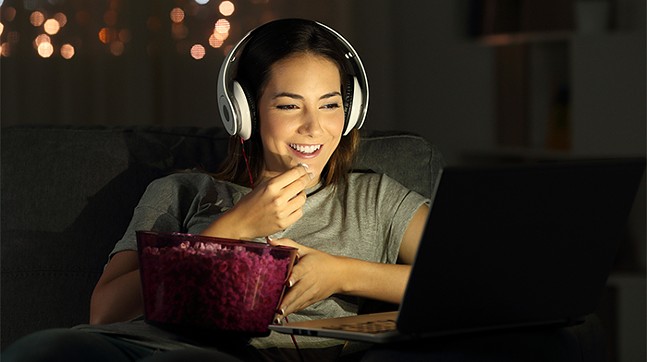 Some area movie fans have gone months without a trip to the theater, opting instead for viewing at home. (Though local drive-ins have seen a boom in business thanks to customers being able to social-distance in their cars.) Now they can look forward to a lineup of new options when Film Pittsburgh brings all the area film festivals together for one big virtual Fall Festival.

Today, Film Pittsburgh announced that the Fall Festival will present 12 days of programming representing various annual local film festivals. This includes the Three Rivers Film Festival (3RFF) and Pittsburgh Shorts, as well as elements of the JFilm Festival, which focuses on films about the Jewish experience, and ReelAbilities Pittsburgh, an event described by Film Pittsburgh as promoting “awareness and appreciation of the lives, stories, and artistic expressions of individuals with disabilities.”

The Fall Festival will run from Nov. 11-22, and all films will stream on the Film Pittsburgh website. Screenings and tickets have yet to be announced, but a press release promises that the Film Pittsburgh programming team has “curated a broad range of new films, voices, and stories from around the world for a truly international festival of high-quality independent films.”

Much like with other arts and cultural organizations and institutions, the event will be presented virtually in response to the COVID-19 pandemic. In the past, each respective festival happened during different times of the year and in various locations, with films playing at places like the Manor Theatre, Waterworks Cinema, and the now-closed SouthSide Works Theater.

This year marks the 20th festival season for Film Pittsburgh executive director, Kathryn Spitz Cohan, who says this year has been “unprecedented.” Even so, the organization believes that pivoting to a virtual festival will bring “increased accessibility and will reach a much wider audience.” Film Pittsburgh also plans on presenting content for “all ages, interests, and backgrounds that can be enjoyed safely at home.”

It also marks a return for 3RFF, which has seen its fair share of troubles over the past few years. In 2017, the festival was canceled after its main sponsor, Dollar Bank, dropped out. Its future seemed uncertain after its first host organization, Pittsburgh Filmmakers, shut down and was absorbed by the Pittsburgh Center for the Arts to create the Pittsburgh Center for Arts & Media. That Center for Arts & Media then suddenly eliminated its film program and laid off staff in 2019, just two days after that year's 3RFF ended.

For the Fall Festival, 3RFF  will "showcase a curated slate of 25–30 independent feature films in a variety of genres, including dramas, comedies, and documentaries," according to the Film Pittsburgh website.

Spitz Cohan believes going virtual and partnering with 3RFF, considered the largest and longest-running film festival in the region, shows that Film Pittsburgh is dedicated to keeping the local film scene alive.

“We are navigating the new landscape of virtual film festivals in response to the pandemic, and incorporating the legacy of 3RFF into our film family,” says Spitz Cohan. “We plan to offer an outstanding selection of independent film at our Fall Festival and continue to make Pittsburgh a destination for independent film lovers.”