On its 40th anniversary, a rescued 16 mm relic offers a curious portrait of a vanished Braddock.

The narrator clearly has an axe to grind. Right off, he calls his short film an answer to "Steeltown Blues," a WQED public-television special from a few years earlier casting the town of Braddock as the very poster child for doomed mill communities.

But if "Jazz From a Very Special Hotel" is the answer, we quickly discern, "Steeltown Blues" must have posed an odd question indeed. The 34-minute black-and-white "Jazz," completed in 1968, follows a "typical" Braddock high school student. It's scored start-to-finish with insistently swinging, Old Country-sounding violin music. And throughout, the narrator extols Braddock's everyday virtues and defensively references "the suburbs," to which, and to whose detriment, he compulsively compares Braddock.

It turns out that the story behind "Jazz" is at least as interesting as the film itself.

"Jazz," which simultaneously gets a 40th-anniversary screening and its public premiere at the Dec. 9 Film Kitchen, was born at Braddock's St. Thomas District High School. It's "the oldest Catholic high school west of the Alleghenies," boasts the narrator. He is Laurence Taylor, the St. Thomas English teacher who, irked by "Steeltown Blues," recruited 11th-graders to help him show that there was life in Braddock yet.

The film, shot in the shadow of U.S. Steel's Edgar Thomson Works by students with little prior film experience, follows protagonist Raymond into the classroom, and to a school dance, the playground, a pool hall, and a job in Braddock Avenue's Blumenfeld Food Market.

Ray and his pals swim in the Mon. (Unlike suburban swimming pools, notes Taylor, "There isn't any chlorine in the water to hurt your eyes, either.") Ray meets a new blonde classmate named Sharon, and they goof off, hit a movie at nearby Edgewood's spectacularly marqueed Regent Square Theater, and then the soda shop. Because the film was shot without synchronized sound, Taylor himself voices all the kids' dialogue. And with a sort of shockingly disproportionate bravado, Taylor declaims the film's valedictory closing lines, taken from the William Saroyan play Time of Your Life: "In the time of your life, live -- so that in good time there shall be no ugliness or death for yourself or for any life your life touches."

Taylor died several years ago, but many of the schoolkids who helped make "Jazz" are still around. One is William Welsh, who helped write the story and appears briefly in the film. Welsh recalls Taylor fondly. "He was a sweet guy. Gentle person. Very concerned with education," says Welsh. "Took a lot of pride in the fact that he prepared students for college."

Though "Jazz" had been screened at the school on its completion, and at reunions, the 16 mm print had been long lost until Welsh unearthed it. Welsh, now of Shadyside, says Taylor's grievance with "Steeltown Blues" was that it suggested people from Braddock had no future. "He felt the teachers and the schools in the area did a pretty good job," says Welsh, himself a published writer whose books of prose and poetry include Can't Get There From Here.

Welsh says the film's swimming sequences were shot in winter. "I do remember them boneheads jumping in the river under the Rankin Bridge in January," he says.

The film's soundtrack, meanwhile, was performed by a troupe of ethnic Gypsies who lived in North Braddock, Welsh says. Taylor hired them to watch the film at the school, improvise the score and record it live to reel-to-reel tape in the hall outside the gymnasium.

In recent years, with Mayor John Fetterman catalyzing involvement by young people and the arts community, the town has seen new life, including an artists' co-op and even an organic urban farm. But Braddock's long-term story -- foretold, after all, by "Steeltown Blues" -- is one of a decline that saw a bustling city and nightlife hub of more than 20,000 become today's low-income near-ghost town of some 2,700.

"Its decline started really in the late '50s," notes filmmaker and Braddock native Tony Buba. The problem was not just early signs of trouble within the U.S. steel industry, but also the suburbanization Taylor decries in "Jazz," with Miracle Miles luring away shoppers while families lit out for the subdivisions.

In the 1970s and '80s, Buba earned international acclaim for his intimate documentary portraits of Braddock battling decline. But he's fascinated by earlier attention for his birthplace, such as "Steeltown Blues." (The documentary was directed by fellow Braddock native Joe Pytka, who'd gain fame directing TV commercials for Pepsi, Nike and McDonald's, and feature films including Space Jam).

Even "Jazz" foreshadowed Buba's work: Welsh's role, for instance, was that of a bespectacled if baby-faced "used-car dealer" on the lot of J. Roy Used Cars, later immortalized in Buba's classic portrait of its indefatigable namesake and proprietor.

The Dec. 9 Film Kitchen also screens "Shut Down" (1973), an early Buba short about independent truckers in Ohio staging a work stoppage to protest rising fuel prices, and "Where Did Fish Go in Winter?", a short by University of Chicago grad student Chai-Pi Choa. Buba and Welsh will attend the screening.

"Shut Down" in particular -- with its truckers both decrying the Vietnam War and loading their rifles in case rival Teamsters come after them -- feels like a telling counterpoint to the sometimes forced innocence of "Jazz." But while Welsh admits "Jazz" is (almost literally) "sophomoric," he validates the film. "It was a snapshot of the history," he says. 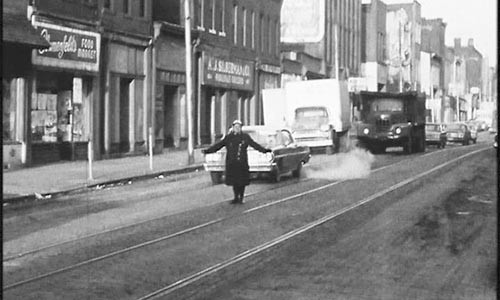