Film Kitchen delivers lunch in India with The Dabbawallas.

In Mumbai, India, a venerable organization known as the dabbawallas delivers more than 100,000 hot lunches a day. With some 4,500 employees, theirs is a system at least as complex as FedEx's, run without telephones, computers or delivery trucks. Indeed, most of the workers are illiterate; yet their error rate is by some calculations virtually nonexistent.

Paul Goodman, a professor of organizational psychology at Carnegie Mellon's Tepper School of Business, learned about the dabbawallas while on assignment in Mumbai. The Dabbawallas, his internationally televised 2001 documentary, highlights the Tue., Nov. 14, installment of the Film Kitchen screening series.

Goodman has taught at CMU for nearly 30 years. His video work sprang from his desire to do more than just talk about what people's jobs were like, and why they did them. "It seeemed to me it would be much more interesting to bring the workers into the classroom," he says. The short videos of his series "The Changing Nature of Work" document in-depth interviews with coal miners and high-end finance workers, a stone carver and a diner waitress, among others.

The "Work" videos, now used at universities worldwide, are meant to make students think about what motivates people at work, and about issues of the global work environment -- such as how a Latin string quartet differs from its Chinese opposite number.

Goodman travels frequently for international CMU education projects. Amid the roil of Mumbai's 16 million souls, he found both the dabbawallas and -- thanks to that nation's massive film industry -- a local producer and small film crew to document them. Over the course of a year, with help from such CMU collaborators as veteran documentarian Ralph Vituccio, he shot footage capturing what he calls "an example of the power of human and social ingenuity."

By some estimates, the dabbawallas have been around for a century. Their services have permitted Indian workers, despite increasing urbanization, to continue the custom of eating homemade meals. The food is kept warm in metal canisters that the dabbawallas -- roughly translated as "box people" -- collect at individual households and, on foot, by bicycle and by rail car, deliver to the right workplaces based on a series of colored markings on the containers themselves.

Yet Goodman attributes the dabbawallas' success less to technical prowess than to psychology. "[T]hese people are incredibly committed," he says, largely thanks to the family ties that root the organization, and to community-building customs including group prayer.

The Dabbawallas still screens on U.S. public-television affiliates; it's also aired in France, Italy and Arab countries. The hour-long work includes exclusive footage of India's rail system -- from shoots that required special permission from the government -- and a soundtrack of ragas recorded especially for the film. Meanwhile, the dabbawallas themselves have gotten more famous: They've been spotlighted on India's MTV and singled out by Prince Charles on his recent visit to India.

"I see these [films] as ways of having people learn about other countries," he says. "Most of our life is spent at work ... It's celebrating that part of life, and at the same time asking, 'Why do these things work?'" 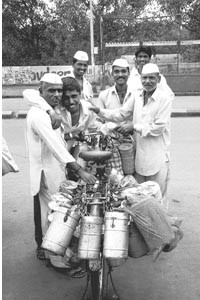 Lunch tickets: Some stars of The Dabbawallas.