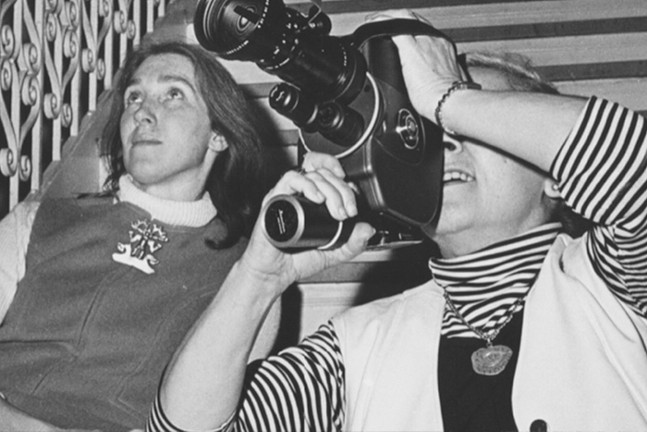 This year’s Association of Moving Image Archivists conference — touted as the largest gathering of archivists in the world — is being hosted here in Pittsburgh this year. Unfortunately, for all you archive heads out there, the conference itself is for industry professionals only (and $400 to attend).

But have no fear — on Wed., Dec. 7, this roving gang of film archivists will descend on the Harris Theater for a day of screenings that are all free and open to the public.

The lineup highlights the work of Pittsburgh filmmakers and artists, including those currently working and who made films during the heyday of Pittsburgh Filmmakers. The day starts with a rare screening of Experimental Curator: The Sally Dixon Story, a documentary about the groundbreaking Carnegie Museums curator who founded one of the first museum-based film programs in the country. It’s a rare chance to see the film, which presenter and archivist Steven Haines notes has been screening for the last year, yet "it hasn’t played here yet," with the exception of a single showing at 5 a.m. on WQED earlier this year.

Haines’ program is one assembled via his work as a microcinema curator with Flea Market Films and Pittsburgh Sound + Image.

“In many ways, my program at AMIA is the culmination (thus far) of the work I’ve been helping with over approximately the last five years to locate amateur, independent, and experimental films and videos made in Pittsburgh in decades past,” Haines says.

He adds that most of the films have not screened for audiences before, and have not been seen in 40-plus years. The current list of filmmakers represented includes J.T. Vale, Natalka Voslakov, Harriet Stein, Rich Moore and Mike Cantella, Gary Kaboly, Joan Cicak, Tippi Comden, Dane Todd, Francis Lackey, and Peggy Ahwesh.

Many of the films Haines is showing are digital transfers from some of the only surviving copies. “Joan [Cicak] even told me that the print of her film Dream Baby Dream is the only copy that survives anywhere of any of her films! And it’s such a beautiful one. We’re lucky to have it," says Haines. (If you can’t make it to the event, Haines told me he’s planning to put on a more public showcase of his Pittsburgh Filmmakers collection next year.)

The program also includes Jacaranda Joe, a long-lost George Romero film that screened virtually earlier this year through the University of Pittsburgh Library System. Participant Adam Hart describes it as “an adaptation of a project about an outdoorsy TV show that stumbles across a community of Bigfeet in the woods.

"[Romero] tried to make it in the mid-1970s but it never got off the ground," says Hart. "At some point, the plan was to have at least one Pittsburgh Steeler in the cast for that original project, called The Footage."

Ben Rubin, currently the Pitt Horror Studies Collection Coordinator and one of the program’s presenters, found a blank VHS with “Jacaranda Joe” written on it while going through the Romero collection. Because of the pandemic, the video transfer was delayed.

“We had to wait months before we could find out if the VHS tape was the film itself or footage or, I dunno, actor auditions or something like that,” Hart says.

Once they confirmed that the tape was, in fact, a rough cut of the film, Hart reached out to people connected to the Florida college program that provided the crew for the shoot. He managed to rustle up “a more complete, higher resolution" digital videotape of the film from Michael Sellers, the film's first AD, which is the basis for the version being shown at the Harris.

“I’m very excited to present this to an actual, physical group of people," says Hart.