In one room, raku bowls with pelvis-bone feet invoke the ancient trope of body as vessel 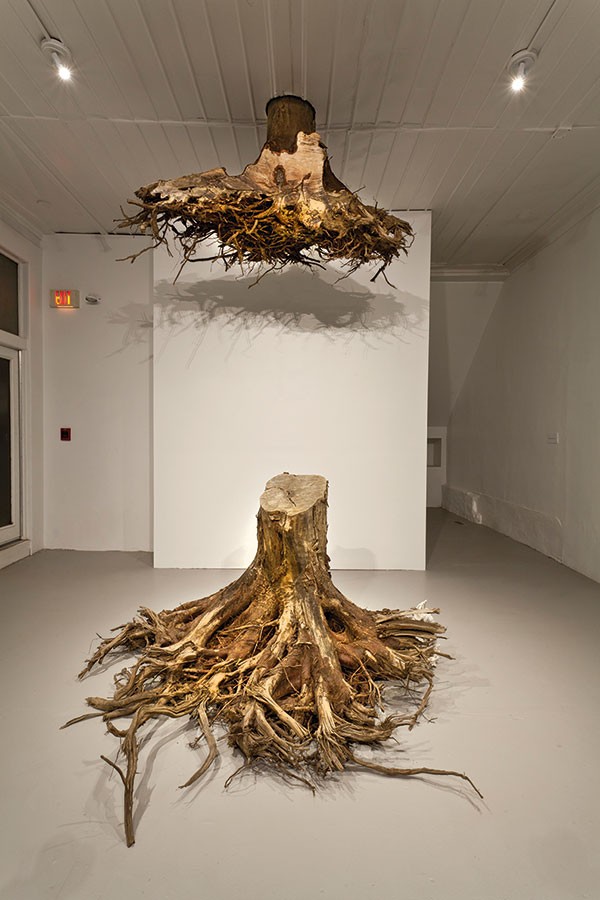 It's been more than 20 years since Janine Antoni arrived with a splash, combining performance and sculpture in works to which the artist's body was central — chewing up chocolate and lard in "Gnaw" or using her hair as a paintbrush in "Loving Care," both in 1992. These and later artworks by Antoni helped revitalize installation art, providing fresh alternatives to sculpture's tradition of monoliths-and-monuments. Curated by Margery King and occupying most of the Mattress Factory's Monterey Street townhouse, Antoni's interventions and displays (all from 2013) exist somewhere between a conventional one-person exhibit and a building-wide installation.

Entering the ground-floor gallery, we're faced with "Graft," two large tree stumps with roots intact. Close examination reveals that the stumps were previously joined and have been cut apart. Theatrically positioned as objects of contemplation, one stump is suspended with its trunk extending into a hole in the ceiling and the other sits on the floor; coiled at its base, somewhat inexplicably, is a casting of two entwined spinal cords.

Heading up the stairs to the second floor in search of interpretive cues, we encounter the top of the tree trunk, from which "grows" a wood table displaying cast body parts. The body parts are sculptures in their own right, illogical combinations of elements: an arm holds a heart in the crook of its elbow; a head has sections of pelvic bone attached to it, looking like parasites; a section of neck empties into a cup-like cast of a breast. The female body here appears — albeit in fragments — as natural, sculptural, wondrous and subject to alteration, much as a tree can be formed into a table.

In another room, raku bowls with pelvis-bone feet invoke the ancient trope of body as vessel. And upstairs, in "Crowned," a rough-hewn crown molding looks as if it could have been original to the room, except that it culminates in yet more castings of pelvic bones, which were used to sculpt the shape of the molding.

At the end of the line is "Honey Baby," a video produced in collaboration with choreographer Stephen Petronio. A back-lit male figure heavily coated with honey slowly tumbles in a space that initially appears gravity-less but turns out to be a tunnel, or canal, providing necessary support, tethering consciousness to corporeal reality.