First they berated it. Then they burned it.

That was the response of Hill District community members to the Community Benefits Agreement proposal made by Mayor Luke Ravenstahl and County Executive Dan Onorato on Jan. 3. At a press conference four days later, Hill leaders denounced the proposal as a "tremendous insult," and then set a copy of it aflame on the steps of the Hill House Kaufmann Center.

"So far, all we've heard is just a lot of hot air," announced one speaker, the Rev. Thomas Smith, of Monumental Baptist Church.

And things soon got hotter: At the press conference's conclusion, while reporters watched, one community member set fire to the proposal.

For months, the One Hill Coalition, a grassroots movement of nearly 100 community groups, has been seeking a CBA. In its vision, the agreement would be a legally binding contract to ensure that, when a new hockey arena is built for the Penguins, the long-neglected Hill benefits as well. Its efforts have been modeled on successful initiatives elsewhere in the country. Residents of Los Angeles, for example, successfully negotiated a CBA with city officials in 2001 upon the construction of the Staples Center. The agreement guaranteed living-wage jobs, affordable housing, local hiring and funds for parks.

But One Hill representatives say the city has been dragging its feet on talks. [See "History Repeating?" City Paper, Dec. 20, 2007]. And the coalition's chief negotiator, Evan Frazier, claimed that Penguins and city officials have ignored many of the community's requests.

"This is not a CBA," said Frazier, who was particularly upset that some members of the media learned of the city's proposal before members of One Hill did.

"'Agreement' means both parties agree," read a written statement issued by One Hill. "[T]he community has shown tonight that they don't agree."

Ravenstahl and Onorato's three-page proposal makes few binding commitments (though it does pledge that the Penguins will provide "opportunities for Hill District youth to participate in sports [and] attend Penguin games"). While it expresses "support" for a long-sought grocery store in the Hill, the proposal promises merely to "use good faith efforts to cause that to occur." While residents seek job guarantees, the proposal pledges only that "[e]mployers for the arena project will be encouraged" to hire from the community. The agreement is short on promising new government programs, focusing instead on assessing services currently provided, and helping to "refer residents to appropriate existing … programs."

"The document delivered to One Hill is nothing but vague promises and general concepts," One Hill's statement reads.

"The level of specificity in their proposal is really way less than most [CBAs]," says Tom Hoffman, executive director for Pittsburgh United, a member organization of One Hill. "Other CBAs are very specific and spelled out."

One of the proposal's biggest shortcomings, say activists, is that it lacks a plank to establish a community-development fund. Community advocates have persistently demanded such a fund, and sought to control it themselves: Government agencies and other outside parties, they say, have run roughshod over their needs for decades. Ravenstahl, however, has adamantly opposed such a fund.

"I know there were demands for direct funding to Hill organizations," Ravenstahl told City Paper on Jan. 3. "But I was never convinced that it was appropriate."

"I don't expect any major changes" to the proposal, he added, predicting that the community as a whole would embrace it.

That was before it was burned to ashes, however, and Ravenstahl could not be reached by press time for comment on the Jan. 7 event. Spokesperson Alecia Sirk told CP that Ravenstahl's "position to date has been one of cooperation.

"He's not very inflammatory," she added.

But if Ravenstahl isn't willing to make major changes to the agreement, the debate may become even more heated.

"The mayor and the county executive shook hands, but they haven't made an agreement with the community," says Carl Redwood, chairman of One Hill and head of the Hill District Consensus Group, a consortium of Hill community organizations. "They put it out like it's a done deal without negotiating with anybody." The current proposal, he says, is more of a "Penguins Benefits Agreement," since the new arena will create millions of dollars in revenue for the hockey club while pledging little to the community.

Redwood says the group hopes to meet again with officials and the Penguins to re-negotiate the agreement.

"Until we have a CBA signed, we will not support [arena] development," he said. "We will actively work against it." Activists plan to show up at a City Planning Commission meeting Jan. 14 and urge commissioners to postpone voting on the project. (Commission approval is necessary for arena construction to go forward.) Beyond that, Frazier said, there have been some talks about potential legal action, but he would not go into details.

In any case, he said, "We want to make sure that what happened 50 years ago never happens again."

What happened 50 years ago, of course, was the construction of the current arena. In the name of slum clearance and urban renewal, officials relocated 8,000 residents and 400 businesses out of the lively, if hardscrabble, community.

"They believed they were doing what was best for the community," says Greg Crowley, a vice president for the Coro Center for Civic Leadership, whose book The Politics of Place studied local efforts to stop urban-renewal projects. "The idea to wipe it clean and start over appealed to a lot of people."

But instead of improving the Hill District, Crowley says the arena ruined the neighborhood. Thanks in part to a lack of funding, officials failed to follow through on promises to provide new, quality housing, as well as jobs. "Eventually," he says, "the project just died."

This time around, community leaders are trying to prevent such promises from being broken. But while their efforts haven't produced a binding CBA so far, Crowley believes their efforts have made a repeat of the past unlikely.

Back then, he says, "No one was going to bat for residents of the Hill.

"When you compare what they have done here with the CBA to what they had then, you have to give them credit," he adds. "They've come a long way." 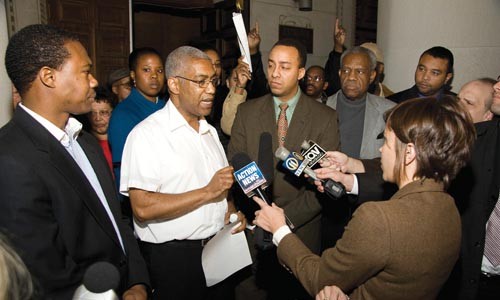 Brian Kaldorf
One Hill Chairman Carl Redwood answers questions from reporters about the Community Benefits Agreement between the Pittsburgh Penguins and Hill District Community groups. After they were done talking about it, group members burned it.