One day, on a drive up the Perry Highway, something caught Jason's eye: an old-school neon sign ("COCKTAILS," "STEAKS") ringing the porch of what appeared to be an old house by the side of the road. That neon did its job, emblazoning a mental note on Jason's brain to return to the house-turned-restaurant, Magoo's.

By the time we did so, though, the neon was gone, and so was Magoo's. The restaurant, now known as Fiddlers Bar and Grill, announced itself with signage that was much more modest and, truth be told, less eye-catching. But the ownership, we learned, is the same, and the interior was as attractive and friendly as that old neon sign had suggested. Since the structure is, indeed, a big old house that has been opened up on the first floor, it retains a cozy, domestic feel. Real wood paneling in a warm cherry tone helped to balance the raucous effects of the ubiquitous flat-screen TVs in the dining room, not to mention the projection screen -- right where the old hearth used to be, no doubt -- that dominated the space.

The menu consisted of what we might call refined bar food. None of the dishes was particularly upscale, but many were quite creative, such as a burger topped with fried egg, cheese, mashed potatoes and -- wait for it -- syrup. Others, such as grilled-mahi mahi tacos, flatbread with sundried-tomato pesto, and apricot-almond salmon, were clearly targeted at people seeking more than just to put down a base layer for beer.

We couldn't resist loading up on starters and, while we were at it, a half-dozen wings, since we had happened to arrive on wing night. These arrived studded with melted, freshly grated Parmesan cheese, a nice step up from powdered Parmesan mixed into the sauce, but were otherwise disappointingly bland. Like all our dishes, however, it was attractively arranged, with a garnish of mixed greens that was prettier and tastier than parsley.

Mahi mahi tacos were filled with substantial chunks of moist, meaty grilled fish and something called chipotle-lime slaw, although its chipotle flavor wasn't particularly pronounced and the cabbage was in large enough strips that it functioned more like a secondary taco filling. Its crunch complemented the moist, meaty fish, however, leaving the tortillas -- lifeless and slightly gummy -- our only real complaint.

Pesto spinach and goat cheese flatbread was beautiful to behold, with the pale green of the pesto oil overlaid with vibrant spinach and lightly browned goat cheese. The flavors came together beautifully as well. Our only caveat involved the flatbread itself, which lacked any noticeable crisp or crunch. Sweet Thai calamari, cut into largish rings, was coated in breading substantial enough that it retained a bit of crispness beneath the sweet chili glaze, but still allowed the tender-firm squid within to shine.

Jason was seduced by the fried slaw dog, a big beef wiener beer-battered and deep-fried, then topped with cole slaw, red onions and spicy brown mustard. To be honest, amidst all those toppings, it wasn't clear how much the beer batter contributed, but the whole kaboodle -- served on a sausage roll to contain it all -- tasted pretty great. The mustard, not an obvious choice with the slaw, added a welcome little kick.

Betting that tomato season was not quite over yet, Angelique had the Caprese burger, topped with fresh buffalo mozzarella, sliced tomato, basil and a balsamic glaze. This is such an obvious upgrade of the classic cheeseburger that we are surprised more restaurants don't offer it. The toppings were a last, fresh taste of summer, but the moist, loosely packed burger patty was under-seasoned. On this burger, the strongest flavor came from the glaze, whose sweet-tart balance was on the syrupy side. A dining companion's Boursin chicken, too, offered poultry which was a base for its toppings of cheese and Portobello mushrooms.

We were beginning to detect a pattern. The next dish to conform was "gourmet" mac-and-cheese. When we see mac-and-cheese so described on a menu, we think of a blend of cheeses far more sophisticated than the glorified cream sauces that slicked our noodles when we were kids. Fiddlers' was made with a blend of Asiago, Parmesan and Romano which our own kids deemed "bland."

Fiddlers offers above-average bar food in a welcoming atmosphere. But like its signage, some of its dishes could use a little more flash. 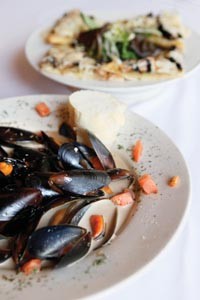