Defining fiber art can be difficult. It's a blanket term that can encompass processes like weaving and knitting, and materials like glass, fabric, and paper. At its core, the field is about texture and physical space, but its meaning is consistently being challenged and reimagined. And it's sure to be expanded again when the 23rd Fiberart International exhibition returns to Pittsburgh on Fri., May 31, with pieces from 55 national and international artists.

Among the 56 pieces on display is "Wave" by Serbian artist Zlatko Cvetkovic, a jagged installation woven from recycled audio and video magnetic cassette tape that, as one description puts it, comments on “the phenomena of ephemerality and oblivion.” Then there’s Virginia-based artist Meg Roberts Arsenovic whose "Tell Tales" uses orange PVC utility flags.

The show, which happens every three years and is now in its 23rd iteration, expands beyond its usual spot at Contemporary Craft by also setting up at the Brew House Association on the South Side.

“The Fiberart International has always been one of our favorite exhibitions because it is so accessible and appeals to visitors on many different levels,” says Contemporary Craft executive director Janet McCall. “Textile art is an art form that has been practiced for centuries. It emerged from the necessity to fill basic human needs and has evolved into an expressive medium that is powerful in its universal appeal and contemporary relevance.”

The chosen artists, adds McCall, also use their work to “explore the relationships between fiber and social influences, and make a statement on social topics such as gender issues, politics, mental health, feminism, and the environment.”

Canadian artist Susan Avishai comments on the wastefulness of the garment manufacturing industry with “No Place to Hide a Dark Heart,” a fiber sculpture made of deconstructed, discarded clothing from thrift shops. Patricia Kennedy-Zafred of Murrysville, Pa. draws attention to the decline of the independent family farm with "American Portrait: Loss in the Heartland," a piece using fabric, dyes, silkscreens, and ink.

Contemporary Craft will also bring Fiberart International Downtown to its BNY Mellon Satellite Gallery with "Elemental Fiber," a series of quilts by Kathy Nida. The California-based mixed media artist uses her colorful quilts — six of which will be on view at the gallery through Aug. 18 — to address issues such as women’s rights, politics, climate change, and gun control.

“We believe it is important to show these because art can open up discussion on difficult social issues and prompt conversation among viewers with different perspectives,” says McCall. “The artists’ lived experiences as conveyed through their work can also encourage others to share their stories to form a more inclusive community.” 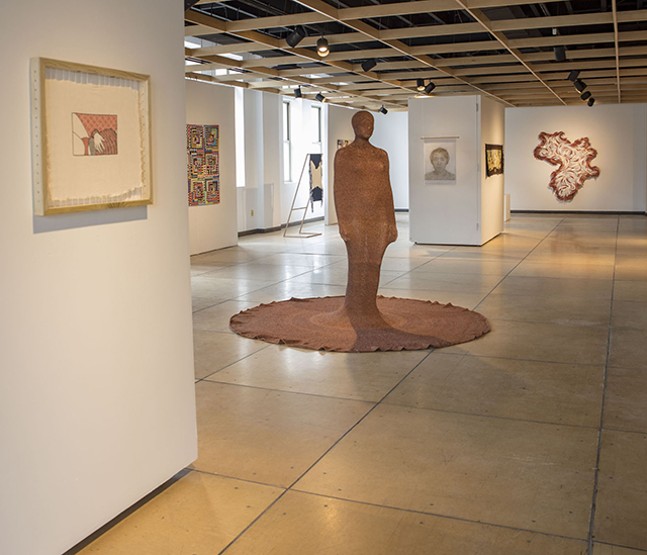 Complementing the exhibition are various events and programming with exhibiting artists, including a day-long forum on Sat., June 1 that features a keynote speech by Fiberart International juror and renowned basket sculptor Jane Sauer. Also available is an intro to sculptural beading with artist Beth Blankenship and a glass-knitting workshop with Carol Milne (the process involves knitting with wax and casting in glass).

Generated and operated by the Fiberarts Guild of Pittsburgh, Fiberart International continues the mission of a fiber arts movement dating back to the mid-20th century, when a group of craftspeople became frustrated with how textiles were ostracized from the fine art world.

“There were a lot of artists working at that time who really thought that this was wrong,” says Fiberart International director Risë Nagin, adding that textiles could be used to make objects that were “expressive in a way that a beautiful sculpture or a beautiful painting would be.”

Nagin feels that fiber arts have not only secured a place in the fine art world but have become a “general art practice,” even among those who “don’t necessarily think of themselves strictly as fiber artists.” The observation is backed up by local artists like Fiber Arts Guild member Tina Williams Brewer, whose story quilts have earned her a variety of distinctions, including the 2018 Pennsylvania Governor’s Award for Artist of the Year.

“Textiles are moving more and more into mainstream art,” says Nagin, “and I feel like this show is an articulation of that visually.”