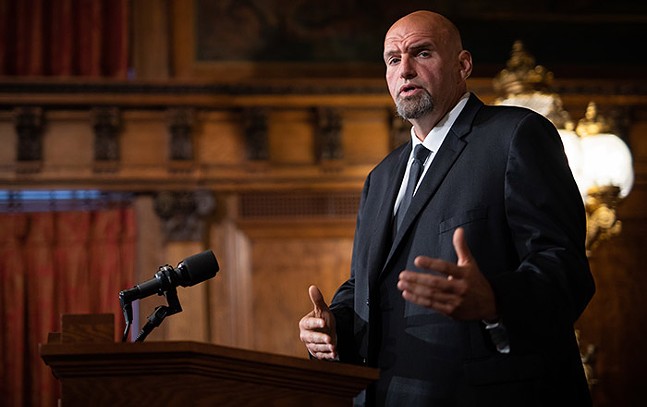 In December 2013, Fetterman chased a Black jogger in his pickup truck after hearing what he thought were gunshots while playing outside with his son, according to media reports. He then held up the unarmed man, Chris Miyares, with a shotgun while waiting for police to arrive.

Fetterman said he didn’t know the race of the individual when he began his pursuit and did not point the shotgun at Miyares, and did not chamber a shell. However, Miyares counters that Fetterman did point the gun at his chest.

The police arrived soon after, found Miyares was unarmed, and let him go.

No charges, against Miyares or Fetterman, were ever filed. Miyares claimed the sounds Fetterman heard was kids using fireworks, not gunshots.

This story made its way into national news coverage, as well as the Capital-Star’s, after Fetterman’s announcement. It was referenced in a statement on Fetterman from retiring GOP Sen. Pat Toomey’s campaign.

In his first public interviews after the incident resurfaced, Fetterman was unapologetic.

“It hasn’t changed me,” Fetterman told FOX-43 in York, Pa. “The truth is, Braddock had a gun problem, Braddock has a gun problem. Philadelphia has a serious gun violence problem. I can’t be afraid of the consequences of doing the right thing.”

In a statement, Fetterman argued the attack was from a "bunch of Republicans who have never given a damn about racial justice” and who “launch these bad-faith attacks from the safety of their gated communities.”

He also released a campaign video addressing the incident, which couches his reaction as a split-second decision made due to concerns about violence in Braddock, a majority Black milltown just outside of Pittsburgh. He was mayor of the borough from 2006 until 2019.

But both parties have been aware of the jogger story. One Democratic political operative told the Capital-Star earlier this week that while the story was on their radar as early as Fetterman’s failed 2016 U.S. Senate campaign, it hadn’t been heavily used or taken hold with the wider public.

Running as a left-of-center populist whose emphasized racial justice in criminal enforcement, the incident could make Fetterman’s pitch even more complicated.

Some in Pittsburgh politics are skeptical of him. And Fetterman’s vocal support for fracking and organized labor over environmental issues has earned him some distrust among the broader Pennsylvania left.

As a western candidate, Fetterman already had to make it a priority to engage with voters from the southeast, including the diverse population of Philadelphia and its suburbs, according to political consultant Mustafa Rashed.

While the issue may not have garnered much attention in 2016, Rashed added that “in the era of George Floyd it’s something that bears more scrutiny.”

Regardless of the man’s race, Rashed noted it was odd for an elected official to “run down civilians with a firearm in a privately owned vehicle, civilians not observed in any criminal behavior.”

And as a Black man who goes on runs, Rashed said he thought Fetterman should apologize to Miyares.

“I think law enforcement, and civilians, and elected officials have that responsibility to not engage with African Americans, particularly African American males under the cloud of suspicion with no justification,” Rashed said.
Stephen Caruso is a reporter with the Pennsylvania Capital-Star where this story first appeared.